You say you want a revolution? How about this for a set of circumstances — Your country starts and immediately loses one of the most useless and foolish wars in its history. Your leader and president-for-life abdicates and flees to England. Your city is bombarded, besieged by enemy troops, and starved into submission. Any remnants of a national government flees the capital, leaving its population to fend for themselves. 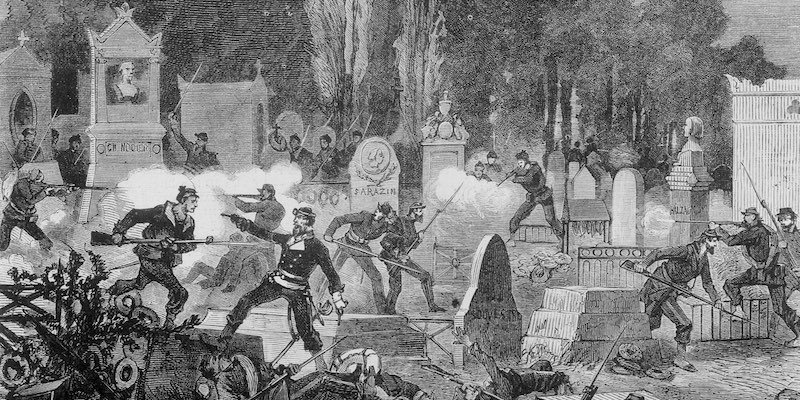 A battle at Père Lachaise Cemetery in May 1871

The Franco-Russian War of 1870 resulted in the dissolution of the empire of Napoleon III and left Paris in a shambolic state. In the resulting political power vacuum a spontaneous radical, socialist, and anti-religious republic was established in the city called the Paris Commune. At odds with the national government (now located in the former royal enclave of Versailles) the short-lived (March 18 to May 28, 1871) Commune resulted in further death and destruction. Let's explore this brief, turbulent chapter in the life of the city by visiting some of the sites of the Paris Commune. 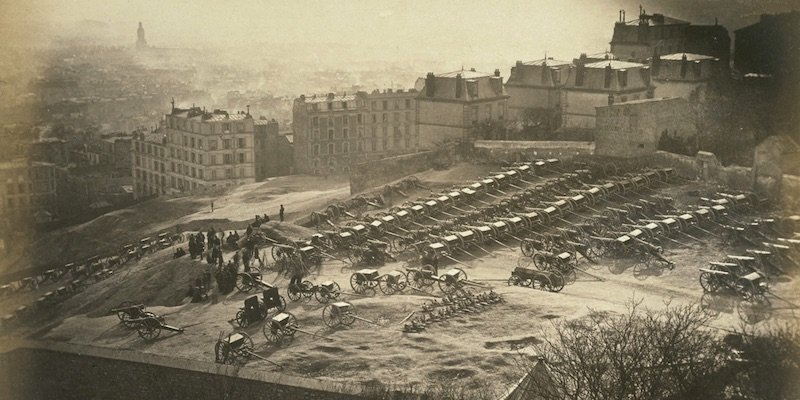 The Cannons on Montmartre, March 1871

Following the abdication of Napoleon III, Adolphe Thiers became the head of the national government. He was disliked in Paris after he unilaterally surrendered to the Prussians, ceded the French regions of Alsace and Lorraine, and allowed the Prussian army to parade down the Champs-Elysées. The dislike was mutual, and the conservative Thiers was eager to suppress what he viewed as revolutionary elements in Paris. 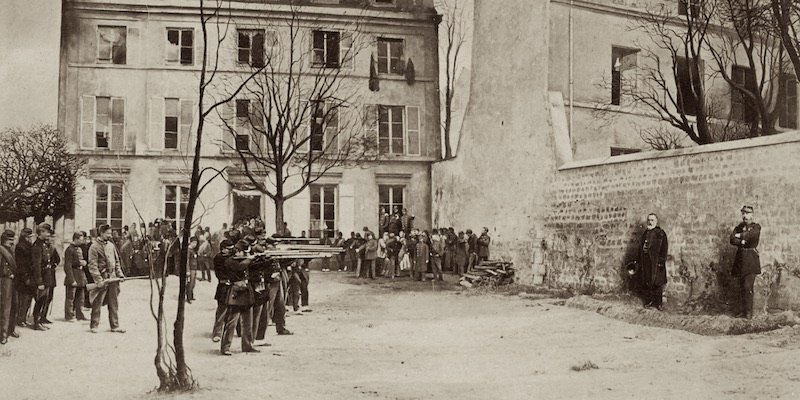 Execution of Versaillais generals March 18, 1871. (Photo may be of a reenactment.)

The last straw, though, was the "cannons affair". 227 cannons were seized from the National Guard just before the parade of the Prussians and removed to the hills of Montmartre and Belleville. On the night of March 27, 4,000 French army troops stormed Montmartre to retrieve these guns, but found themselves surrounded by a crowd of Communards and Fédérés. (These two terms were to become interchangeable. The French army troops were referred to as Versaillais.) 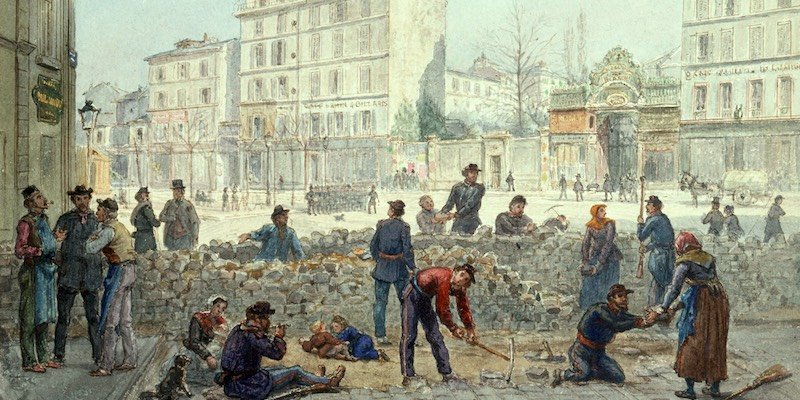 Barricades at Place Blanche, March 1871, in this illustration by Jean-Baptiste Francois

Two Versaillais generals were seized and shot (despite the intervention of future World War I Prime Minster Georges Clemenceau, then the mayor of the 18th Arrondissement) and across Paris barricades were erected by Communards. Imagine, if you will, Place Blanche and Rue Lepic blocked by barricades. (Actually, you don't have to image it; there's an illustration just above.) Thiers and his government quit Paris for Versailles, the very symbol of royal power.

Our Guide to Montmartre 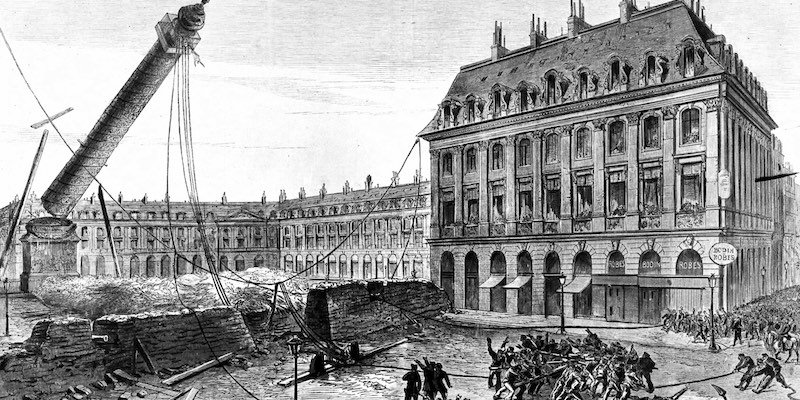 Felling of the Vendôme Column

After the departure of the Versaillais, the Paris Communards organized elections and a new city council begin sitting on March 28. It was a very diverse group with mostly republican and socialist tendencies that included thirty-three artisans, twenty-four intellectuals, six workers, and one painter — Gustave Courbet.

Certain elements of the Fédérés embarked on a mission to eliminate what they considered to be symbols of imperialism and ruling power. One of these was the column in the center of Place Vendôme. Napoleon had created this monument in 1810 to commemorate his victory in the battle of Austerlitz. Its bronze spiral frieze was made from 1,250 canons captured during the battle. And, of course, the perfect way to cap off the monument was with a statue of Bonaparte himself. 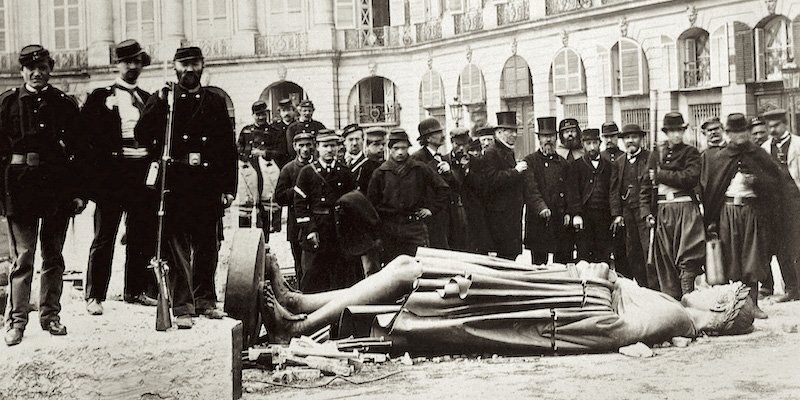 Destruction of the Vendôme Column. Could that be Courbet in the dark beard, center right?

In the middle of May 1871 a group of Communards equipped with ropes, pulleys, and scaffolding pulled down the 44-meter-high column, sending the statue of Bonaparte crashing to the pavement of Place Vendôme. Courbet may or may not have been involved in the demolition, but post-Commune he was the one who was blamed. (Photo portrait of Courbet.) Courbet was later convicted of the destruction and ordered to pay the cost of rebuilding the column. Instead, he fled to Switzerland, where he died a few years later. 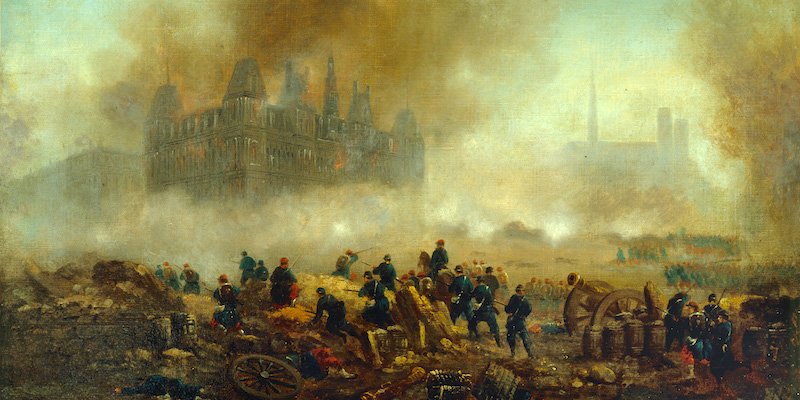 Within days of the felling of the Vendôme Column the national government brought the full force of its army down on the city. Versaillais troops started bombarding and invading Paris; the levels of violence and destruction mounted. May 21, 1871 saw the beginning of La Semaine Sanglante (Bloody Week), bringing further death and devastation to the Ville Formerly Known As The City Of Light. 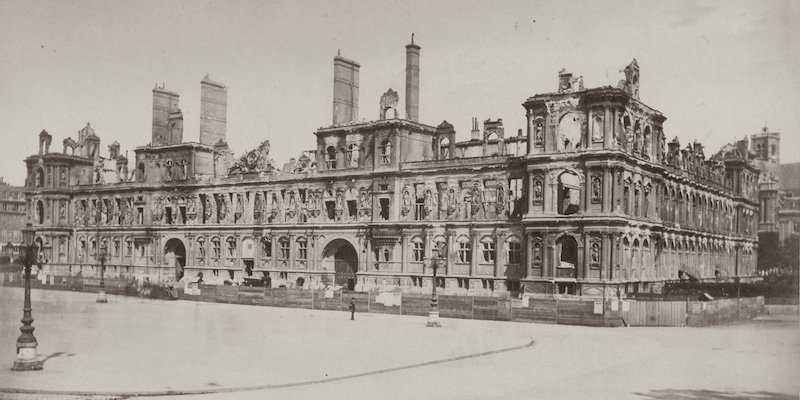 After the fire, shell of the Hotel de Ville

On May 24 the Hotel de Ville was among a passel of buildings torched by the mobs. The fire here and at the Palais de Justice destroyed not just buildings, but centuries of civic records. 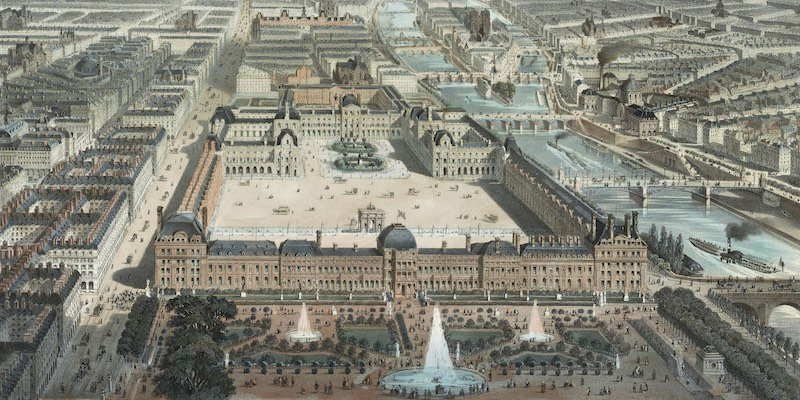 Catherine de' Medici (1519-1589), queen of Henry II and mother to kings Francis II, Charles IX and Henry III, moved out of the Louvre following her husband's death and began building a palace and gardens next door. The wide, narrow palais faced the Louvre and backed onto the then-new Jardin des Tuileries. Eventually, the palace would be the final residence of the doomed Louis XVI and Marie Antoinette as well as the residence of France's two emperors Napoleon and Napoleon III. 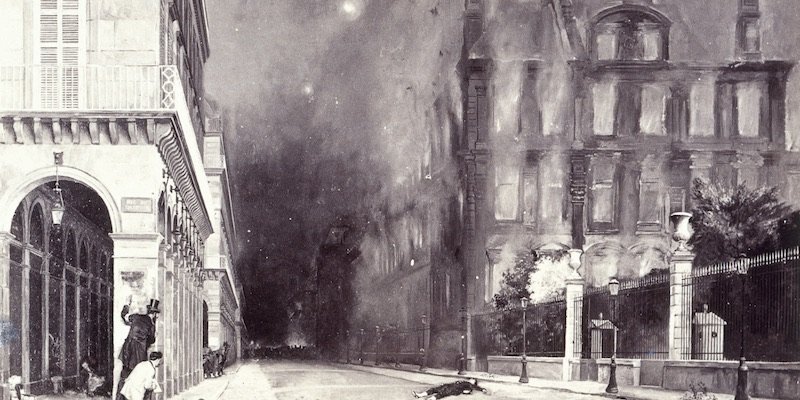 As a sort of royal red flag the Tuileries became a symbol of monarchical oppression, a concept that didn't sit well with the revolutionary Communards. So, it's no surprise that it, too, was torched in May of 1871. The fire lasted forty-eight hours and thoroughly gutted the palace. All that remained was the ceremonial gateway to the palace, the Arc de Triomphe du Carrousel.

The Hotel de Ville would be rebuilt to its original splendor, but the Palais des Tuileries was left in ruins until it was razed in 1883. Some of the stone pieces from its courtyard can be seen today in the gardens at Trocadero. 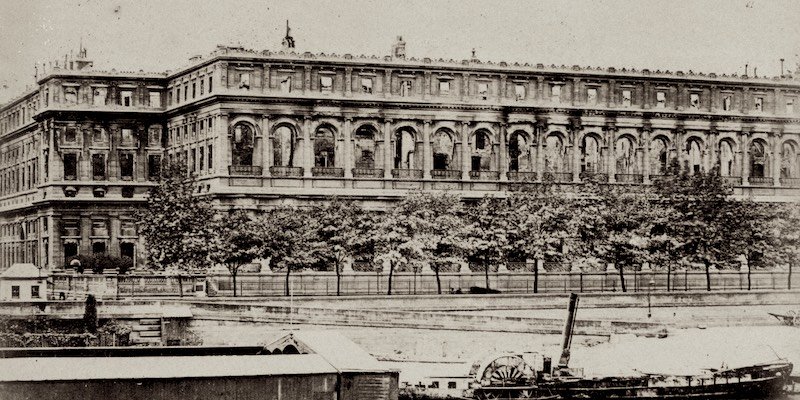 Before it was a museum it was a train station. And before it was a train station there was a imposing palais on the site. Like so much about Paris, this project on Quai d'Orsay was started by Napoleon. And, like so many projects, it wasn't completed by him. But, the grand government administrative building known as Palais d'Orsay was finished in about 1840, when the French Conseil d'État (Council of State) moved its offices here. The building was celebrated for frescoes on the main staircase painted by artist Théodore Chassériau, fragments of which are today preserved at the Louvre.

As a government office building Palais d'Orsay became a target for the arsonist Commune mob and it, too, was gutted by fire during Bloody Week. Fortunately, when Theirs moved the government to Versailles the Conseil d'État had gone with him, along with all the documents. The shell of the building sat vacant for more than thirty years until it was chosen as the site for a new gare to serve the visitors who would be arriving for the 1900 Paris Exposition Universelle.

The Perilous History Of Musée d'Orsay 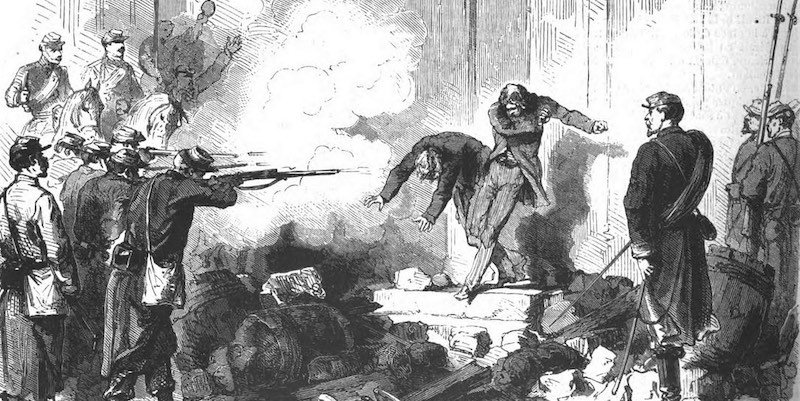 As the Versaillais troops advanced through Paris the Communards erected more and more barricades in the streets. And, when the national army captured the revolutionaries, improvised war trials were held, where thousands of Parisians were judged, condemned, and immediately shot. There were dozens of sites where barricades were erected and dozens of sites of mass execution. On the Left Bank, for one example, there were sites along Rue Saint-Jacques. 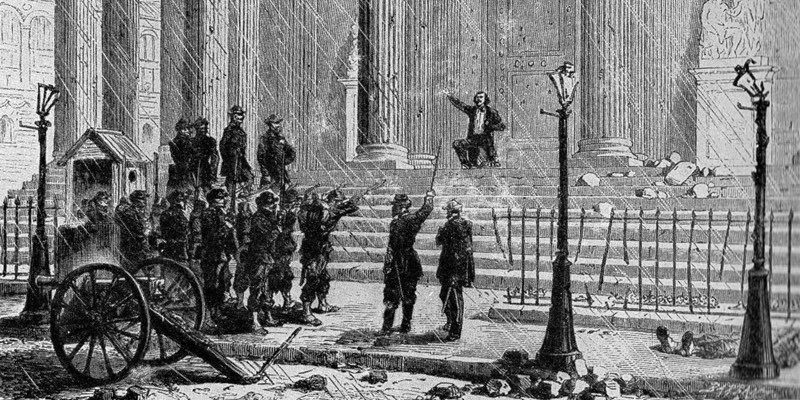 Execution on the steps of the Pantheon, May 1871

Rue Saint-Jacques is one of the oldest (and longest) streets in Paris. It was the Roman's cardo maximus, that is, the primary road through the settlement and the basis for the grid layout of the rest of the city. On May 24, 1871 a number of Communards were executed in the apse of Église Saint-Sevérin at 10 Rue Saint-Jacques. Further up the hill, at 50 Rue Saint-Jacques (today the entrance to one of the universities of the Sorbonne) barricades were created in an attempt to protect the Pantheon from the Versaillais. (That attempt was unsuccessful and there were executions on the very steps of the Pantheon.) Further along, at number 195 (Institut Océanographique de Paris) troops were able to bypass another barricade and kill all of its defenders.

On Rue d'Haxo in the 20th Arrondissement there was a sort of retaliatory episode where, on May 26, fifty-two people, including eleven priests, were shot by the Communards. And so it went for those seven terrible days. 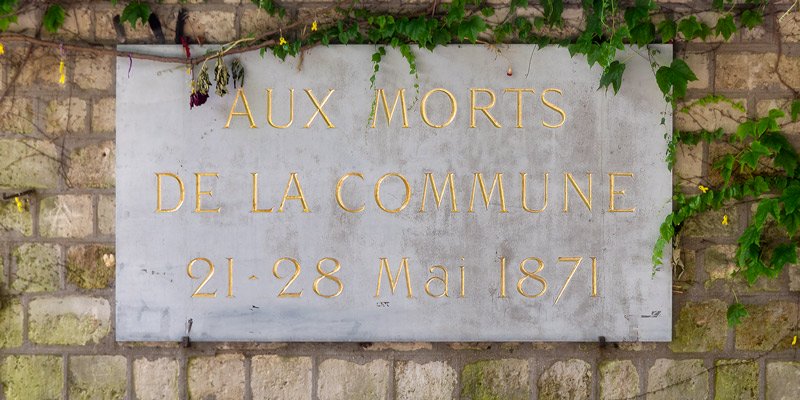 The human toll of La Semaine Sanglante was horrendous. Estimates vary, even among historians of the period, but it seems that between 3,000 and 5,000 Fédéré troops died in the fighting and around 20,000 Communards were massacred.

Our last virtual visit to these bloody sites is in the 20th Arrondissement, at Père Lachaise Cemetery. On May 27, when the end of the uprising was near, a battle, fought among the gravestones, between Versaillais troops and Communards armed mainly with knives, resulted in 147 Fédérés shot with their backs to the wall that now bears their name, Mur des Fédérés.

What We Learned At Père Lachaise Cemetery 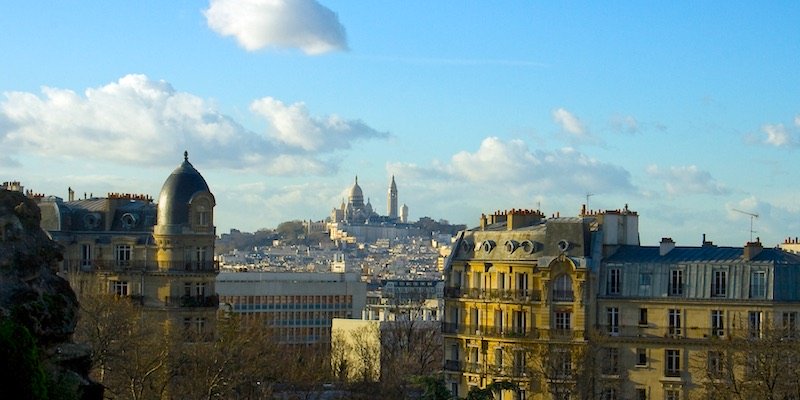 Sacré Coeur as seen from Buttes-Chaumont, photo by Mark Craft

It's interesting, ironic, and still controversial that the very place where the Paris Commune started, on the hill of Montmartre, would become the site of the city's most visible church. In October 1872, just one year after the Paris Commune was savagely put down, the plot of land on which the battle of the cannons was fought was chosen as the site of a new church to "expiate the crimes of the Commune". The National Assembly passed a law allowing the Archbishop of Paris to acquire the land, if necessary by expropriation, a power normally granted only to public authorities.

The church, which would be the large white domes of Sacré Coeur that any current visitor to Paris can't avoid seeing, was begun in 1875 but not completed until 1923. Even today some consider the basilica to be a symbol of the crushing of the Communard revolution in the very heart of the district where the Paris Commune was born. 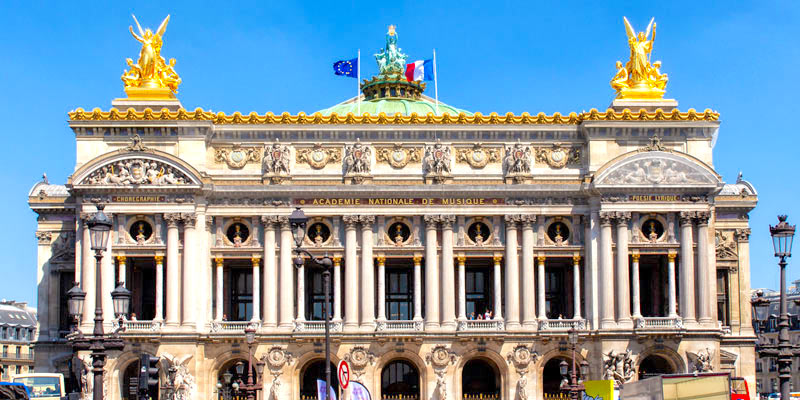 Perhaps the most surprising thing about the disastrous Franco-Prussian War and the devastation of The Commune is that, once over, Paris seemed to simply pick up where it had left off. In the world of painting, Impressionism really hit its stride in the 1870s. A new era of art and design began, one that came to be called the Belle Époque. Palais Garnier, the stunning opera house that had begun in 1861 as part of Baron Haussmann's renovation of Paris, a prime example of Belle Époque sensibility, was completed a few years later in 1875