The Best Ways To Visit Claude Monet's Gardens at Giverny

Claude Monet's gardens are a riot of color, texture, and variety. Just an hour from Paris is the beautiful plot of land where the Impressionist master painted his most famous works. In the midst of the gardens stands the artist's famous Pink House, where he lived for forty years. Monet's house, the gardens, and his studio have been lovingly restored in the quaint Normandy town of Giverny. 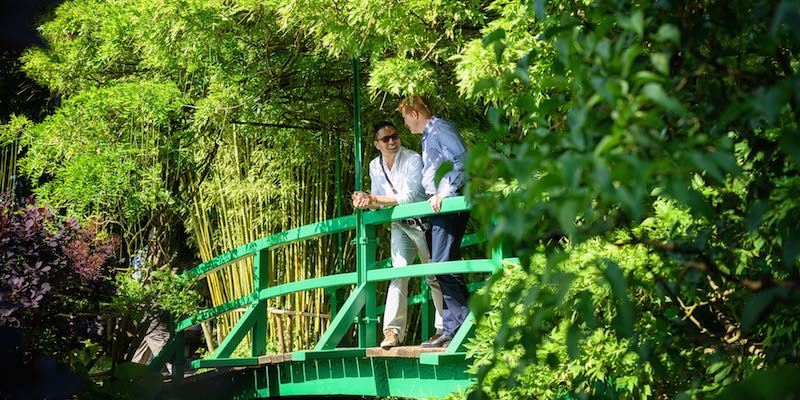 In the gardens of Claude Monet at Giverny

The adventure begins while riding through the Normandy countryside, heading to the charming village of Giverny where an immersion into the life and work of Claude Monet begins. Wandering through the exquisite gardens you can't help but look in awe at the waterlily pond and the Japanese bridge — central themes in many of Impressionist masterpieces. Inside the big pink house you'll love the yellow dining room and the dazzling blue kitchen as well as the other rooms where Monet lived with his family.

There's time to visit the nearby museum dedicated to American Impressionists, and to shop in the gift stores. This small-group tour runs from April to late October, and is also available as a private tour.

This activity is our number-one Monet recommendation. One thing we like about it is that there is no need to worry about how to get to Giverny. You meet up with your driver in the center of Paris and are returned there later the same day. Travel is in a luxury, air-conditioned Mercedes van.

2. Monet's Gardens + Versailles in One Day

The stunning Hall of Mirrors at Versailles

We're huge fans of tours that combine two popular sites in one easy day —in this case, Monet's gardens at Giverny and the chateau and gardens at Versailles. First stop is Giverny to see the gardens that inspired Claude Monet.

Next, stop for lunch at a charming restaurant on the banks of the Epte River before you're driven to the world's most opulent palace ever built, the Chateau de Versailles. You explore French royal history at the opulent Grand Apartments, the dazzling chandelier-lit Hall of Mirrors and the Queen's Apartments. Along the way your expert guide brings the past alive with illuminating details of courtly life in the palace. The tour covers everything, including return transportation from central Paris. Also available as a private tour. 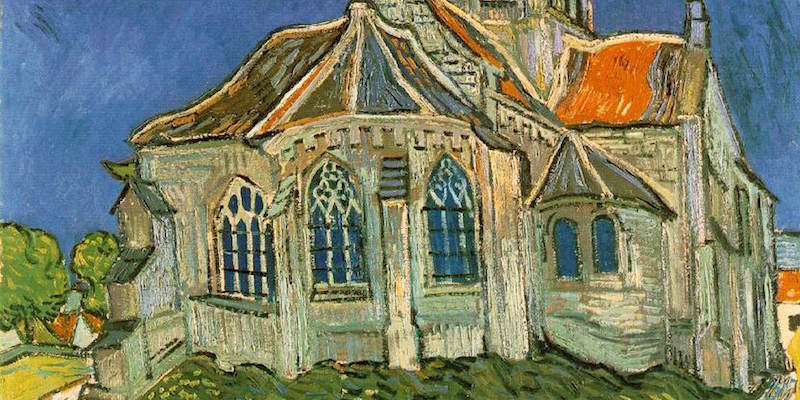 The church at Auvers-sur-Oise, by van Gogh

Giverny (as you know by now) is where Claude Monet lived and worked for the last 43 years of his life. But, not far away is another small village, Auvers-sur-Oise, where artist Vincent Van Gogh worked and died. This two-in-one full-day activity takes you to both artists' milieux on an easy trip from Paris

Your driver picks you up in central Paris and whisks you out of town for a leisurely one-hour drive to Giverny. There, you walk in the footsteps of Impressionist master Claude Monet. You'll have priority-access passes, so you can skip the ticket lines.

After spending some time in the Impressionism Museum at Giverny, it's over to Auvers-sur-Oise for a guided tour of this picturesque village, where Van Gogh spent the final seventy days of his life in 1890. You'll recognize some of the sights, including the local church that he painted. 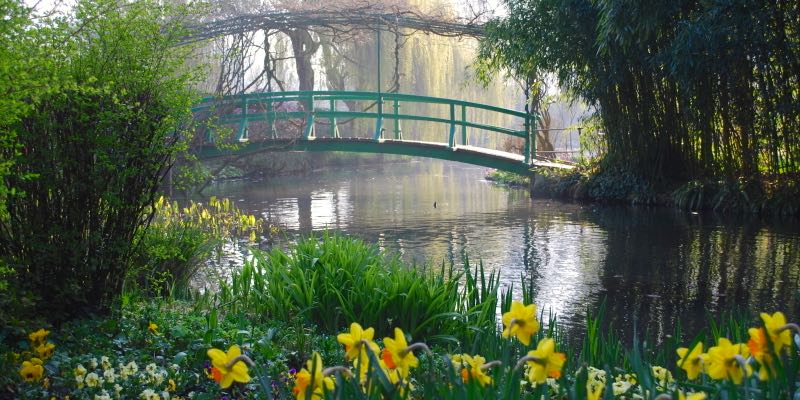 Claude Monet was a founder of Impressionism and, in fact, it was one of his paintings that gave the movement its name. By the end of the 19th century he was the leading Impressionist painter; his work still vibrates today. Looking for a place to raise his family and paint in peace, Monet bought the property at Giverny in 1883. Over the next forty years he designed and built the pond, the Japanese bridge, and the gardens specifically to provide subjects and inspiration for his work. You will be familiar with paintings of the lily pond and the flowers in the gardens.

It was at Giverny that Monet created the place of his dreams where he could paint, garden, and relax in a natural and peaceful environment. He lived in Giverny with his family from 1883 until his death in 1926. Unfortunately, there wasn't a long-term plan to care for the gardens that inspired some of his most-loved paintings. From 1926 until 1977, the estate experienced a slow decline. Luckily for all of us, it's been restored to its original state. 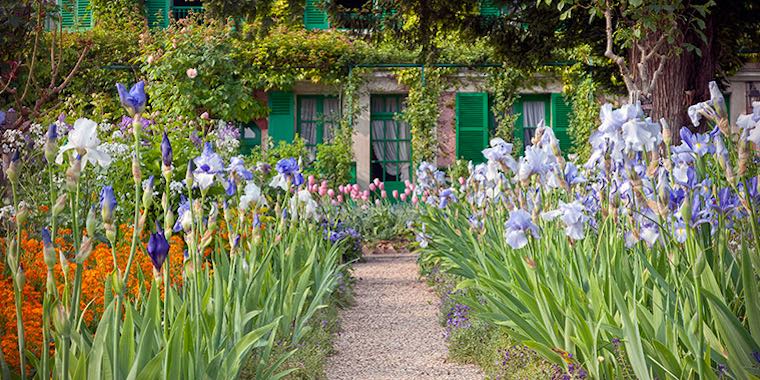 Claude Monet did not like organized gardens, he grouped flowers together by color and left them to grow freely. He loved to mix simple flowers like daisies and poppies with rare varieties. Monet had a real passion for botany and he often exchanged plants with his friends, including artist Gustave Caillebotte and French Prime Minister Georges Clemenceau. He was always on the hunt for rare flowers, which he would purchase at great expense.

The main garden, named Clos Normand, is 2½ acres (just over one hectare) of flowers planted directly in front of the Pink Mansion. A series of decorative arches connect the profusion of sunflowers, dahlias, and nasturtiums.

A decade after his arrival at Giverny, Monet bought the property across the road, which featured a small creek. First he had to get permission from the local prefecture (sort of like a regional administrator) to dig a pond. He then hired local craftsmen to build the Japanese bridge. His neighbors strongly opposed the the pond, believing his odd plants would poison their water supply. The water garden, inspired by the Japanese gardens (which Monet only knew from the Japanese prints he collected), was designed to be used exclusively as a location for him to paint. 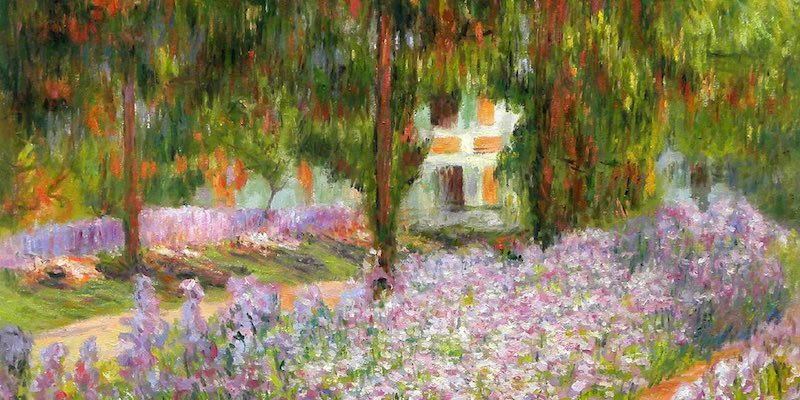 Claude Monet's impression of his garden

The Invention of the Ornamental Garden

Before Monet built his garden at Giverny ornamental gardens were only found in mansions and castles. Gardens of the time were used for practical purposes, to grow fruit and vegetables. Monet was a leader in the 19th century movement to grow a garden for pleasure and inspiration.

The famous green Japanese bridge, covered with wisteria, surrounded by weeping willows and bamboo, overlooks the equally-famous nympheas (water lilies) which bloom all summer long. For more than twenty years, Monet would be inspired by his magical water garden. To get to the Japanese pond, you walk through a short tunnel beneath the roadway that links the Clos Normand gardens to the pond.

Highlights of the Pink House 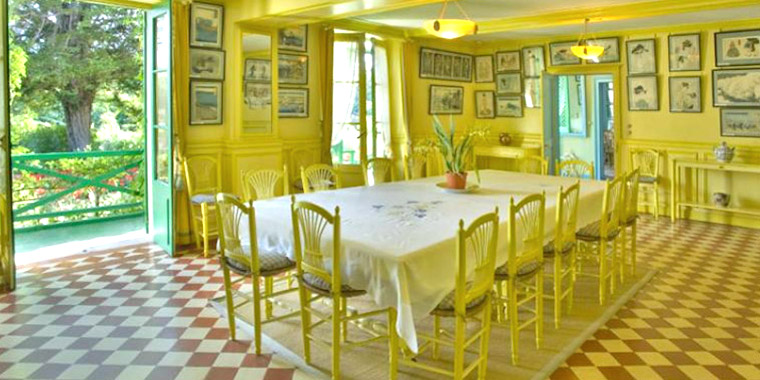 As you can see from his paintings, Claude Monet loved color. At Giverny he brought the colors of his garden into his living space to make his house come alive with bright, vibrant hues. The Pink House was a derelict apple cider press shack when he purchased the property; in fact, Money first called the house simply La Maison du Pressoir. Over the years, he made numerous additions — extra bedrooms, sitting rooms, and two studio spaces.

Always an artistic leader, Claude Monet ignored the dark, heavy Victorian interior fashion of the time in favor of bright colors. The dining room was painted in two tones of saturated yellow to enhance the blue dishes on display in the buffet. Offsetting the intense yellows are vibrant orange and white floor tiles. The walls of the dining room are lined with the Japanese prints that he so adored — Hokusai, Hiroshige, and Utamaro. 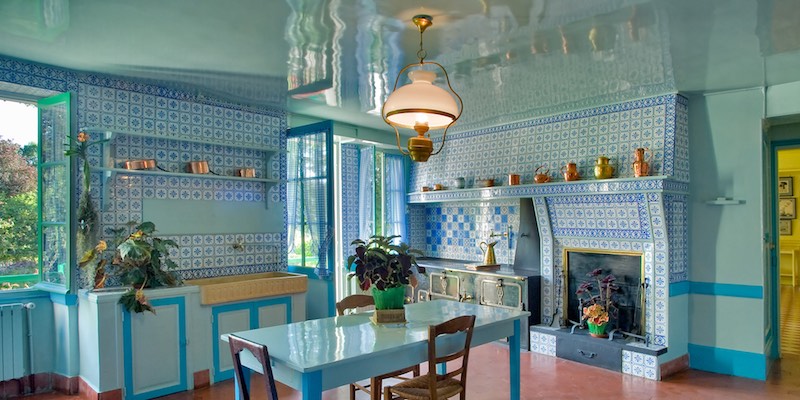 Connected to the yellow dining room is the vibrant blue kitchen. Monet wanted guests to see the proper color harmony from the open door leading from the dining room directly into the kitchen. The walls are covered with blue tiles from nearby Rouen. The ceiling is painted with a shiny, high-gloss paint. A large coal and wood stove burned year round, keeping the unheated kitchen warm and cozy. 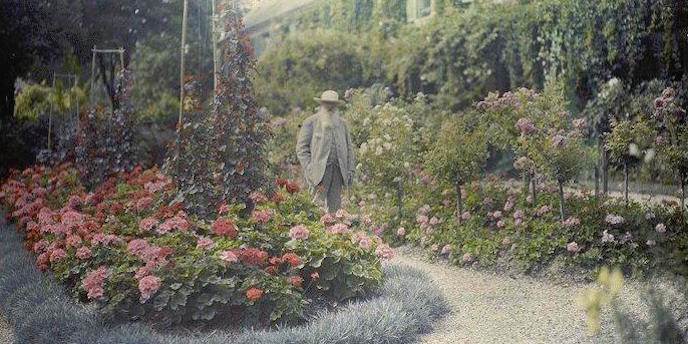 Color-tinted photograph of Monet in his garden, c. 1920

When Monet died in 1926 at the age of 86, he left the Giverny estate to his only living son, Michel Monet. But, not much planning went into maintaining the house or the gardens after Claude's death. Michel Monet didn't live at Giverny and he left it to his step-sister Blanche Hoschede Monet to care for the estate. After her death in 1947, the property fell into disrepair; eventually both the house and the gardens were in shambles.

On February 3, 1966, just days before his 88th birthday, Michel Monet died in a car crash in nearby Vernon. In his will he donated the entire estate to the Academie des Beaux Arts.

It took another decade for the restoration to began in 1977 after which it took ten years of hard work to get the gardens and the pink house back into the condition that Claude Monet had left them. The Japanese pond had to be re-dug; care was given to source the same flowers that Monet had originally planted. Giverny was finally opened to the public in September, 1980. 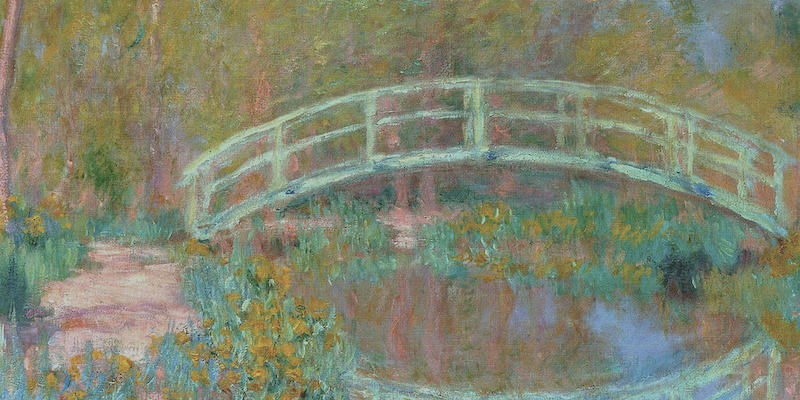 Even art lovers may not know that Monet suffered from cataracts for the last twenty-five years of his life. As his eyesight declined, his paintings changed from the bright, fresh color palette to dark browns, greens and reds. It's fascinating to visit Musée Marmottan in Paris to see how his paintings of the Japanese bridge changed over the years.

Although he had two surgeries to correct the cataracts, some art experts believe that he still suffered from color discrimination and his vision would have been very blurred. However, his cataracts did not prevent him from painting some of his best work, most notably the waterlily series. 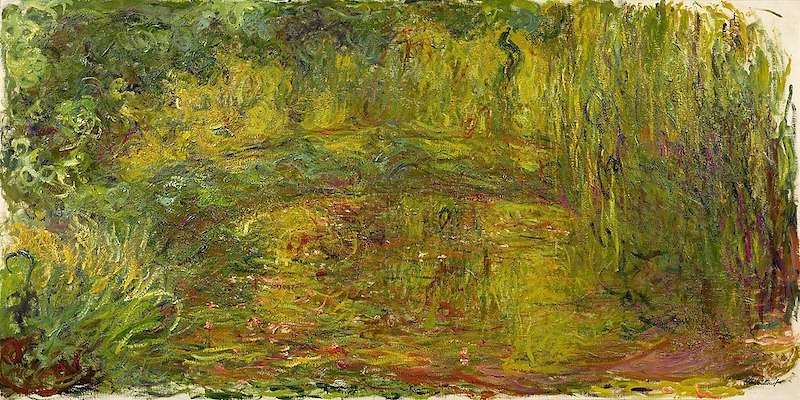 The Best Time to Visit Giverny

The gardens are open from late March to lat October. Flowers will be blossoming the entire season. So, really, the best time to visit is when you can get there!

When you're at Giverny, explore the Musée des Impressionnismes that houses numerous works by American painters who met Claude Monet and drew inspiration from his techniques. It's right outside the grounds of the Monet estate and many of the guided tours allow you time to visit it. 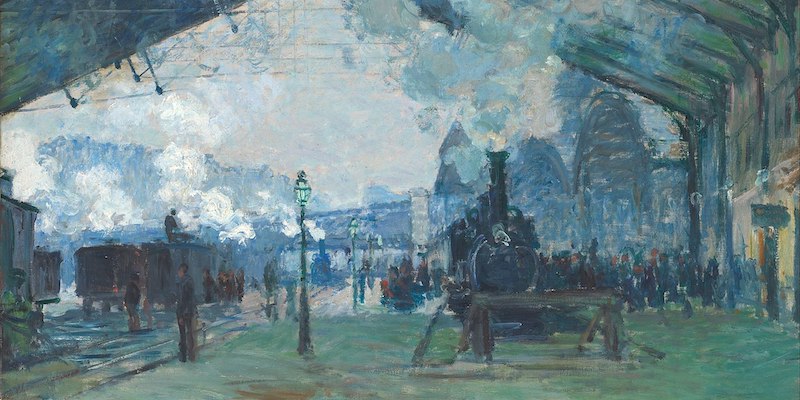 How to Get to Giverny on your Own Steam

If you're a self starter, make your way to the Gare Saint-Lazare. The station is virtually unchanged since Monet famously painted it in 1876. Head to the platforms marked SNCF – Grandes Lignes. It's about a 45-minute ride to the town of Vernon.

At the Vernon train station, taxis will be available to take you to Giverny. A one way taxi fare is about 20€. There's also a shuttle from the train station that runs during spring and summer. The round trip shuttle is about 10€. Or, you could walk from Vernon to Giverny; it takes about an hour. Just follow the Voie André Touflet, which parallels the main route, Route de Giverny. It's a romantic, flat pedestrian and cycling trail that follows the tracks of an abandoned railroad.

This was our favorite tour and highly recommended for anyone visiting France. We were picked up and dropped off at our hotel and It was a comfortable drive of about an hour and a quarter. The gardens were extensive and exquisite, and Monet's home was charming and filled with his art. It was a breathtaking experience!"
– 5-Star Review

Where to View Monet's Paintings in Paris 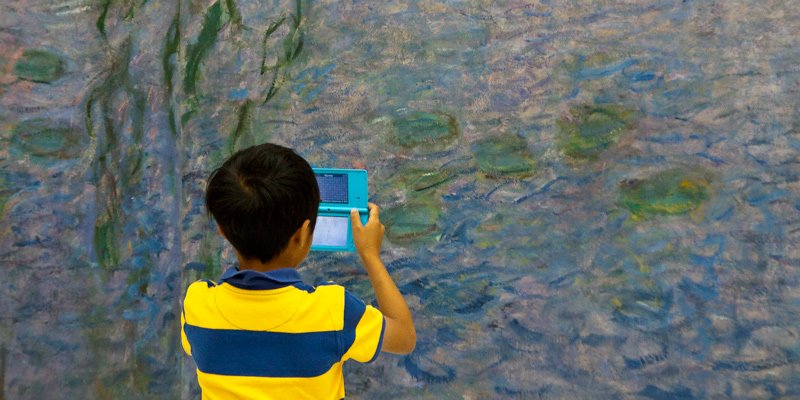 After your trip to Giverny, it will be a great thrill to see Monet's work in museums in Paris. Pay a visit to Musée Marmottan Monet in the 16th Arrondissement to see the collection of paintings that Michel Monet bequeathed to the museum. At Musée d l'Orangerie you can see the massive, curved paintings of the water lilies that Monet did in his later years. And, of course, at d'Orsay you can see Monet amongst all the other great Impressionists.