The Perilous History & Near Demise Of The Musée d'Orsay

Today the Musée d'Orsay, sitting proudly on the left bank of the Seine, looks solid, secure, permanent. But that hasn't always been the case. In the 200-plus years since the first construction started here on the Quai d'Orsay there have been ups and downs, floods and fires, even threats of demolition. The story starts, as many Paris stories do, with Napoleon… 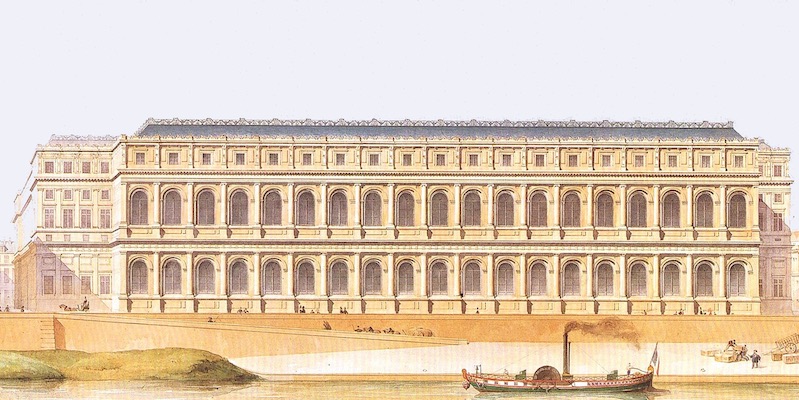 Never a man not to leave his imprint on Paris, one of Napoleon's Paris city improvement projects was the construction of a grand government administrative building along Quai d'Orsay, on the site of the current museum. As grand as it was, the new building was secondary in grandeur to Bonaparte's other projects — the Arc de Triomphe, Rue de Rivoli, and improvements to Place Vendôme and Place de la Concorde, to name just a few.

Palais d'Orsay, begun in 1810, wasn't completed by Napoleon's downfall in 1814. In fact, it wasn't completely finished until about 1840, when the French Conseil d'État (Council of State) moved its offices there. The building was known for the frescoes painted by artist Théodore Chassériau on the main staircase, fragments of which are today preserved at the Louvre. 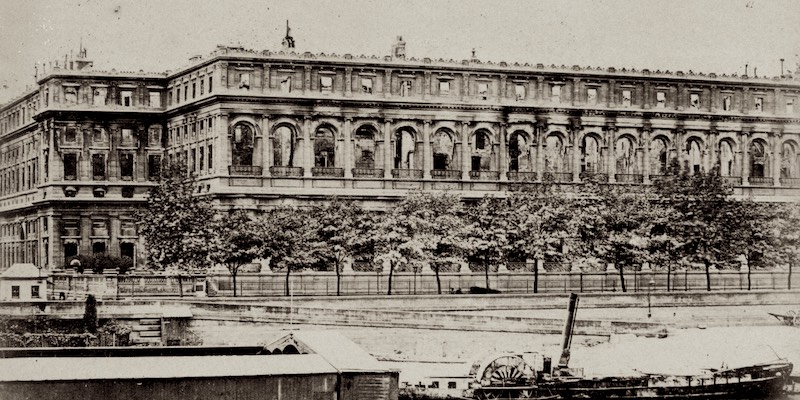 Palais d'Orsay after the Commune-inspired fire, 1871

Napoleon's nephew and eventual successor as emperor (reigned 1852 to 1870) came to grief in the ill-advised (we're trying to avoid saying stupide) Franco-Prussian War of 1870, which resulted in his abdication and flight to England. Following a humiliating defeat and occupation by Prussian troops, a sort of socialist republic was established in the city that came to be called the Paris Commune.

The Paris Commune lasted only two months, but the period was marked by chaos and destruction. Under the Communards the government offices were moved out of the Palais d'Orsay to Versailles, just in time for a Commune-crazy mob to set fire to the palace on May 23, 1871, a fate that also befell the Hotel de Ville and the Tuileries Palace. 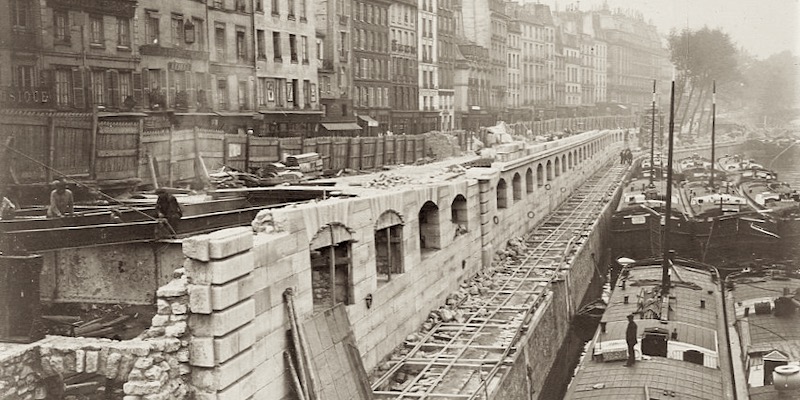 Construction of the tracks to Gare d'Orsay along the Left Bank, 1899

Although it didn't take long for urban life to return to normal and for Paris to reclaim the title of Capital of the World, it took the better part of three decades for a use to be found for the now-abandoned site on the Quai d'Orsay. The catalyst for action was the 1900 Paris Exposition Universelle, which would welcome tens of thousands of exhibitors and millions of visitors, most of them arriving by train.

The Paris train stations were located far from the center of the city and from the site of the exposition on the Champs de Mars. (This was in the days before city-wide mass transportation.) So, a new gare was to be built on the site of the derelict palais; the tracks to serve it would be extended from the overcrowded and distant Gare d'Austerlitz (located on the Seine at the border of the 5th and 13th Arrondissements).

The new lines tunneled beneath Austerlitz and were dug underground along the banks of the Seine. To avoid smoke and steam filling the tunnels, and to avoid marring the beautiful interior of the new station, only electric locomotives were used. Steam engines pulled the trains into Gare d'Austerlitz where the cars were then hitched to the new electric locomotives for the final leg to the new train station. 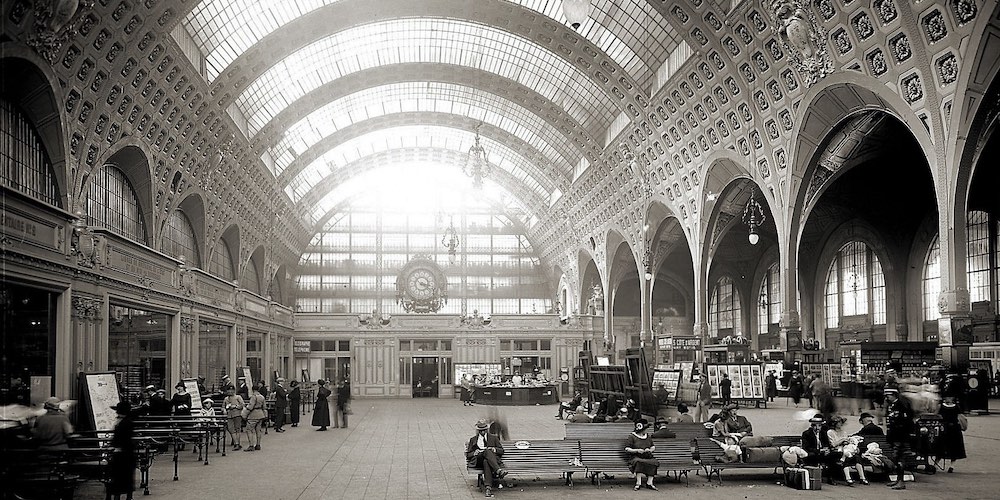 The design mandate for the new station was to fit in with the surrounding architecture of the 7th Arrondissement while providing the comforts expected of a modern train station. Architect Victor Laloux had just completed a modern-yet-classic train station in the city of Tours, and, on the strength of that work, he was selected to design the new station that would arise on Quai d'Orsay. (Thirty years later he would co-design the current American Embassy in Paris.)

The station was a glorious triumph, with high, vaulted ceilings; huge archways; tall windows, and decorated with metallic rosettes. A luxury hotel with a sumptous dining room welcomed foreign dignitaries and celebrities. Appropriately, the station was inaugurated on Bastille Day — July 14, 1900. 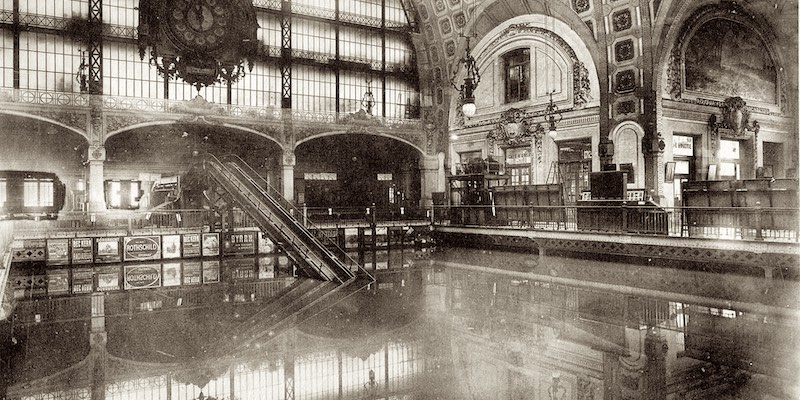 Who would have expected that the new Gare d'Orsay — or, more accurately, the tunnel leading to it from Gare d'Austerlitz — would be the cause of flooding in the Saint Germain district? Eugène Belgrand, that's who.

Belgrand was a 19th-century engineer in charge of the new water and sewer system created for Paris during the massive renovation overseen by Baron Haussmann that began in 1853. The river Seine overflows its banks on a regular basis. So, to prevent the worst of the flooding, Belgrand designated a minium height above sea level for any construction along the banks of the Seine. But, officials in 1899 allowed the flood wall along the Austerlitz-Orsay train track tunnel to be built one and a half metres (five feet) below Belgrand's stipulated level.

During the infamous 1910 Paris flood, the train line became the path by which the river inundated a large section of Saint Germain, with water also covering the station's tracks up to the level of the main floor. Belgrand's sewers, designed to work with higher-level flood walls were unable to cope with the enormous volume of water. 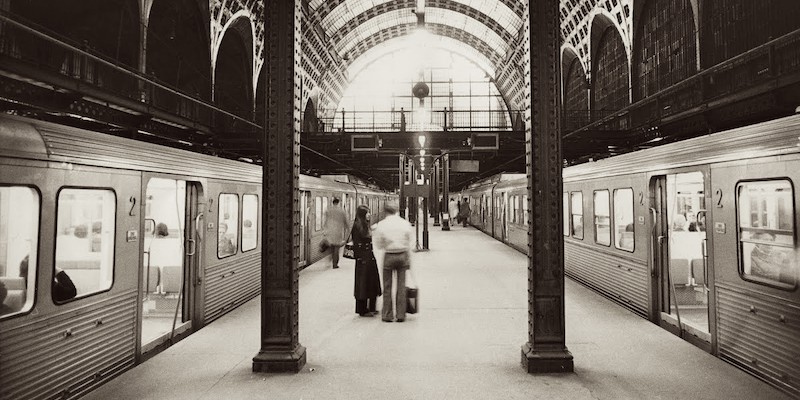 After drying out, Gare d'Orsay experienced its traffic peak during 1920s and 1930s. But this popularity was not to last. As trains increased in overall length, the fixed 300-metre-long tracks inside the gare were unable to accommodate them. By 1939 intercity trains no longer pulled into d'Orsay and it became only an RER station and a storage garage for urban trains. 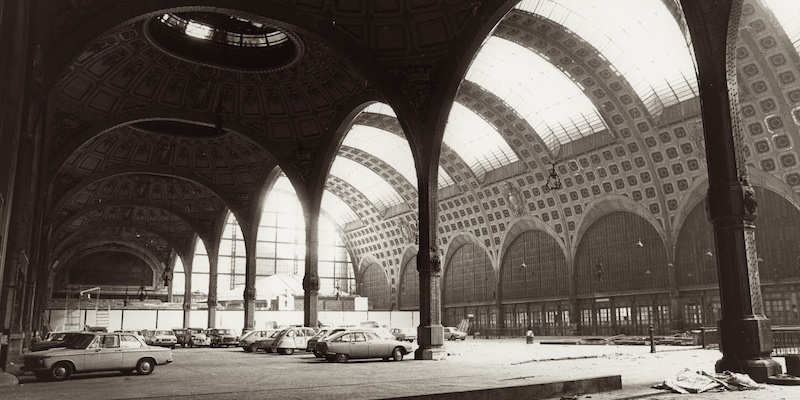 For the next four decades Gare d'Orsay was nobody's child. Unloved. An empty shell on the Seine. Sure, it was put to use — as a parcel sorting center in World War II, as the processing centre for returning prisioners of war in 1945, as a location for Orson Welles' 1962 film of Kafka's The Trial, even as a parking garage — but no-one embraced it. And no-one seemed to know what to do with it. 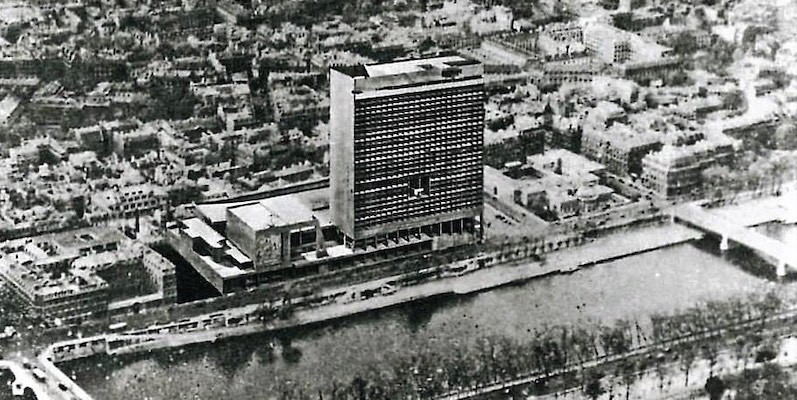 As we all know, Gare d'Orsay definitely was not demolished in 1970, although a demolition permit was granted that year to make way for the construction of a modern hotel and convention center. During this era even architect Le Corbusier got into the act, proposing the inappropriate modernistic nightmare shown in the illustration above. (You'll know from elsewhere how little we like Le Corbusier's various ideas for Paris. His Orsay proposal only strengthens our conviction!)

Luckily, into this period of crisis and uncertainly stepped French government minister Albin Chalandon (or was it Jacques Duhamel, Minister for Cultural Affairs? reports vary) who reversed the building and demolition permits. By this time the idea of transforming Orsay into a museum had been floated by various planners and officials; in 1973, the building was listed as an Historic Monument, scuttling any future demolition plans. Hurray! 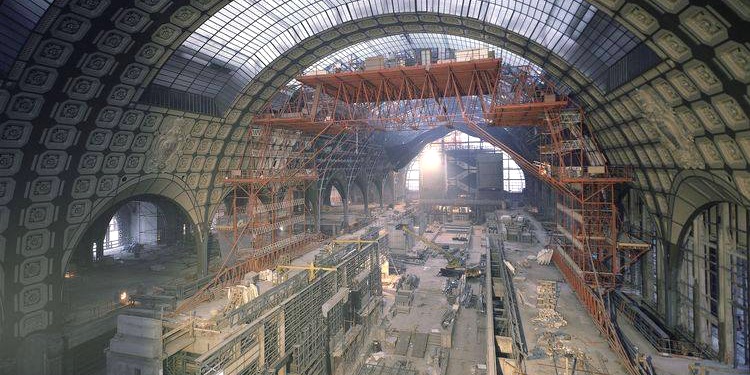 On October 20, 1977, during the term of President Valéry Giscard d'Estaing, final approval was given to transform the gare into a museum that would house artworks from the period between the classicism of the Louvre and the modern art of Centre Pompidou. In other words, the artistic period between 1848 and 1914, with, as it would turn out, an emphasis on Impressionism.

Automobiles, rail cars, postal supplies, and any odd movie props were cleared out of the station and a crew of over one thousand tradespeople set to work restoring the building and adding over 200,000 square feet of new floorspace across four levels. 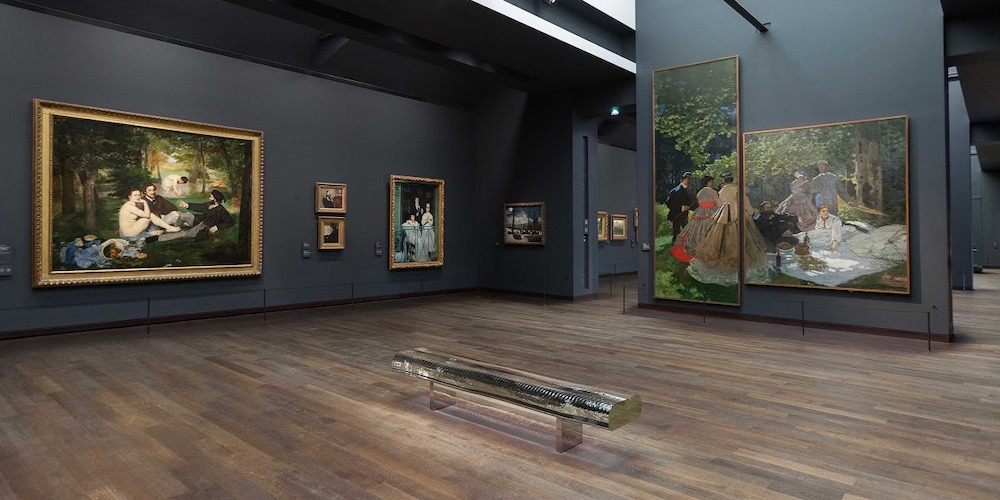 It was, indeed, a perilous journey for the d'Orsay. But, Beauty and Art triumphed over Parking in the end, and the brand new Musée d'Orsay was opened by dignitaries (including past, present, and future French presidents François Mitterrand, Jacques Chirac, and Valéry Giscard d'Estaing) on December 1, 1986, when the Impressionist gallery looked like it did in the photo above. 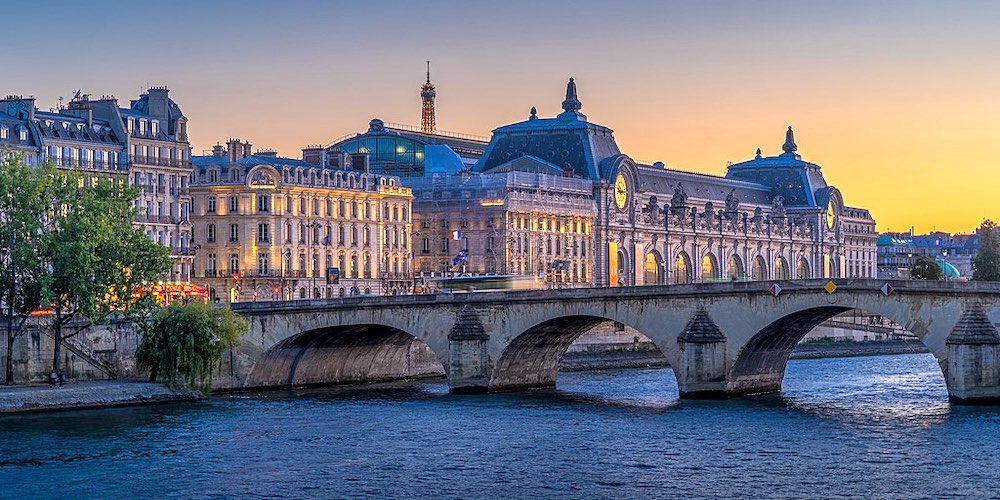 Musée d'Orsay has amassed a vast art collection, far more pieces than can be exhibited in its current space. So, for the first time in its history, the entire building is being transformed to public space to display more art. A renovation now underway is converting all office space into art space. The south wing of the building, 13,000 square feet that has been used for administration, will now house expanded Impressionist and Post-Impressionist galleries. Elsewhere, on the fourth floor, a new art education center is being added.

The project is called Orsay Grand Ouvert (Orsay Wide Open) and is being funded largely by a gift of €20 million from an anonymous (American) donor.