Jardin des Tuileries, Paris – The Most Beautiful Park In The City

Jardin des Tuileries in Paris, the splendid public garden between the Louvre and Place de la Concorde takes center stage as the place to meet, play, and relax. Today, as you stroll through the sun-dappled pathways, it's hard to imagine that this was ground zero for the French Revolution as well as the official residence of French kings and queens.

Began in 1564 by Catherine de Medici (who, by the way, was the mother of three French kings) the Tuileries Garden opened to the public in 1667 and takes the title as the first garden in Paris open to everyone. But, when Catherine arrived, the area was nothing more than a marsh; it's where workshops, called tuileries, churned out tiles for the rooftops of Paris. Let's take a look back at the tumultuous past of the Jardin des Tuileries Paris and revel in how today it is a place of peace and calm in the heart of the city.

In & Around the Jardin des Tuileries

Jardin des Tuileries, one of the largest parks in Paris, stretches from the Louvre to Place de la Concorde, with a network of paths crisscrossing the 28-hectare garden. Sculptures by famous French sculptors dot the landscape; in fact, there are twenty works by Aristide Maillol alone (found in the Carrousel Garden).

Stand in the center of the garden, eyes turned north towards Rue de Rivoli. Then look right towards the Louvre (you have to imagine you can see the ghost of the Tuileries palace that once closed off the western end of the Louvre complex). Then turn to your left, west, for views of Place de la Concorde and beyond it Champs-Elysées, Arc de Triomphe, and way beyond in the distance, the Grande Arche de la Défense. Turn around and behind you, across the Seine, is the Musee d'Orsay and a little bit to the right… is that the Eiffel Tower? 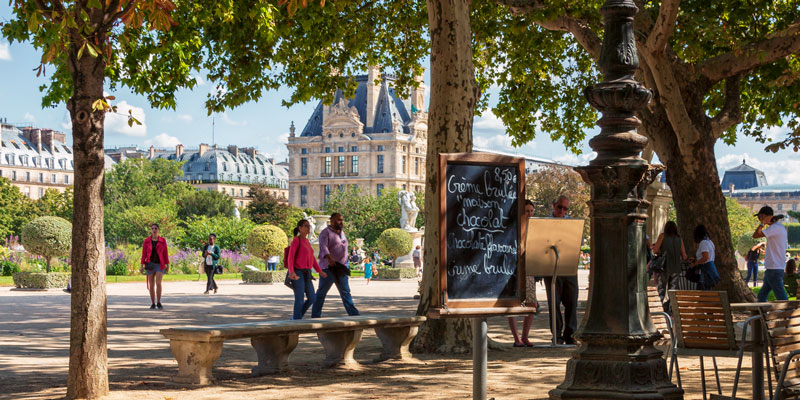 This is a place to lounge. The famous green chairs surrounding the ponds and fountains invite relaxation. Hungry? Take a break in one of the open-air cafes. Children will enjoy the playgrounds, Ferris wheel (in season), and the temporary fairgrounds set up during July and August.

Within the gardens, up against Place de la Concorde, are two museums. Musée de l'Orangerie holds permanent collections of Impressionist artists (including Monet's massive water lilies paintings) and contemporary art exhibits. Jeu de Paume is dedicated to photography. With all these attractions, it's no wonder the Tuileries Garden is one of the most popular public parks in Paris. 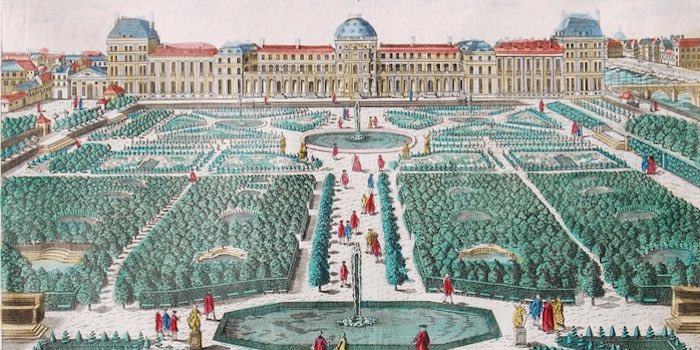 1559. Henry II dies unexpectedly after a jousting match at the age of forty. His widow, Catherine de Medici, leaves the stuffy Chateau des Tournelles (where La Tour d'Argent restaurant now stands) for the Louvre Palace. She decides to build a separate palace for herself and her surviving ten children. Among them is her son, the new king, François II. The Tuileries Palace and its gardens are going to be planned and built to create memories of her hometown, Florence.

Naturally, Catherine commissions a Florentine landscape architect to create an Italian Renaissance garden reminiscent of her childhood. The gardens are divided into six rectangular sections separated by alleys; each is planted with lawns, flower beds, and quinconces, clusters of five trees. The gardens also have a practical side, providing herbs and vegetables for the palace kitchens.

Once completed, the Jardin des Tuileries is the talk of the town. Catherine uses the beautiful gardens for lavish royal events welcoming guests like Queen Elizabeth I of England and to host the marriage of her daughter, Marguerite de Valois, to the future Henry IV.

That's Not the End of the Story… 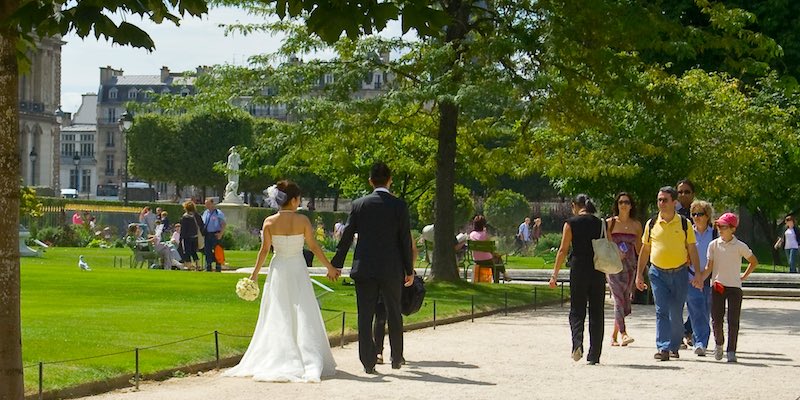 1588. In a battle between Catholics and Protestants, Henry III flees Paris. The gardens fall into disrepair. A decade later, Henry IV restores them and builds Jardin Neuf (new garden) with a large fountain in the center. Like many French rulers, Henry only uses the Tuileries Palace for entertainment, never as a residence.

1610. Louis XIII, age nine becomes, king and the new owner of the Tuileries Garden. It becomes his personal playground for hunting, horse riding, and a private zoo. When absent from court and Paris, Louis allows Jardin des Tuileries to be used by the nobility.

1643. Enter the Sun King. When Louis XIV comes to power he imposes his sense of order on the Jardin des Tuileries. After decades of muddling around, the Tuileries Palace is finally finished. To celebrate the birth of his first child, a pageant is held in the Jardin Neuf, thereafter known as the Place du Carrousel. 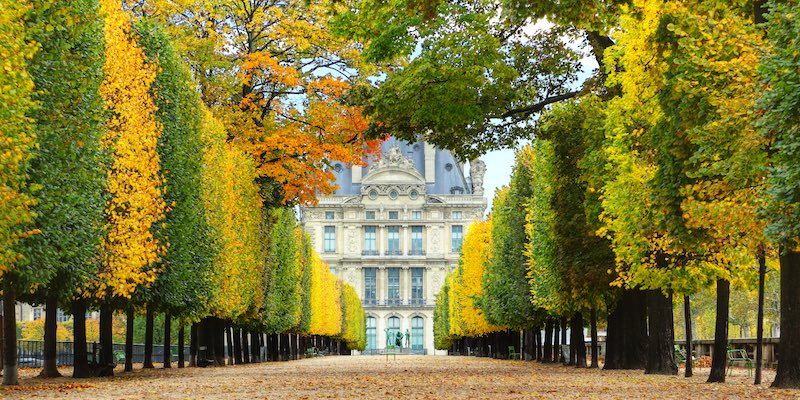 Vaux-le-Vicomte – The Tragic Inspiration for Versailles…

1664. Landscape architect André Le Nôtre is commissioned to redesign the entire garden. Le Nôtre comes from a long line of court gardeners — his grandfather was gardener to Catherine De Medici. He sets upon transforming the Tuileries into a formal French garden based on symmetry and order; a style he invented at Vaux-le-Vicomte and perfected at Versailles.

Le Nôtre's plans are grand and complicated — the street dividing palace from garden is replaced with a terrace and three fountains. In front of the first fountain he adds a grand allée, along with two other pathways, each lined with chestnut trees.

Le Nôtre wants the gardens to be seen from above and creates terraces to frame the gardens. Next to Place de la Concorde two ramps in a horseshoe shape are built with two additional terraces to overlook the fountain. It takes six years and hundreds of masons, gardeners and workers to transform the gardens. By then, the Sun King is impatient and fed up with Parisians. Annoyed, he leaves Paris and officially moves the royal residence to Chateau de Versailles. 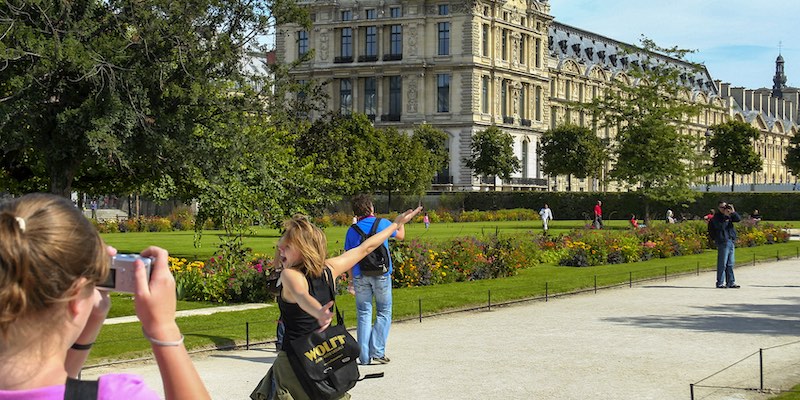 1667. Charles Perrault, author of Sleeping Beauty requests the gardens be open to the public. Jardin des Tuileries is the first royal garden in Paris to be so open. You can find his statue in the heart of the park. At the foot of the statue, look for Puss In Boots, a character Perrault introduced in a book of short stories.

1715. The Tuileries again becomes the royal residence. At five years old, Louis XV moves to the Tuileries from Versailles. During his sixty years of rule, the main promenade through the Tuileries gardens becomes a broad avenue on the far end of the park, reaching all the way to the top of the hill. Thus, the Champs Élysées was born.

1789. After the storming of the Bastille, Louis XVI and his wife, Marie Antoinette move the family from Versailles to the Tuileries, hoping it will bring them closer to the people. The plan backfires. After the royal family's failed escape attempt, they are put under house arrest and forced to remain in the Tuileries. 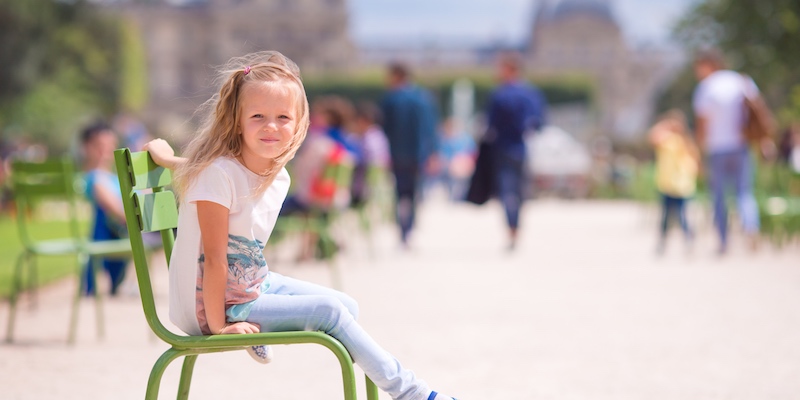 1792. In August, the Tuileries Palace is attacked. Vive la Revolution ! The monarchy is abolished. The newly invented guillotine is set up next door in the Place de Concorde and the killing machine starts.

1872. During the Paris Commune, twelve men set the Tuileries Palace on fire. It burns for two days. The ruins stand for eleven years, until 1882, when the French National Assembly vote the palace should be demolished.