The Pantheon In Paris And Its Reversible, Turbulent History

Situated on the highest point of the Left Bank, the dome of the Panthéon is visible from much of Paris and another city landmark with a fascinating history. It begins in the mid-1740s, when Louis XV vowed that should he recover from a serious illness, he would build a new church to replace the derelict abbey of Sainte-Genevieve.

Louis XV, by the way, was the last French king to rule until his natural death. He's also credited with ruining the monarchy, bankrupting France, and creating the discontent that lead to the French Revolution, fifteen years after his death. But enough about him, back to the Pantheon…

The Hectic History of the Pantheon 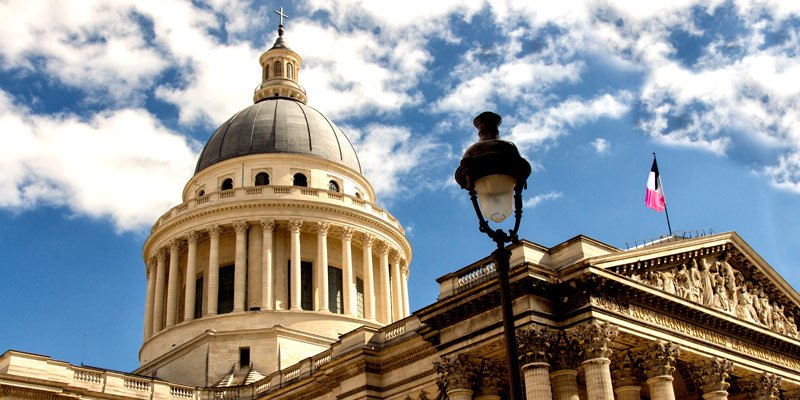 The dome of the Pantheon, photo by Mark Craft

Louis' plan called for a vast church, so big that Soufflot, the architect, was ridiculed by all of Paris. And this was only the beginning of the Pantheon's rocky road to completion. Construction started in 1758, but was suspended due to lack of funds and bad planning. The lack of funds was due to Louis' overspending on… well, pretty much everything. The bad planning was a design that failed to take into account soil conditions that would result in an unstable foundation. The project lagged and wasn't completed for thirty years or so. In other words, just in time for the French Revolution.

Although conceived as a church to honor Sainte Genevieve, in 1791, as part of the ongoing French Revolution, the Constituent Assembly declared that the newly-completed building would now become the Temple of the Nation — a shrine to "the heroes of France". It would "receive the bodies of great men who died in the period of French liberty." Thus, it became the Panthéon — the place for all the gods — in this case a burial place for the great men of France. (It was all men, at first.)

The dome of the Pantheon, photo Wikimedia Commons

A mere ten years later, under Napoleon (who is part of pretty much any Paris story), the Pantheon again reverted to a church dedicated to Genevieve. Then it re-reverted to a necropolis (1830) under the restored monarchy of Louis-Philippe, a church once again (1852) under Napoleon III, the headquarters of the Paris Commune in 1871, and finally a national historic temple to receive the ashes of Victor Hugo in 1885.

Today, there are seventy-six great men and two women interred in the crypt of the Panthéon, including authors Emile Zola, Victor Hugo, and Alexandre Dumas; scientists Pierre and Marie Curie; and WWII resistance leader Jean Moulin. The latest honoré was French author Maurice Genevoix (1890-1980), whose remains were transferred to the Panthéon in November 2020.

The Architecture of the Panthéon 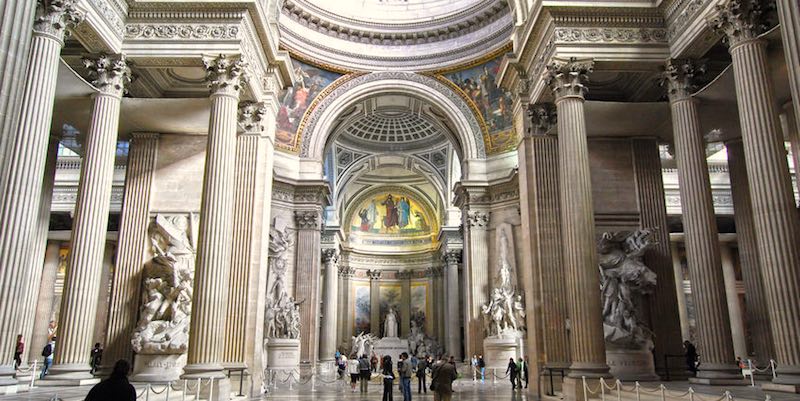 The Corinthian columns of the Pantheon

The building is laid out in the form of a massive Greek cross, featuring Corinthian columns, with massive domes held up by hidden flying buttresses.

The nave of the building is divided from the aisles by a row of the columns, which support a frieze and cornice, also inspired by Greek architecture. In the upper section is a fresco depicting Sainte Genevieve, commissioned by Napoleon Bonaparte himself in 1811. 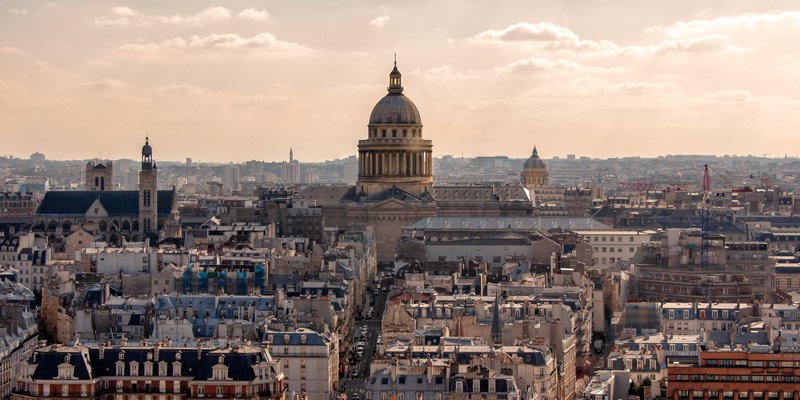 The Pantheon, seen from the bell towers of Notre Dame, photo by Mark Craft

The Pantheon is the visual and spiritual center of the 5th Arrondissement, the Latin Quarter, and is an easy walk from anywhere in that quartier. We like to approach it from the east gate of the Luxembourg Gardens. From there you get a real sense that it is, in fact, on a hill, and the highest point of the arrondissement.

The nearest Metro station is Cardinal Lemoine on line 10, which brings you up to the east of the Pantheon. RER B has a station called Luxembourg, which is at the east gate of the park. By the way, just behind the Pantheon is the church of Saint-Etienne-du-Mort on Rue Montagne Sainte-Geneviève. Here you'll find the stairs where Owen Wilson goes nightly to catch his magic car ride to the past in Woody Allen's Midnight in Paris.