Napoleon had two triumphal arches planned for Paris. One, the Arc de Triomphe de l'Étoile, is a world-famous monument and one of the icons of Paris. The other, the Arc de Triomphe du Carrousel, its little brother, too often goes relatively unnoticed by visitors, possibly because it gets lost in the splendor of the Louvre and the Jardin des Tuileries, where it is located.

Although the story of Arc de Triomphe du Carrousel starts with Napoleon (doesn't almost everything in modern Paris?), the history of the Place du Carrousel goes back centuries earlier. Bonaparte was never one to be modest about his military achievements, so he decided he would flank both ends of the Axe Historique with monuments to his victories.

Arc de Triomphe du Carrousel, with the Venetian horses on the top

The Axe Historique is an imaginary historical axis of Paris that starts in the center of the Louvre, runs west through the Tuileries Gardens, then continue straight through Place de la Concorde, along the middle of Avenue des Champs-Elysées, and into the center of the Place de l'Étoile (today also known as Place Charles de Gaulle), directly beneath the majestic Arc de Triomphe.

Napoleon didn't originate the idea of an Axe Historique — that was imagined by the architects and urban planners working under the various Louis — but Bonaparte did specify that his two arches be built straddling this line. (In modern times, this historical axis has been extended beyond the Place de l'Étoile to continue down Avenue de la Grand Armée and onward, across the Seine, and through the middle of that grandest of arches, the, um…Grande Arche de la Défense.)

A Monument to Napoleon's Victories 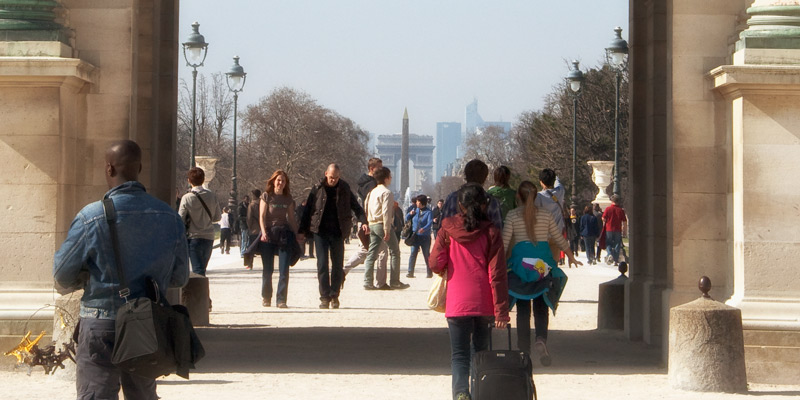 Returning to the Arc de Triomphe du Carrousel itself… The reliefs on this arch depict Napoleon's military victories at the beginning of the nineteenth century. The sculptured horses on top of the arch are copied from St Mark's Basilica in Venice.

The patch of ground the arch sits on is called the Place du Carrousel, located between the Louvre and the Tuileries Gardens, although nowadays it's unrecognizable as a separate square. It's also hard to tell that there once was a palace here that fronted on the place, called the Tuileries Palace. 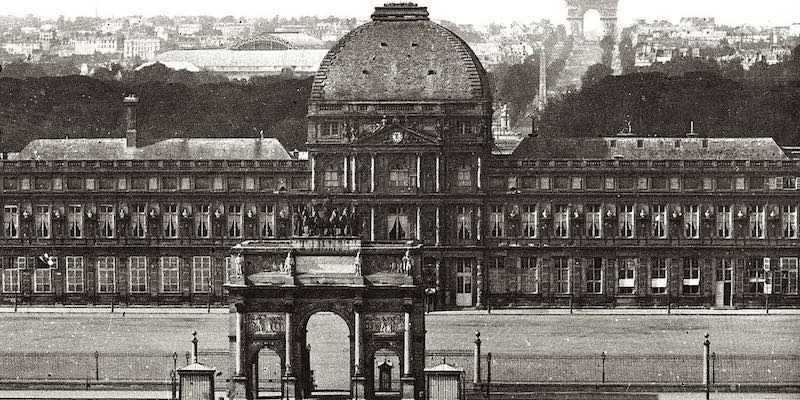 The Tuileries Palace in a photo from 1860, showing the two Napoleonic arches

The Palais des Tuileries was built way back in 1564 and over the centuries housed various Louis (XIV, XV, etc). In fact, it was the last home of the ill-fated Louis XVI and Marie Antoinette until their demise during the French Revolution. But, like the Hotel de Ville Paris (the city hall), the palace was burned by a mob during the Commune of 1871. The Hotel de Ville was restored, but the palais was never to be rebuilt.