"Stop! Here is the Empire of Death", reads the sign as you enter the underground tunnels. A trip to the Paris Catacombs might not be everyone's cup of tea, but it's an experience you'll never forget. A walk through the tunnels of the underground catacombs is an eerie reminder of the sometimes bizarre history of Paris.

For centuries Parisians were buried in cemeteries within the walls of the city. Eventually, this led to overcrowding and even to skeletons tumbling through the walls of cellars. In the 17th century, with no easy answer in sight, it was decided to move the remains to dormant limestone quarries in what were then the outskirts of the city. Today, the city has expanded and has built on top of the old limestone quarries, but the catacombs still exist beneath the streets of modern Paris — kilometres of walls made entirely of neatly stacked bones of the exhumed bodies. More than six million deceased French citizens are permanently below the houses and shops of the 14th Arrondissement.

Access to the catacombs is strictly limited, and only a relatively few visitors at a time are allowed into the Catacombs on any given day at any given hour. The wait time, then, can be long — it can be two to four hours. That's why we strongly recommend you sign up for a Paris Catacombs small-group guided walking tour that gets you underground ahead of the line. Even better, from your expert guide you learn spine-tingling tales and eerie legends as you go deep into subterranean Paris.

The size of the tour is limited, so be sure to book early.

Our tour guide was very knowledgeable and we learned a lot about the catacombs and the history of Paris. The tour was definitely worth it vs. going in without a guide. The locked tunnels were the most interesting areas down there."
– 5-Star Review

Exclusive, Limited-Access Tour of the Catacombs 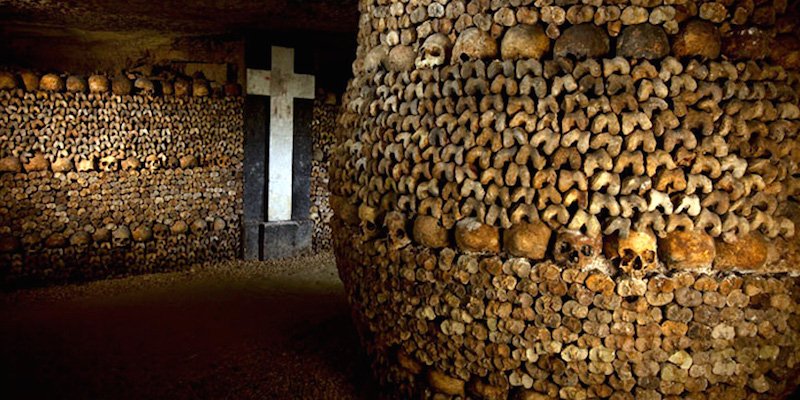 Not only is the number of people visiting the catacombs each day limited, so are the areas most visitors have access to. We like to go deep (so to speak) when we explore, and that's why we like this special tour. An experienced guide leads you past the line-ups for a detailed tour of this underground city — including visits to World War II bomb shelters, deciphering ancient inscriptions, and visits into the darkest nooks and crannies of this eerie place. All the while you are entertained with fascinating stories from the history of Paris and of the catacombs.

Amazing tour. Alberto was great, informative, fun and friendly. He made the tour exciting and interesting. He had so much knowledge. It was so cool to see the parts of the Catacombs not open to the public. Totally worth the money and would recommend to anyone!"
– 5-Star Review

Sure they're a bit creepy, but that's what makes the Paris Catacombs so interesting. Victor Hugo wrote about the catacombs in Les Miserables. French Resistance fighters used the catacombs tunnel system as a secret meeting place during World War II. Here are a few other things to know —