For those visitors who don't live in a city as defined by its river as Paris is, the Seine and its bridges hold an endless fascination. There are thirty-seven bridges spanning the waterway, spread over the thirteen kilometers the Seine travels through Paris. As you know, we love the bridges and have written about them more than once. (Five Of Our Favorite Bridges of Paris… Six Pedestrian Bridges Of Paris.)

We were also delighted by a piece from the City of Paris awarding certain of the bridges superlative titles like The Most Sumptuous and The Most Graceful and The Most Poetic. We ran with that idea and created this expanded look at the bridges Paris wouldn't be Paris without. (If you know what we mean!)

1. The Most Famous – Pont Neuf 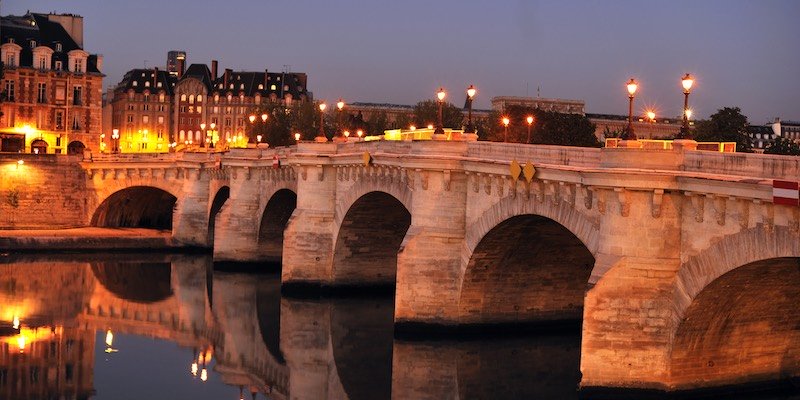 If age brings fame then Pont Neuf certainly qualifies for this title. Dating back to 1578, this is the oldest extant bridge spanning the Seine. Henry III (who was the third son of Catherine Medici to be king of France) laid the first stone on May 31 of that year. But Henry only had time to see the first part the work before he died eleven years later. It was Henry IV (no relation) who took the project to completion, crossing the finished bridge in 1606.

Pont Neuf is the first Paris bridge to be made of stone and not of wood. It is also the first bridge that did not contain houses — as was customary at the time in an already overcrowded Paris — and the first bridge to be decorated with the turrets, benches, 384 macarons adorning its cornices, and an equestrian statue of Henri IV on its central platform.

In the modern era it was the first (and only) bridge in Paris to be wrapped by the artist and Santa's elf trainer, Christo. That was in 1985. Today the bridge still sparkles from a 2007 restoration and cleaning.

2. The Most Fastueux – Pont Alexandre III 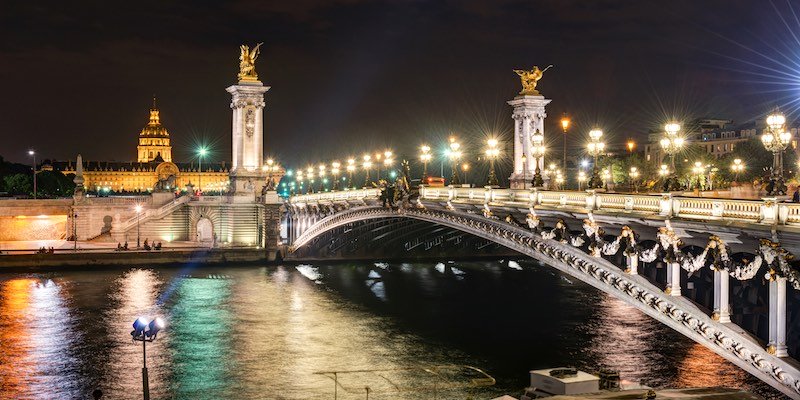 Sumptuous, magnificent, lavish — however you translate the superlative "fastueux" that the City of Paris attaches to this bridge — it's clear we have to be talking about Pont Alexandre III. Adorned with candelabras, lampposts and sculptures in copper and bronze, this piece of eye candy majestically spans the Seine between the Grand Palais in the 8th and Les Invalides in the 7th Arrondissement.

Built for the Paris Universal Exhibition of 1900, it celebrated the newly-forged Franco-Russian alliance. On October 7, 1896, Tsar Nicolas II himself laid the foundation stone in the presence of French President Félix Faure. Framed by monumental ornate pylons topped by gilded bronze Pegasus, the bridge is classified as a historical monument. It has been used as a location in films by Michel Audiard (Cry of the Cormoran), Woody Allen (Midnight in Paris), Luc Besson (Angel-A), and others. 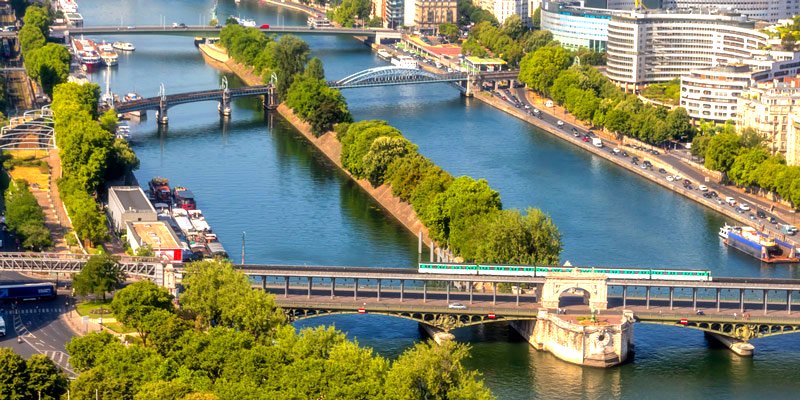 Pont de Bir-Hakeim as seen from the Eiffel Tower, photo by Mark Craft

Having said that about Pont Alexandre III's movie career, the Paris bridge with the most starring roles is Bir-Hakeim, with its unsurpassed view of the Eiffel Tower, the river, and period buildings in the 16th Arrondissement. The bridge is in great demand for advertising, television series, and movies. Think Last Tango in Paris from 1972 and Christopher Nolan's Inception from 2010.

Supported in its center by Île aux Cygnes (between the 15th and 16th Arrondissements), the two-story metal structure, built shortly after the Universal Exhibition of 1900, features Metro tracks on its upper level and serves motorists, pedestrians, and cyclists below, each with a dedicated lane.

4. The Most Graceful – Passerelle Simone-de-Beauvoir 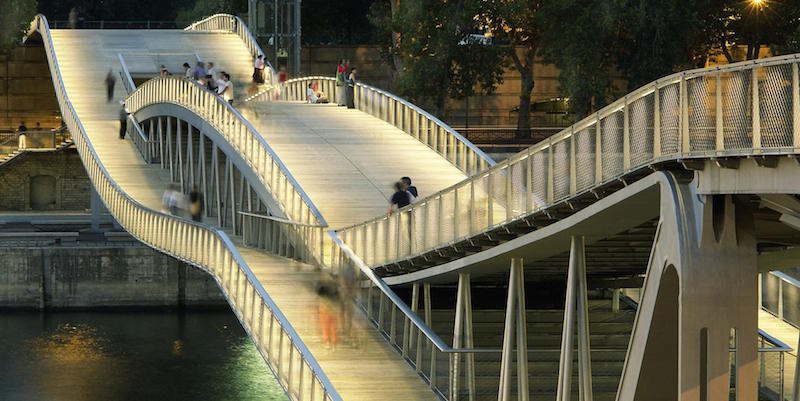 No surprise here. Passerelle Simone-de-Beauvoir is the most graceful bridge here and in any city. It's also the newest, and most modern, bridge in Paris dedicated to pedestrians (that's what passerelle refers to) and other forms of "soft" transportation. Designed by an Austrian architect named Dietmar Feichtinger and inaugurated in 2006, its slender steel and wooden structure uses advanced construction techniques. Composed of two intersecting curves, it connects the forecourt of the François-Mitterrand Library (13th) with the linear, modern and pleasing Parc de Bercy (12th). 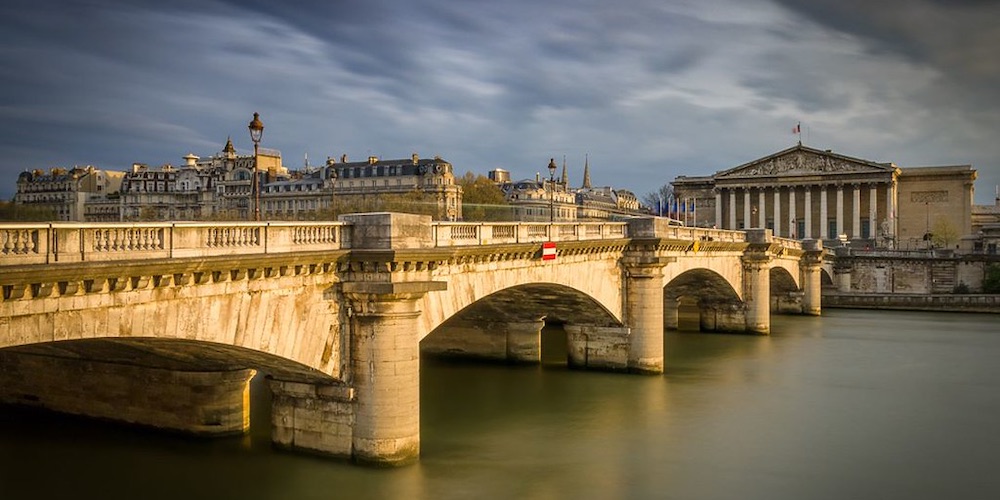 Pont de la Concorde was built between 1787 and 1791, in the era of the French Revolution, with stones from the Bastille prison destroyed during the insurrection that began on July 14, 1789. Using materials from the Bastille was a kind of inside joke, giving Parisians the opportunity to walk on the symbols of royalty while crossing from the Place de la Concorde (formerly known as Place Louis XV) to the National Assembly. Another nod to the revolutionary spirits: unlike most other Paris bridges, Concorde did not include mooring rings, which were thought to evoke memories of the prisoners chained to the Bastille walls.

A few years later, and post Revolution, Napoleon lined the bridge with statues of his generals. However, the weight was too great for the structure and the statues (not the generals) were soon moved to Versailles.

6. The Most Modernistic – Pont Charles-de-Gaulle 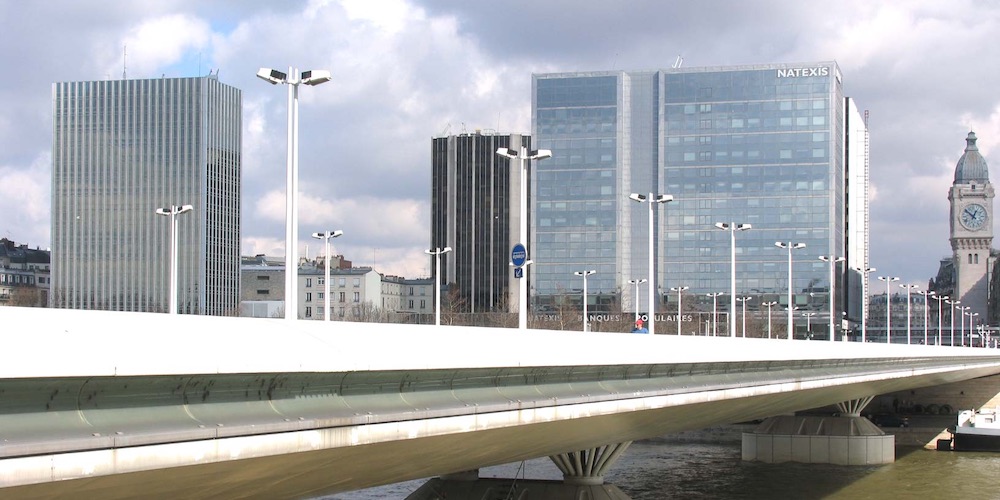 Built between 1993 and 1996, the bridge named for general and French president Charles de Gaulle is the latest roadway bridge to cross the Seine. With an elegant style in the shape of an airplane wing, built in white steel, it fits perfectly into the modern district of the Bercy and National Library sectors, close to Passerelle Simone-de-Beauvoir. It offers a 60-foot-wide, one-way roadway where cycle lanes and raised sidewalks allow pedestrians to cross safely.

7. The Most Poetic – Pont Mirabeau 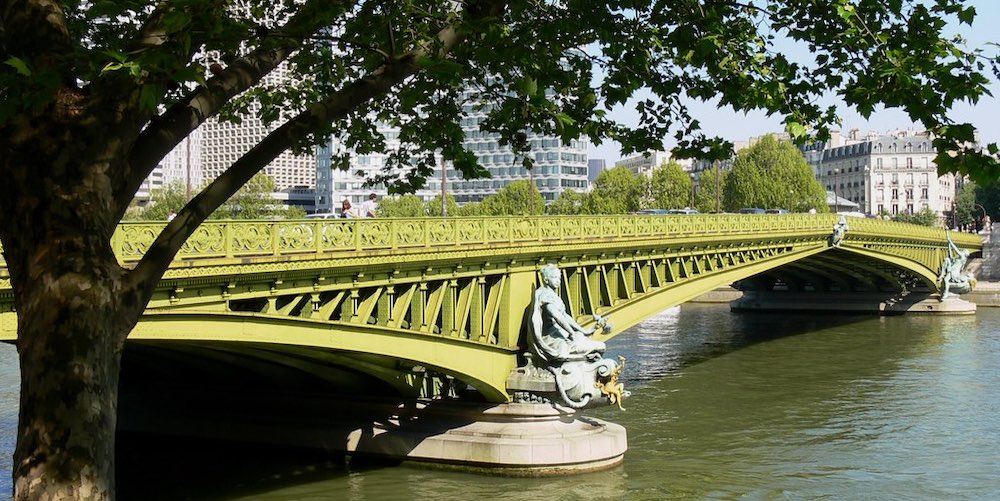 Guillaume Apollinaire (1880-1918), a French poet and playwright, was a friend of Picasso and hung around with the likes of Gertrude Stein, Jean Cocteau, Erik Satie, Ossip Zadkine, and Marc Chagall. In fact, it was he who came up with the term Cubism to describe the modern art movement of the 1910s and the term Surrealism to describe the works of Erik Satie. He was wounded in World War I and died during the Spanish Flu pandemic only days before the war ended.

Even with that action-packed biography perhaps his most famous work, and lasting legacy, was his 1913 poem, Le Pont Mirabeau, that begins something like this, in translation —

Under the Pont Mirabeau flows the Seine
And our loves
It must remind me that
Joy always comes after pain.

A designated historic monument, Pont Mirabeau was built at the very end of the 19th century to connect Quay André-Citroën (15th) to the Right Bank in the 16th. The beautiful yellow-green metal structure is adorned with four bronze sculptures representing the City of Paris, Commerce, Navigation, and Abundance.

8. The Most Artistic – Pont des Arts 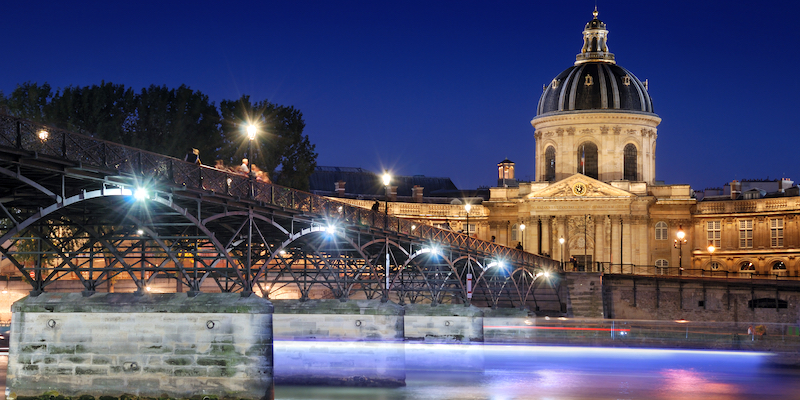 The obvious winner of this title is the iron bridge that connects the world's most famous art museum (the Louvre, in case you hadn't guessed) and the classical Institut de France on the Left Bank. In his influential broadcast series Civilization art historian Sir Kenneth Clark had this to say while gazing on the Pont des Arts—

"What is civilisation? I do not know. I can't define it in abstract terms yet. But I think I can recognise it when I see it: and I am looking at it now."

The Most Soaring – BONUS BRIDGE! 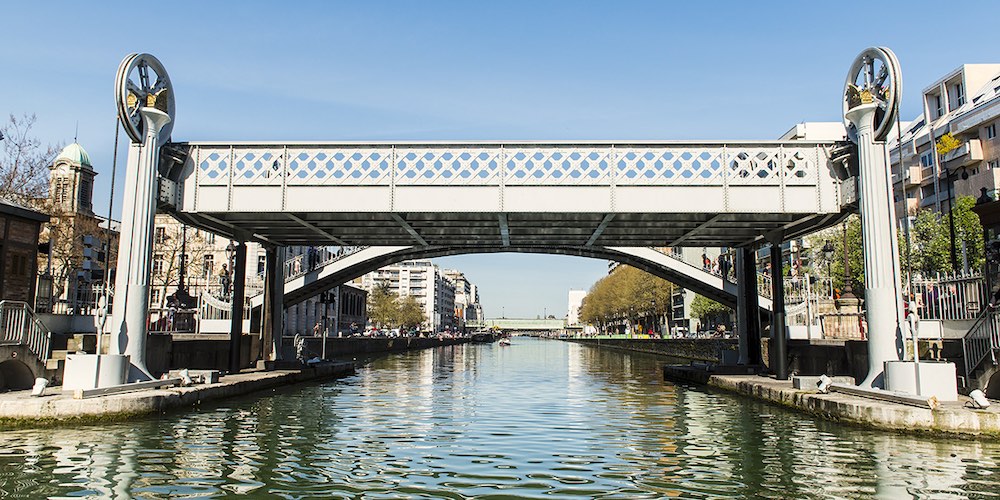 It doesn't cross the Seine, but the Pont Levant de la Rue de Crimée is a marvel of the industrial age that was the end of the 19th century — a lift bridge that spans Canal de l'Ourcq where it enters the Bassin de la Villette in the northeast corner of Paris (19th Arrondissement).

Built in 1885, the steel bridge was the first hydraulic horizontal lifting structure in France. Even today, the bridge is raised as many as twenty-five times a day to allow barges and boats to pass underneath. Pedestrians can still cross the canal on a fixed, elevated footbridge, located right next to the lift bridge. (You can spot the footbridge in the photo, behind the lift.)