Second only to the Louvre in terms of popularity, the Musée d'Orsay holds the world's best collection of French art from the period 1850 to 1914. Built as a Beaux-Arts train station and debuted at the 1900 Universal Fair, it was transformed into the museum in 1986 to hold Impressionist treasures previously housed in the Louvre and Jeu de Paume. (The train station that now houses the museum was scheduled to be demolished in the 1970s. Good thing it was listed as a French Historic Monument in 1978, halting any demolition plans.)

At Musée d'Orsay you'll want to spend hours exploring the Impressionist collection, but when you get hungry and tired, take a break in one of the cafes or the restaurant. Let's discuss the dining options. All the restaurants are inside the Orsay, you can't access them without a museum ticket. 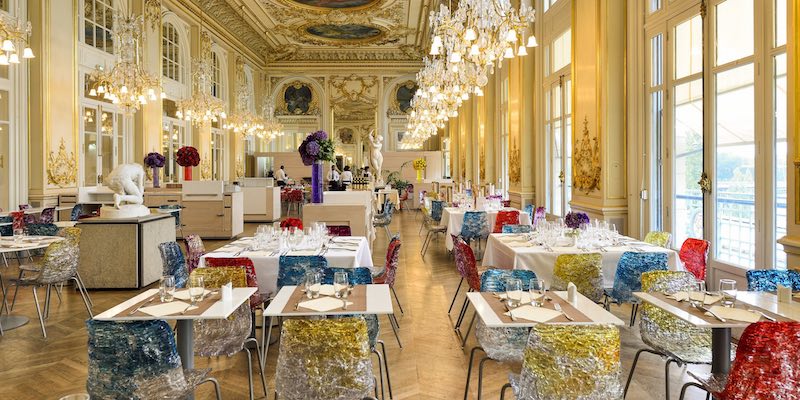 Once the formal restaurant of the Hotel d'Orsay, located in the train station, this room is as magnificent as when it first opened in 1900. If this is your first visit to the Musée d'Orsay, this is our number-one dining recommendation. You'll be dazzled by the chandeliers, the tall gilded ceilings, and the wall of windows that overlook the courtyard and the Seine River. No wonder it's been listed as a French Historic Monument.

Is it fine dining? The service and food can be spotty, but you can expect it to be average to excellent, not bad for a museum restaurant. Sometimes, the setting is more important than the quality of the food. The menu offers traditional French cuisine, along with a few inventive, modern dishes. The restaurant can be very busy at peak times like high noon. Plan to arrive at 11:30 PM or 1:00 PM for a chance of standing in a shorter line. 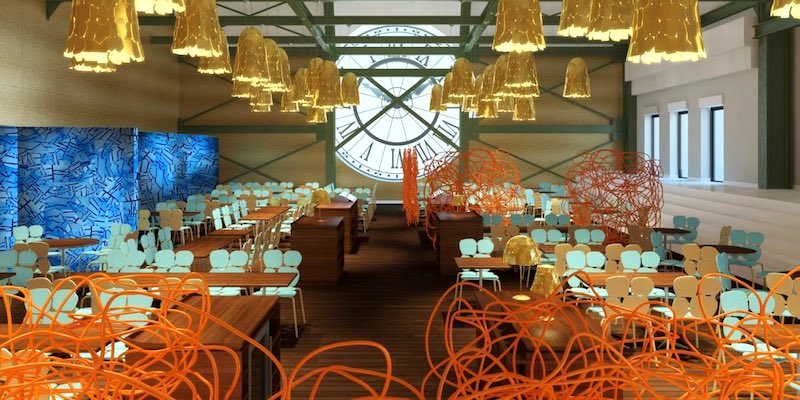 Located just outside the Impressionist Gallery on the 5th floor is Café Campana. Renovated in 2011 with a bold design by Brazilian designers, brothers Fernando and Humberto Campana, the cafe is now a modern, colorful dining room with the famous giant clock as the centerpiece. The brothers drew design inspiration from Emile Gallé (1846-1904), considered the godfather of Art Nouveau.

The menu is classic Parisian brasserie with hearty salads, foie gras, charcuterie, quiche, and a long list of desserts like Ile Flottante, baba au rhum and chocolate hazelnut cake. This is a full-service restaurant with sit down service. It's not quite as formal as Le Restaurant but the sleek design is a good option for those seeking a modern setting. 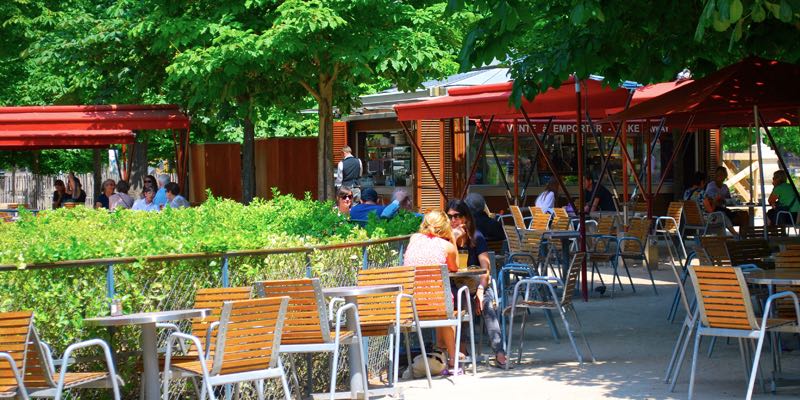 Of course, you can always leave the Musée d'Orsay and have lunch at a nearby restaurant. It's a 9-minute walk to cross the Seine River on the pedestrian bridge, called Passerelle Léopold-Sédar-Senghor (we don't name these things), to access the Jardins des Tuileries where you can dine at outdoor restaurants, Café Diane or Terrasse de Pomone (open from April to October). Read about those cafes in our guide to where to eat at the Louvre…