At the edge of the Bois de Boulogne, near the western border of Paris, sits the imposing and monumental structure that houses the Fondation Louis Vuitton. Part art museum, part exhibition space, part concert hall and conference center, the building is where the foundation pursues its goals of promoting contemporary artists and making art and culture accessible to all. 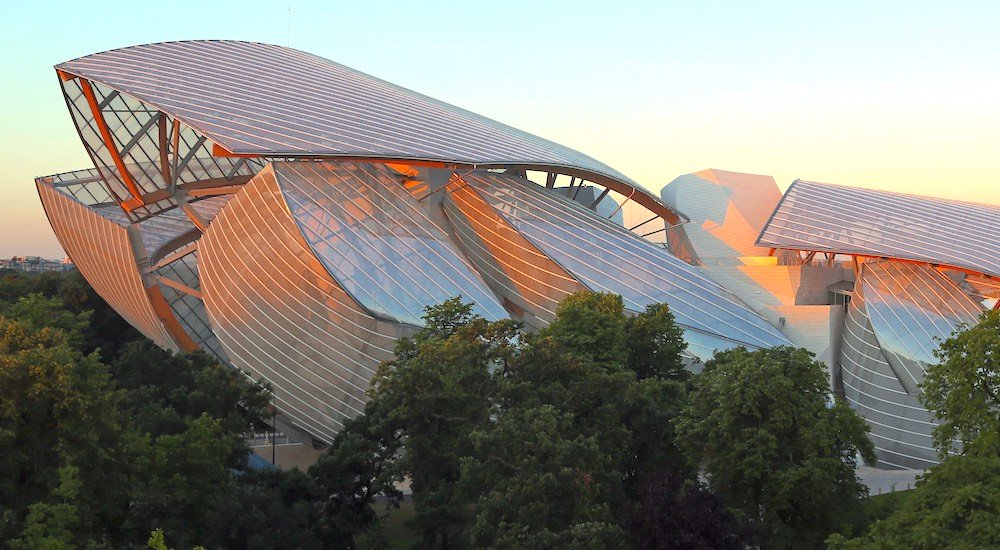 The somewhat controversial edifice, designed by Frank Gehry and completed in 2014, is composed of twelve curved glass panels that are meant to mimic the wind-filled sails of a ship at sea. A dozen years and €135 million in the making, the building — and the museum it contains — was the dream of France's wealthiest man, luxury-group LVMH head Bernard Arnault. 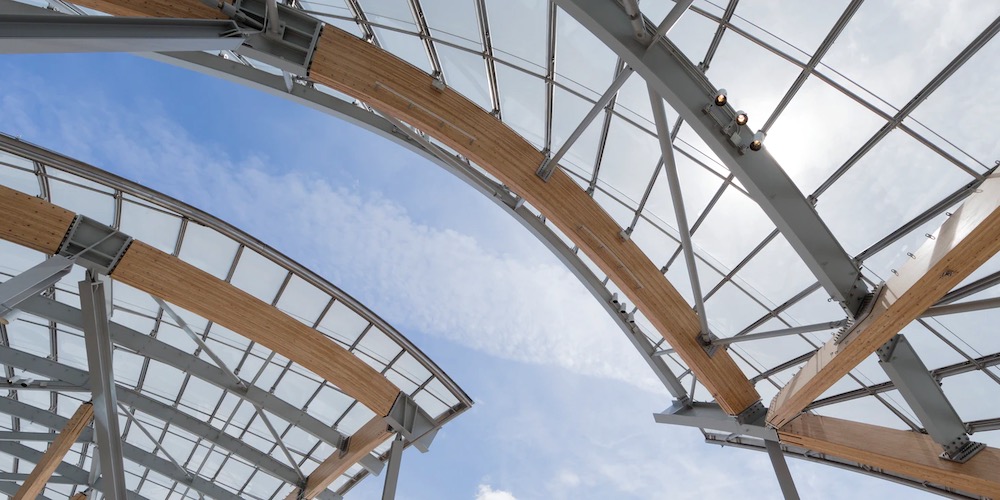 The roof can open to the sun and sky

The uber-modernistic space has room for a permanent collection, temporary exhibits, as well as various multidisciplinary events (music, dance, film screenings) filling the annual calendar of the fondation.

There's a concert hall in the prow of the building that faces a cascade of water. The hall can accommodate between 320 and 1,000 people, but all seats can disappear into the floor to transform the space. The raised stage can also vanish, while the sliding rear wall opens onto an adjoining gallery, to create a vast area for performance art, for dance, or for fashion shows.

The structure's central, white-clad tower (nicknamed, by who we know not, The Iceberg) is an elaborate web of steel and wood panels. The panels, which can be seen as clouds or the sails of a ship, reflect the setting of trees and sky of the Bois de Boulogne.

The building's four terraces look out over the green expanse of the Bois de Boulogne and toward Paris itself, from the Arc de Triomphe to the towers of La Défense.

A Place for Contemporary Art 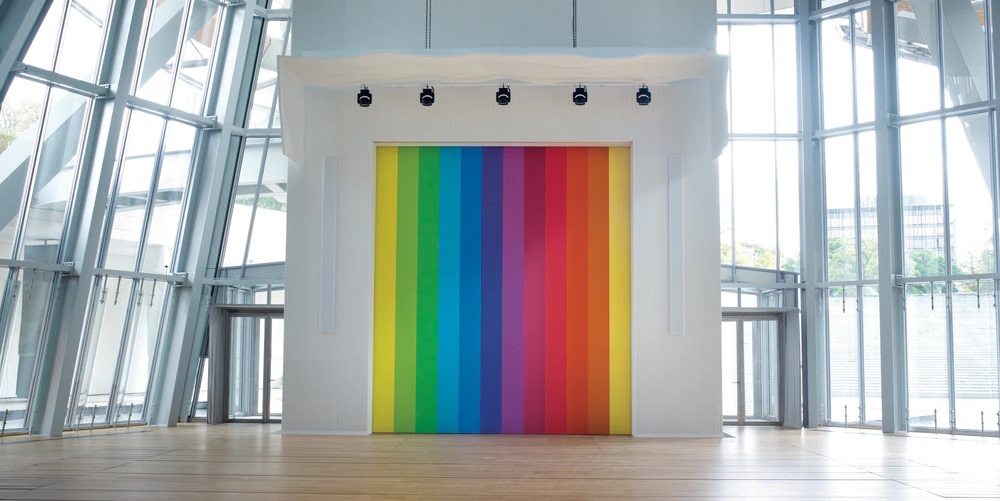 The museum's art collection — a combination of works owned by the LVMH luxury group (which owns the Louis Vuitton stores, and much more) and by Arnault — includes works by Jean-Michel Basquiat, Gilbert & George, and Jeff Koons (and much more). 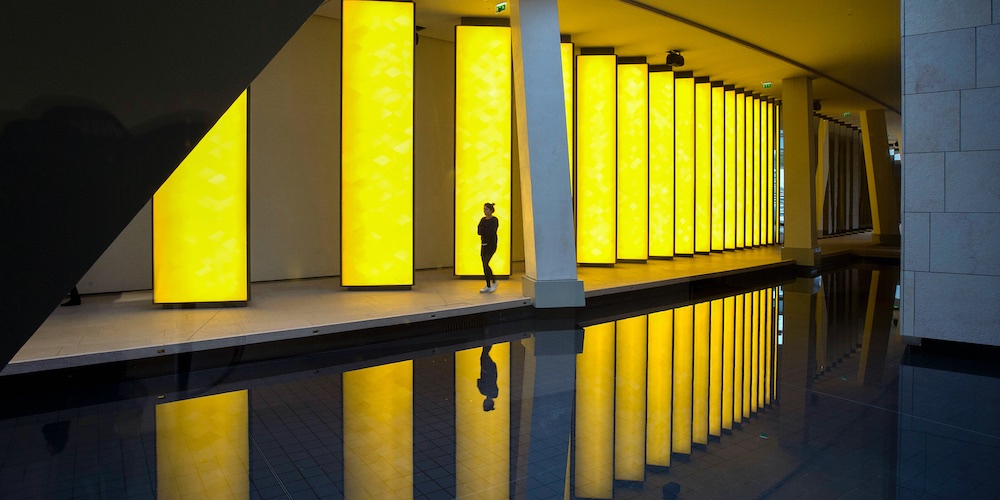 Inside the Horizon, by Olafur Eliasson

Specially-commissioned pieces include Spectrum VIII by Ellsworth Kelly, consisting of twelve coloured strips in the building's auditorium. Danish artist Olafur Eliasson created Inside the Horizon, made up of forty-three prism-shaped yellow columns that are illuminated from the inside and placed along a walkway. Adrián Villar Rojas created a piece called Where The Slaves Live that contains random items like discarded sneakers and cables, installed under one of the roof's curvy glass sails.

Restaurant Le Frank is led by Jean-Louis Nomicos, a Michelin-starred chef and owner of the restaurant Nomicos, nearby in the 16th Arrondissement. There's a lunch menu from noon to 4 PM, followed by a sweet & savory menu in the afternoon. Dinner is on Friday and Saturday nights only, and solely by reservation. 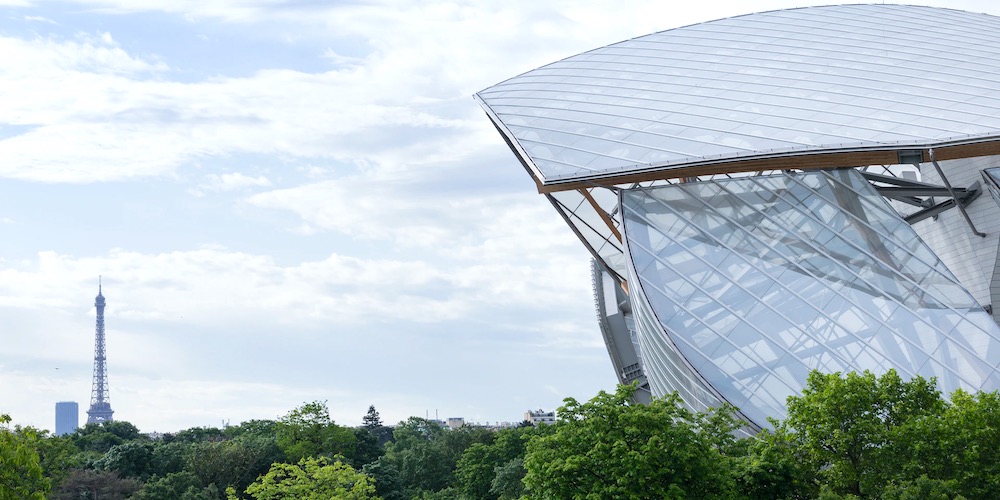