Walking through the twenty-five green hectares of Parc des Buttes-Chaumont you might be shocked to learn that you are passing over one of the most notorious sites of medieval Paris — the Gibbet of Montfaucon. Not just a gallows (or "gibbet") in its own right, but a place where the bodies of people executed elsewhere in Paris were displayed for months, even years.

From that grisly beginning it's amazing that Parc des Buttes-Chaumont is now one of the most pleasant spots in the city, with a large expanse of grass, a lake, suspension bridge, and lot of paths, benches and playgrounds.

1. The Lake at Buttes-Chaumont 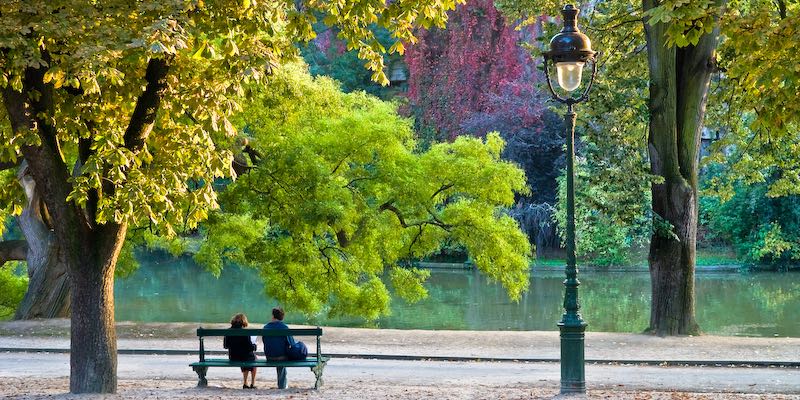 The park takes its name from the bare hill (chauve-mont) that once occupied this site. It became a place where gypsum was mined, and where the limestone was quarried to be used in buildings in Paris and the US. Worse, though, was that the site also became a dumping ground for sewage, even horse carcasses. Luckily, during the 19th-century renovation of Paris under Napoleon III chauve-mont was chosen as a place for a large park, as part of the emperor's fascination with endowing Paris with green spaces.

The artificial lake created at that time wraps around a hilly central island. The lake attracts waterfowl and other birds and is stocked with fish. You will often seen nets and other paraphernalia used by students and researchers studying the lake. 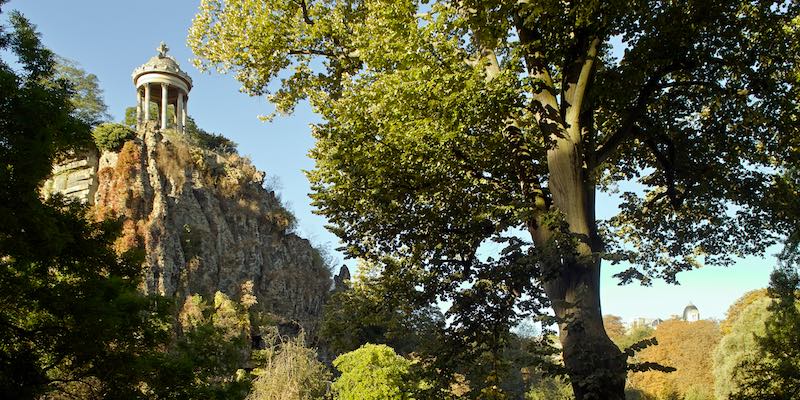 The 19th-century planners cleaned up the site and dumped in tons of soil to fill the pits left by the limestone mining operation. Then dynamite was used to "sculpt" the site into the craggy shapes you see today, including the 50-metre-high central hill with cliffs, an interior grotto, pinnacles, and arches. Up on top, overlooking the rest of the park is a small, round belvedere, based on the Roman Temple of Vesta in Italy. From the temple you can see a lovely view of Montmartre and the white cupolas of the Sacre-Coeur. 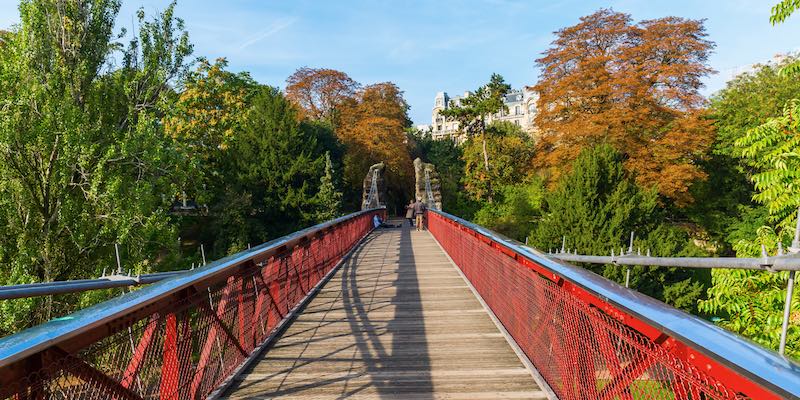 How do you get to the temple on the island? There are a couple of bridges, including the delightful suspension bridge spanning 200 feet, 72 feet above the lake. Not only is the bridge fun to walk on and a delight to see, it has history — it was built by The Man himself, Gustave Eiffel, who was a famous bridge builder long before he erected the tower named after himself.

4. The Waterfall in the Grotto

Inside the craggy hill is a 65-foot-high cavern created when the park was a quarry. The park builders turned this into a fantasy grotto, complete with artificial stalactites, light & shadows, and a 60-foot-high waterfall. The grotto is a refreshing place to visit on a hot summer's day, with mist from the waterfall cooling the cavern.

The Waterfalls of Paris

Nighttime in Paris – The Most Romantic Things To Do 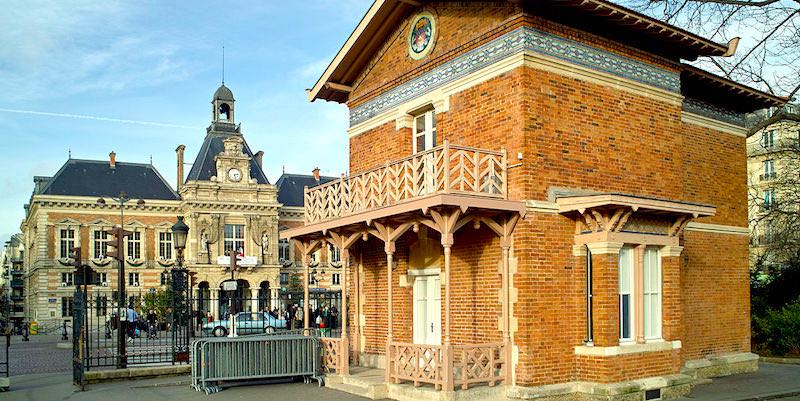 Across from the main entrance to Parc des Buttes-Chaumont (on the north side, at Place Armand-Carrel) is the Mairie of the 19th Arrondissement, the town hall. This pleasing building was designed by Gabriel Davioud in 1876, the architect of the City of Paris, who also designed the Temple de la Sibylle, and the park entryway as well.

Davioud was responsible for a lot of what we take today to be typical Parisian design. He worked closely with Baron Haussmann during the massive renovation of Paris and , in that period, was responsible for the Saint-Michel Fountain in Place Saint-Michel and the two building flanking the Place du Châtelet. It's likely that he was a major contributor to the design guidelines that Haussmann imposed on all new buildings along the boulevards and avenues that were plowed through in this period.

More than just buildings, Davioud also created the distinctive designs of Parisian benches, lamp posts, bandstands, even fences and sign posts. So, when you stop for a rest on one of those typical Paris benches, remember to give a silent thanks to Gabriel Davioud.

Guide to the 19th Arrondissement 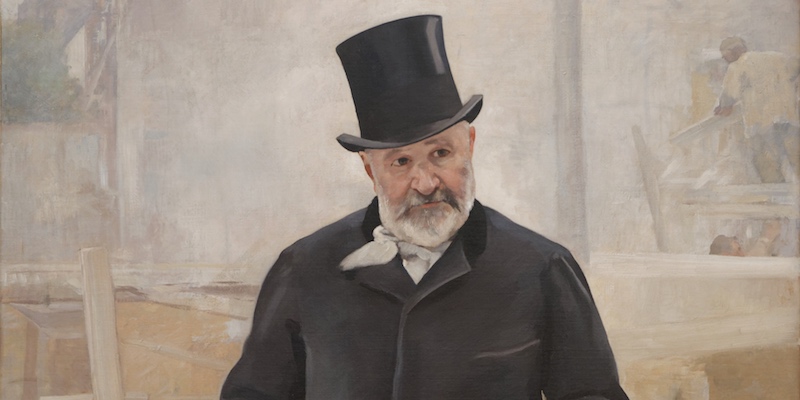 Baron Haussmann, Napoleon III's right-hand man in city planning, is too often given all the credit for the 19th-century modernization of Paris. We've been guilty of this. In fact, Haussmann was an able (and determined) administrator who was skilled in finding the right people to do the work that was needed. One of these was Jean-Charles Alphand.

Alphand was responsible for the design and construction of Parc des Buttes-Chaumont, which took place from 1864 until the park opening in 1867. He was already very experienced, having built the massive parks of Bois de Boulogne and Bois de Vincennes in 1852 and 1855. Alphand brought in the best to assist him, including horticulturist Jean-Pierre Barillet-Deschamps, the chief gardener of Paris, and, as we have seen, Gabriel Davioud.

You can find more of Alphand's work elsewhere in Paris today. There's Boulevard Richard-Lenoir, the gardens flanking the Champs-Elysées, and Parc Monceau, another one of our fave Paris parks. It's fun to drop into the Petite Palais to visit the portrait of Alphand (shown above) by Alfred Philippe Roll. 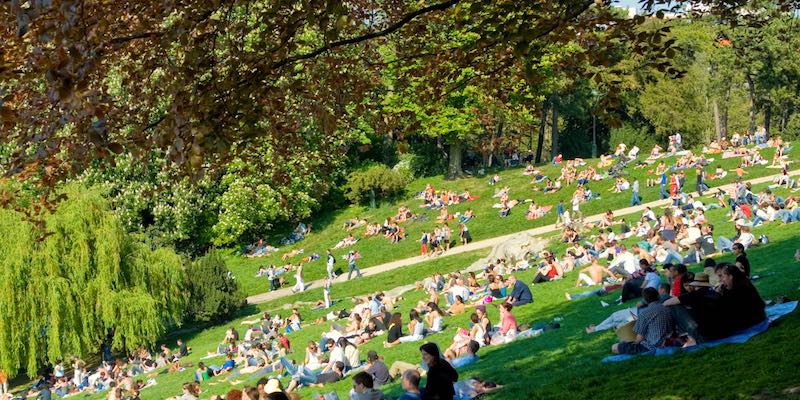 If you want to find a place where the kids can run around on the grass, Parc des Buttes Chaumont is the place for you. For refreshment there are a dozen drinking fountains as well as three or four restaurants and snack bars. It's a great place for exploring, relaxing, walking, and jogging.

For kids and families there are loads of possibilities — from crossing the bridges and climbing to the belvedere to pony rides, playgrounds, puppet shows, and sandboxes. The park is a bit out of the way of the central Paris sights, but it's worth a visit. 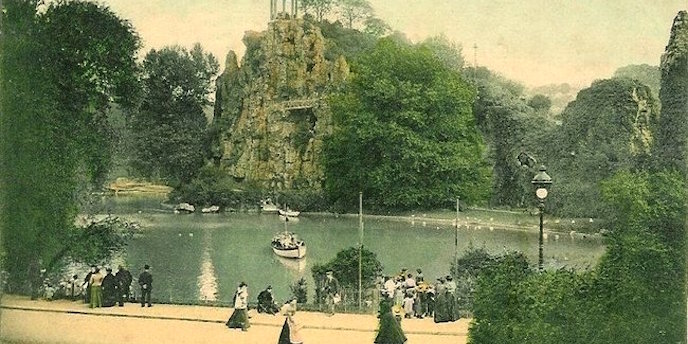