Place des Vosges – A Tranquil Garden Refuge In The Marais

If you pace it off you'll find that the Place des Vosges is a perfect square, 140 metres by 140 metres (about 150 yards). Modeled on the piazzas that were appearing in Rome and Florence at the end of the 16th century, Place des Vosges itself became a model for the spate of squares that subsequently appeared in other European cities.

Today the square is one of the most relaxing places in the bustling Marais quartier, featuring lawns, fountains, and tree-shaded benches enjoyed by Parisians and visitors alike. But it's the history of Place des Vosges that we find particularly fascinating.

Henry IV (1553 to 1610) is known as the Great Builder (by us, at least) and was the first French king who made a real and lasting impact on Paris, shaping this highly medieval city into a Renaissance capital. Many of his works still define the Paris of today, like the Pont Neuf that crosses the end of Île de la Cité to span the Seine from the Right Bank to the Left Bank; and the peaceful Place Dauphine, also on Île de la Cité.

To appreciate Henry's transformation of the Marais we need to go back in time just a bit further, to a generation before Henry. In the 1500s the Hôtel des Tournelles occupied the site of what is now Place des Vosges. This was a somewhat motley collection of medieval buildings that had been used by royalty for one thing or another. One of those things was for jousting matches, and you can see a jousting knight on horseback in the map from 1550 (below). 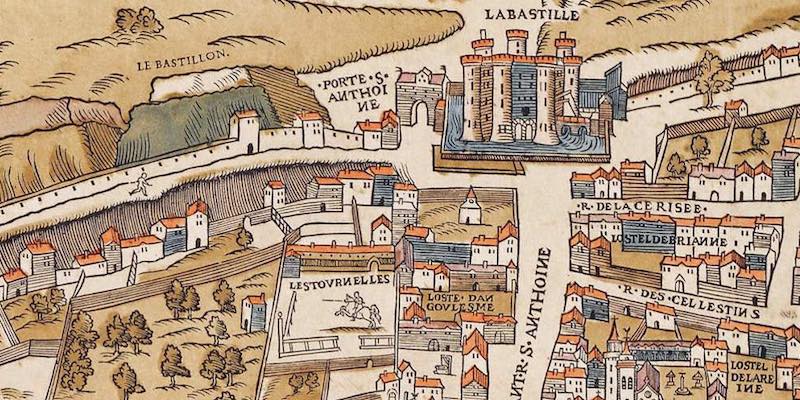 Unfortunately, when French king Henry II (not a direct ancestor of Henry IV) tried his hand at the sport he was mortally wounded, dying at Hôtel des Tournelles in July 1559. (If you want to get deep into royal Parisian history, head out to Rue Saint-Antoine — you can also see it on the 1550 map — and stand in front of #62. Right there, outside of Hotel de Sully, is where Henry II was wounded during the joust. By the way, cutting through the gardens of Hotel de Sully leads you to a hidden entrance to Place des Vosges.)

Henry II's widow, Catherine de Medici, had always hated Tournelles (too clunky, too old-fashioned, not Italian enough) and used Henry's death as the perfect excuse to have most of the hôtel torn down and the land sold. She used the money she made from the sale (and apparently some of the building materials) to build the Tuileries Palace across from the Louvre. She was also the one who created the gardens of the same name. 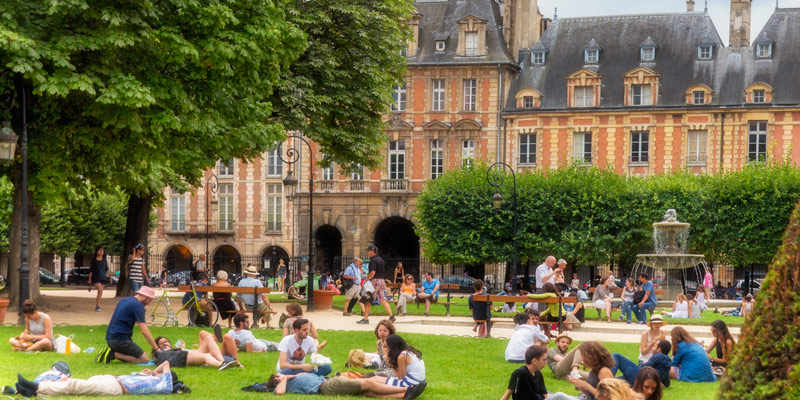 When Henry IV cast his eye over the Maris fifty years later, he first imagined using the remaining buildings of the Tournelles as the site for a silk industry to compete with that of Italy. When that didn't pan out he decreed that the space would be used to create elegant residences, to draw the cantankerous French nobility into Paris where he could keep an eye on them — although Henry put it this way: "It is more than necessary than ever to increase the size of Paris so as to accommodate the seigneurs, gentleman, and other officials of our entourage."

The revolutionary thing about Place Royale (as Henry initially named it) was the uniformity of the buildings that surrounded it — the distinctive and pleasing red brick and white stone design you still see today. All of the original buildings still exist, which is quite different from Henry's Place Dauphine where, though a similar uniform design was first imposed, most of the original buildings have been replaced or modified over the centuries.

By the way, part of Henry's overall area improvement was paving over the existing open sewer to create today's Rue Turenne, which became a highly fashionable street housing the dressmakers and hat-makers that serviced the "seigneurs, gentleman, and other officials". On that street and others in the Marais, Henry insisted on a straight building line along the street. Clearly Haussmann was influenced by the harmony this created when he devised his own building regulations 250 years later.

Henry IV also began another ambitious scheme in the Marais to create a quartier for government offices and foreign embassies. The area was to have evoked the regions of France. Malheureusement, Henry was assassinated in 1610, before this scheme could be completed. All that remains today of the project are a few streets with names like Rue de Bretagne, Rue de Normandie, and Rue de Poitou. 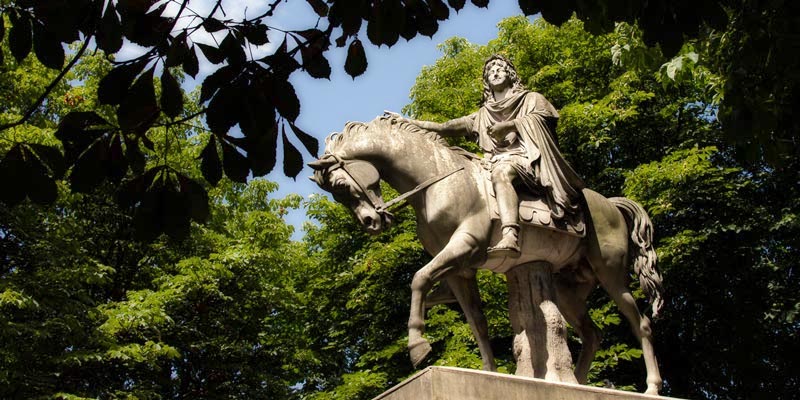 In fact, Henry was killed before the Place Royale dedication ceremony, which took place in 1612 as part of the celebration of the engagement of his son Louis XIII and Anne of Austria (they were the parents of the Sun King). Richelieu, who became Cardinal Richelieu just when Place Royale was being built, later had an equestrian bronze statue of Louis XIII placed in the center of the square.

Going forward in time we come to… the French Revolution of 1789, when all traces of royal history were vigorously erased. The statue was removed (later replaced by restoration king Louis XVIII) and the square was re-named in honor of the département of the Vosges, the first jurisdiction in France to pay taxes to the new revolutionary regime.

Some famous people have lived in the buildings surrounding Place des Vosges; the one most celebrated today is French author Victor Hugo, whose house in now a museum dedicated to him. But we were pleased to learn that Madame de Sevigné, the famous 17th-century writer of letters, was born here. Even Cardinal Richelieu lived here for twelve years.

Today, in the arcades surrounding the place you can find art dealers and antique shops, as well as several restaurants, including the three-Michelin-star L'Ambroisie. 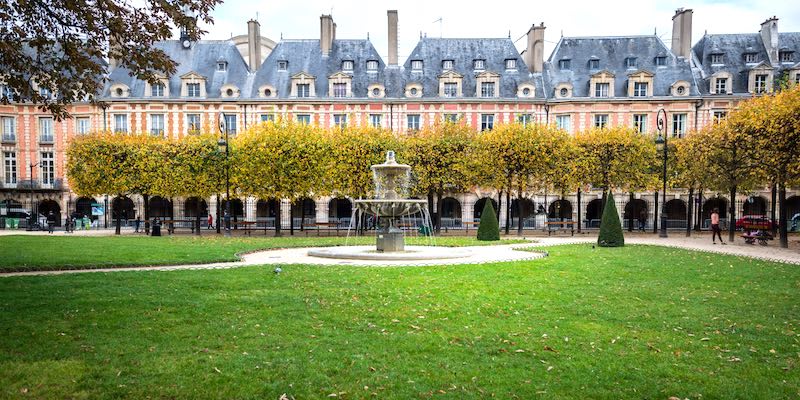