8 Remarkable Fountains Of Paris That Helped To Define The City

It might not be obvious, but Paris is a city built on water and fountains. For centuries fountains supplied drinking water to the thirsty city. Napoleon (it's always about Napoleon, isn't it?) realized how important fountains were in providing clean water to Parisian; he decreed that water should flow day and night and be freely available to all. Bonaparte established programs to clean and restore existing fountains plus commissioned fifteen additional fountains.

Once you start to pay attention, even today you realize the fountains of Paris are a major destination in their own right. There are thousands of working and decorative fountains dotting the Parisian landscape. Take a look at these eight fountains of Paris as you plan your next H2O tour of the City of Water. 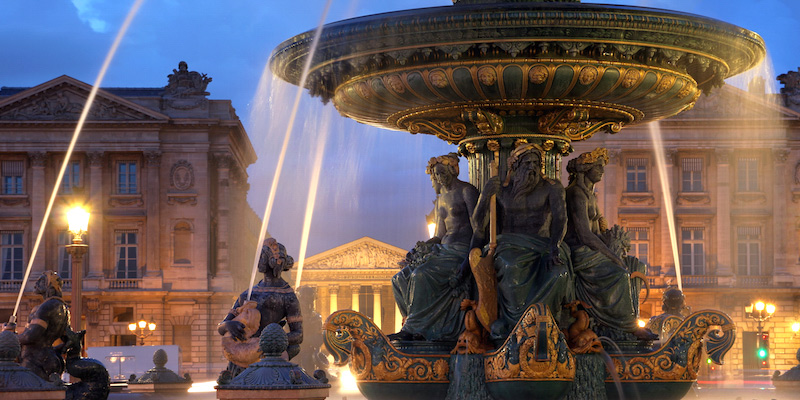 There are two majestic fountains that steal the show at Place de la Concorde. Completed in 1840 when Louis-Philippe, the last king of France, reigned supreme, the Maritime Fountain (the one closest to the Seine) honors maritime commerce while the Fountain of the Rivers, to the north, pays tribute to the abundance of the Rhône and the Rhine rivers. 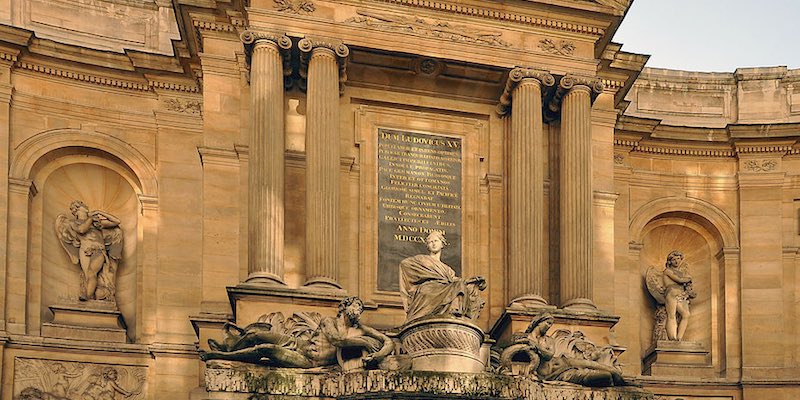 We have Edme Bouchardon, royal sculptor to Louis XV, to thank for creating this richly decorated and ornate fountain celebrating the four seasons. In his proposal Bouchardon described the principal figure, a well-dressed and majestic woman to represent the City of Paris. In one hand, she holds the prow of a vessel while on her head she wears a crown. A figure at her side represents the Seine, another figure represents the Marne river.

The structure's four bas-relief figures represent Les Genies des Seasons, The Spirits of the Seasons. Bouchardon's intention was to show the abundance of Paris witnessed in every season of the year. When you're here, make sure to study the fine bas-reliefs representing spring, summer, autumn, and winter. (You may have to tip your head back quite a bit. Rue de Grenelle is a pretty narrow street at this point.) 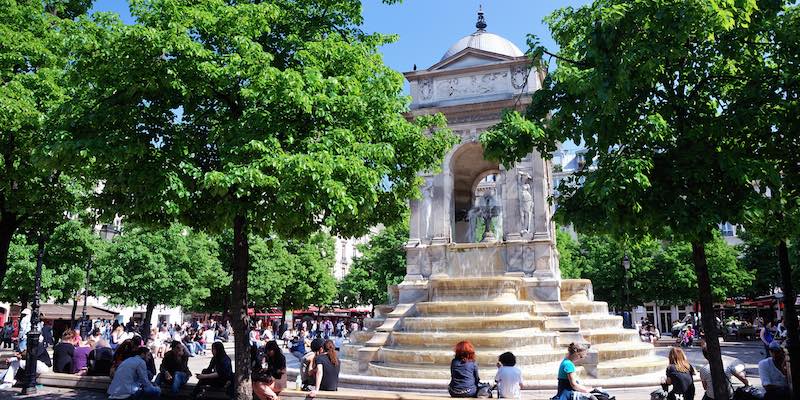 This fountain on Place Joachim-du-Bellay, originally named the Fountain of the Nymphs, was completed in 1550, making it the oldest monumental fountain in Paris. It was built to commemorate the royal entry of Henry II into the city and was royal sculptor Jean Goujon's most important commission. The fountain was originally built on Rue Saint Denis, one of the oldest streets in Paris. It has been moved a few times since then, finally settling in its current location in the Marais near Les Halles. 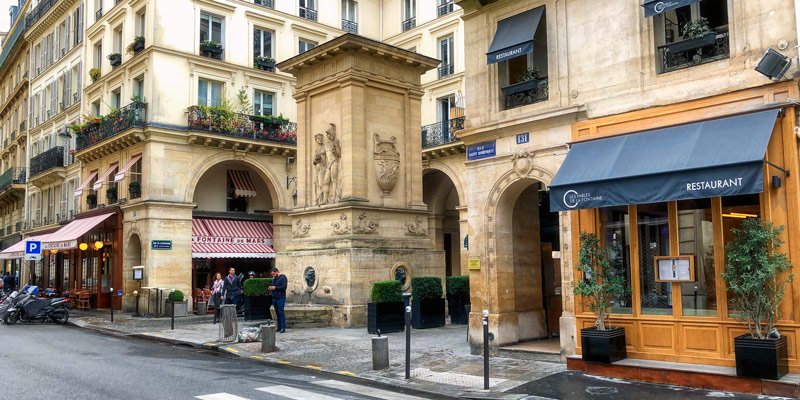 Napoleon appointed the polymath François-Jean Bralle — designer, architect, hydraulic engineer — to build fifteen new fountains, starting in 1806. One of these is the Fontaine de Mars, still in its original location on Rue Saint-Dominque. Although it's not apparent today (due to subsequent building construction) the fountain is near Les Invalides, the military hospital, and so was named for the Roman god of war. A bas-relief sculpture of the god appears on the fountain as does a sculpture of Hygieia, goddess of health.

The fountain is located on a small place that is flanked by two restaurants that honor the location. Restaurant Fontaine de Mars is one of the oldest bistros in Paris. Opposite is the Michelin-starred seafood restaurant, Les Fables de la Fontaine, founded by super-chef Christian Constant, who still runs three other restaurants along Rue Saint-Dominique. 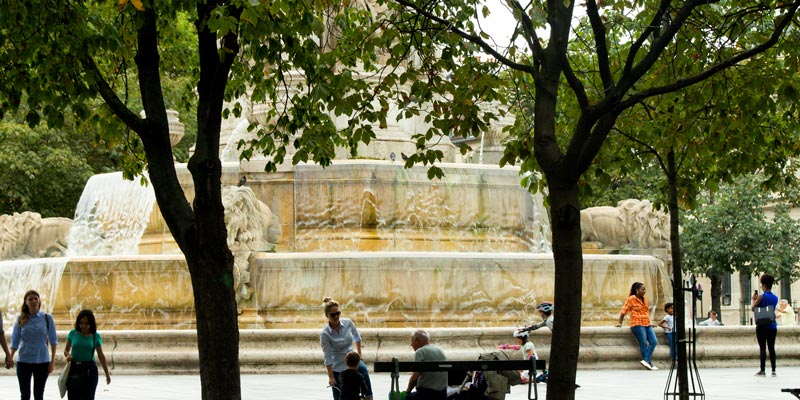 Hands down, this is the most spectacular fountain in Paris. In fact, it's hard to miss as it's also one of the biggest fountains in Paris. Completed in 1848 by the architect Louis Visconti (he also designed the tomb of Napoleon) it's also called the Fountain of the Four Bishops — Fontaine des Quatre Evêques — as there are four statues depicting famous bishops of the era. 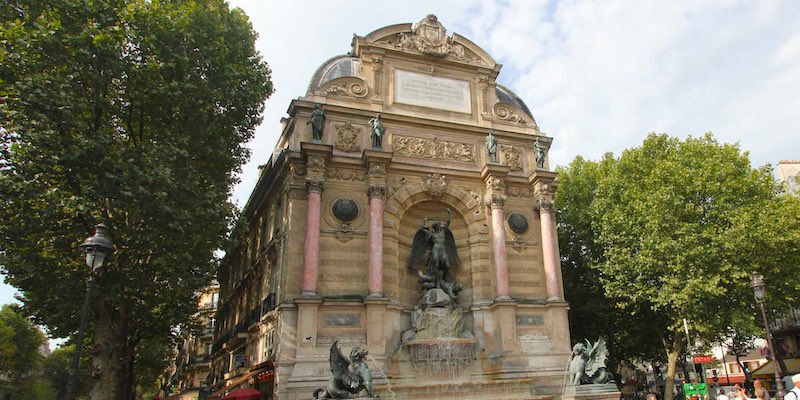 Once you start studying Paris, as we tend to do, you'll notice that Gabriel Davioud's name often pops up, which makes sense since he was the official architect of Paris parks and public spaces in the 19th century when so much urban renovation was being completed. Davioud was responsible for many monumental structures, including fountains. One of these is the Fontaine Saint-Michel.

The fountain was built along with an enormous new boulevard called Boulevard Saint-Michel, part of Baron Haussmann's reconstruction of Paris in the latter half of the century. Haussmann asked Davioud to design a fountain grand enough to match the scale of the new Place Saint-Michel. The fountain, along with many other symbols of the Second Empire, was damaged by angry mobs during the 1871 uprising that led to the Paris Commune. It was eventually repaired and, since 1926, has been listed as a historic monument by the French Ministry of Culture. 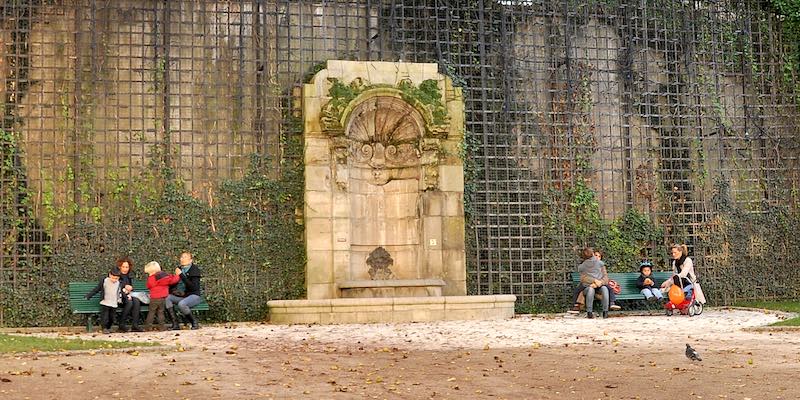 The Fontaine de l'Abbaye de Saint-Germain-des-Prés (that's a mouthful!) was built during the transition between the reigns of Louis XIV and Louis XV. Its purpose was to provide fresh drinking water to the citizens of Paris living near Église Saint-Germain-des-Prés. The fountain's mechanics were designed by Jean Beausire, the chief fountain-maker for Louis XIV, who built more than twenty fountains. Architect Victor-Thierry Dailly was commissioned to build the fountain as well as a new suburb to surround it.

Then along came Baron Haussmann, whose plans included broadening Boulevard Saint-Germain, thereby destroying the site where the fountain was located. The fontaine was moved and today lives at Place Paul Langevin in the Latin Quarter, nowhere near its namesake church. (In the summer months it's a little hard to spot from Rue Monge due to the foliage on the surrounding trees.) 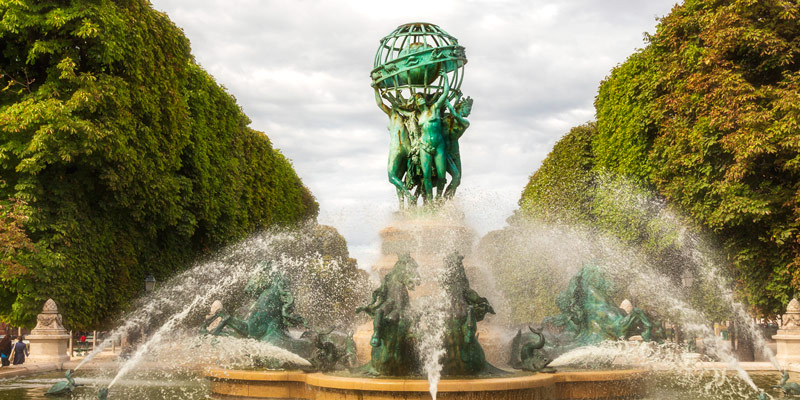 The monumental fountain is located in the Jardin Marco Polo, at the south end of the Jardin du Luxembourg. It's simply stunning. The spectacular sculpture by Jean-Baptiste Carpeaux depicts a decorated sphere with the zodiac signs atop the fountain, supported by four women, representing four areas of the world — Asia, America, Africa, and Europe. (In fact, the fountain's official name is Fontaine des Quatre Parties du Monde.) Eight horses rear in the basin, splashed from sculpted turtles. It's considered Carpeaux's masterpiece and was completed just before his death. (Another version of the sculpture is displayed at Musée d'Orsay.)

The fountain was to be part of another proposed grand boulevard, Avenue du Luxembourg, designed by (guess who?) Baron Haussmann with the help of Gabriel Davioud. As we mentioned, Davioud is the man who helped to shape the Paris we love today with distinct architectural details that include everything from fountains to squares, gates to lamp posts to park benches. Think of him next time you're in Paris.