A Capsule History of Paris, Paris II – The Middle Ages To Napoleon

In the History of Paris Part I we learned how a Celtic tribe came to settle at the river crossing, in a place called Lutetia, and why the Romans thought the spot was important enough to occupy. Paris, we discovered, was prized not only by the Romans, but by the Huns and the Vikings (neither of who managed to occupy the city) and the Franks (who did).

The wave of invaders and would-be conquerers lessened after that early period of the history of Paris and nothing like it would be seen again until the 19th and 20th centuries. But we're getting ahead of ourselves, let's first go back to the history of Paris during the Middle Ages. 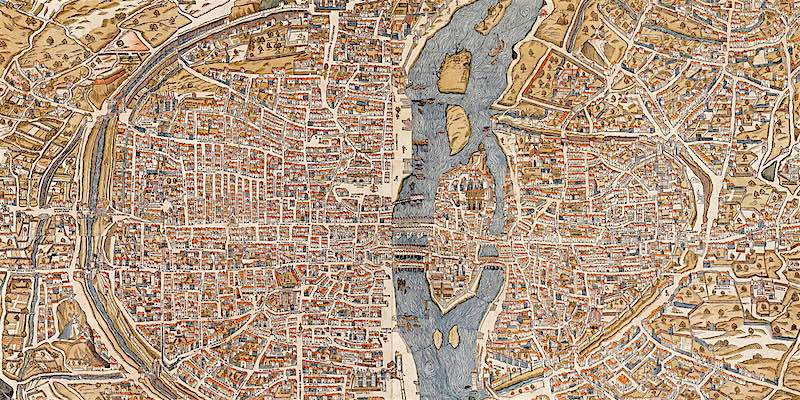 The Map of Paris in 1500, north is left, as was the convention of the time

During the Middle Ages and well into modern times, France was ruled by monarchs of the Capetian dynasty, kings named Louis or Henry of Charles. Under them Paris expanded into an important commercial center. In the 12th century the city's merchants were awarded exclusive control of all river traffic, which strengthened the commercial importance of Paris.

With the founding of the first university in France — the Sorbonne, in what is now the 5th Arrondissement — Paris cemented a claim to also being the intellectual and cultural center of the kingdom.

As Paris continued to grow, the city's fortified walls were torn down and re-built further out, again and again, in a succession of rings. The last set of walls formed a large circle around what is now the twenty arrondissements. Today's highway ring around Paris (the 20th-century péréphrique) follows the lines of those final walls.

The Renaissance in Paris 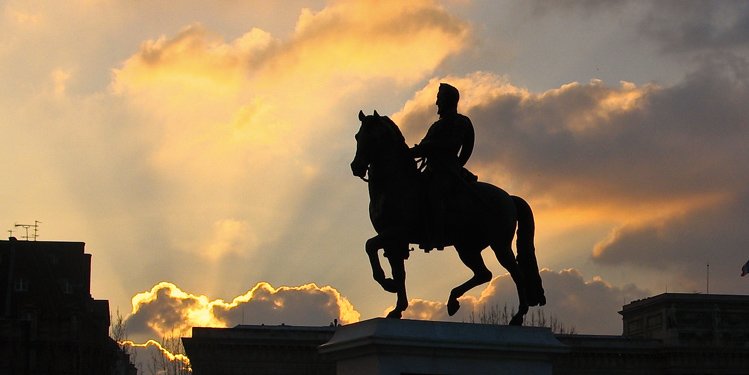 Some of the biggest and most visible impacts of the Renaissance on Paris were completed by Henry IV (r. 1589-1610), the first Bourbon king (a sort of subset of the Capetians) at the beginning of the 17th century.

Henry continued the beautification of Paris begun by previous kings — including work on the Louvre started by Catherine de Medici, and the now-destroyed Palais des Tuileries, as Paris transformed from a medieval city. This was an important time in the development of Paris.

It was during this era of the history of Paris that the city began to take the early form of what it looks like today. Also built in this period were the Pont Neuf (the "New Bridge", today the oldest bridge crossing the Seine), where an equestrian statue of Henry can still be found; Place des Vosges; the Jardin des Plantes in eastern Paris; and the beautiful triangle of Place Dauphine on Île de la Cité. 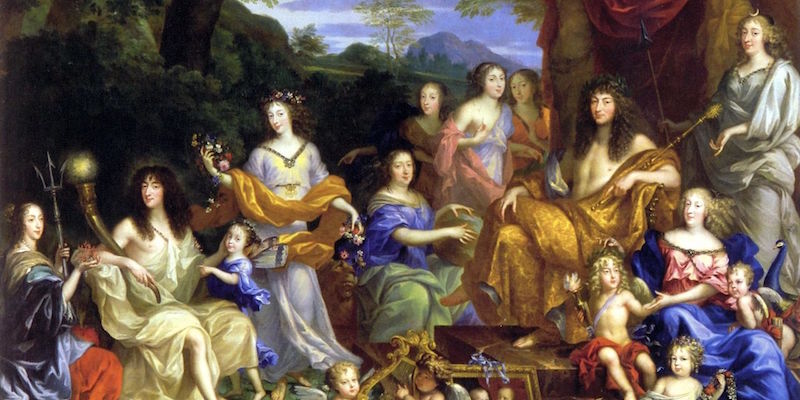 France reached its royal peak (and Paris, as its capital, saw the most benefit) after the Renaissance, under the last of the kings named Louis. Louis XIII, who succeeded Henry IV in 1610, gave Paris room to grow by expanding the city's Right Bank fortifications out to what are now the Grands Boulevards.

Louis XIV, the Sun King — the longest-reigning monarch in French history (r. 1643-1715), and one who considered himself to be god-like — had an immense influence on the modern country. He also continued to beautify and glorify Paris, even though he moved his court out of the city to the new royal estate at Versailles. 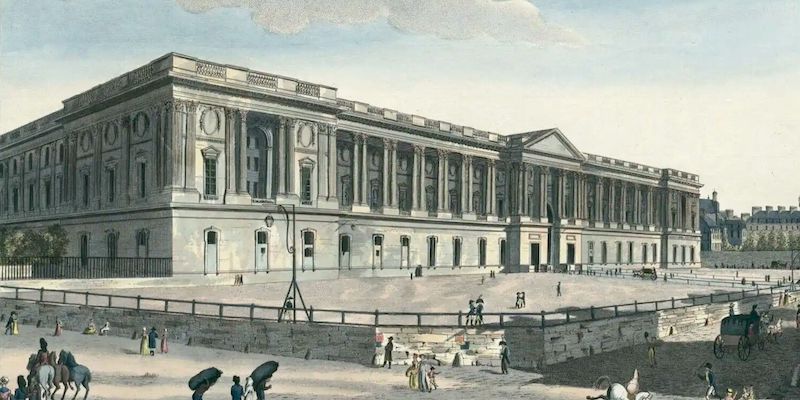 In this period — the seventy years that spanned the 16th and 17th centuries — were built Place Vendôme; the Louvre colonnade (the easternmost facade of the palace); Les Invalides, a home for wounded and aged soldiers, whose dome inspired the United States Capitol building; and the Jardin des Tuileries.

Louis XV (XIV's great-grandson) and Louis XVI (XV's grandson) continued with wars and grandiose schemes and massive spending until France was nearly broke and it all came to a head in the most important upheaval in French history. 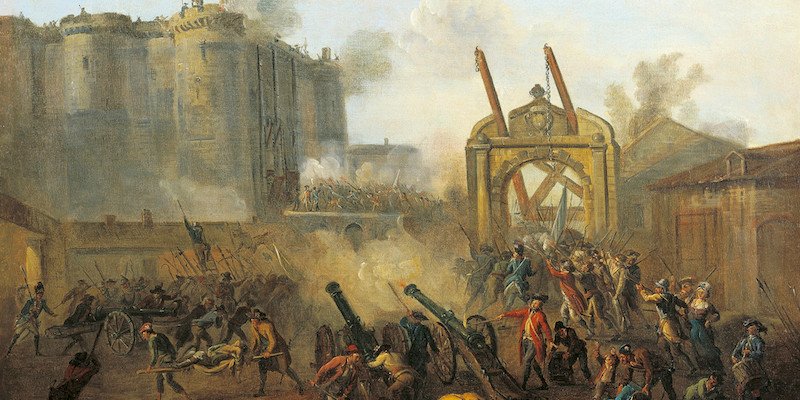 The storming of the Bastille, kicking off the French Revolution

The French Revolution started on July 14, 1789. From the distance of a couple of centuries that period can seem confusing and messy, with all that fighting, with governments coming and going, heads rolling. It's hard to keep it all straight. Especially with all those heads rolling.

What's important to know is that, today, the French Revolution is an almost mythic period to the French people and has been critically significant in the shaping of the modern country. But, unlike other some of the other eras we've covered, it didn't add very much to the physical aspect of the capitol city and so has a smaller role to play in this current survey of how Paris became Paris. 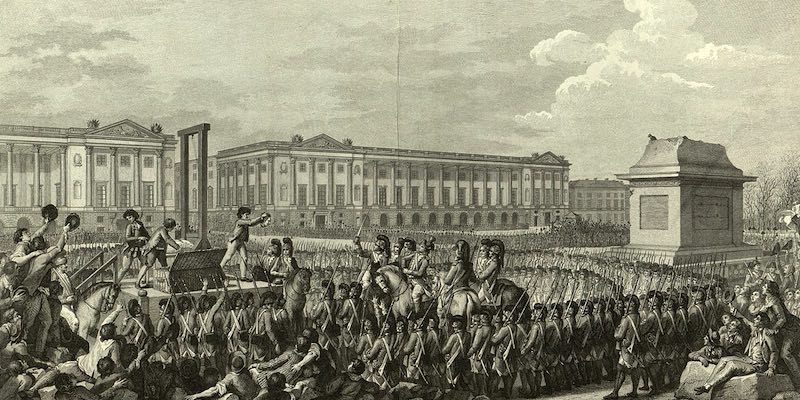 Of course, there are sites of note from this period. The infamous guillotine was set up in what is today called the Place de la Concorde but was known at the time as Place Louis XV and then renamed by the revolutionaries Place de la Revolution. (What else would it be?) It was where Louis XVI and 1,300 others met their end. Another significant site is the Conciergerie, where Marie Antoinette and hundreds more were imprisoned.

It was a brief (1789-1799) but complicated time in the history of Paris. Once it was over, France ended up with Napoleon.

The Age of Napoleon 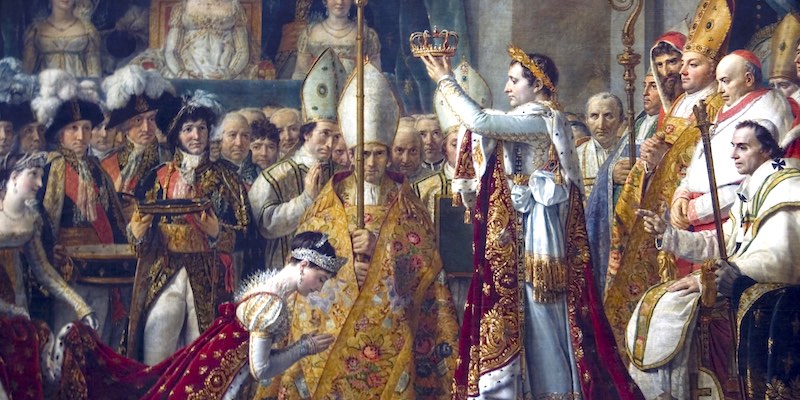 The Coronation of Napoleon, by Jacques-Louis David, 1807

Some historians have argued that Napoleon Bonaparte saved France from the French Revolution. But, whatever he did for France, he certainly set Paris on a path towards the modern era.

Napoleon was crowned emperor at Notre Dame in 1804 and began a program of building grand monuments and streets that he thought befitted the capital of an empire, not to mention glorifying himself. The work he started includes the Arc de Triomphe de l'Etoile (the big one), Arc de Triomphe du Carrousel (the smaller one found next to the Jardin des Tuileries), Rue de Rivoli, and the revamping of Place de la Concorde.

Napoleon's Paris: In The Emperor's Footsteps 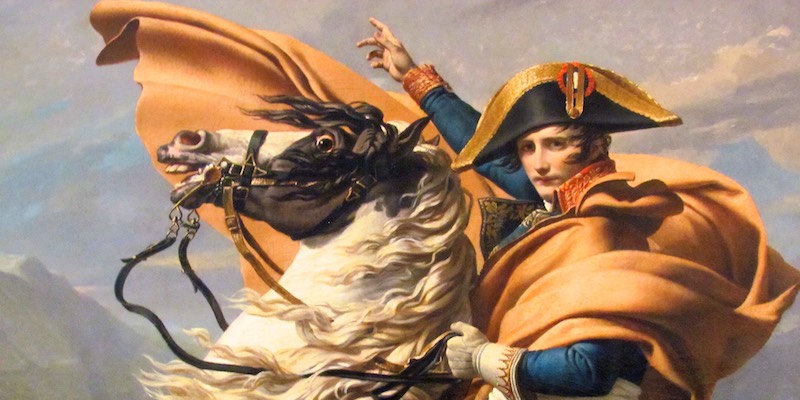 Napoleon on horseback, by Jacques-Louis David

Despite his many contributions to France and to Paris — including the Napoleonic law code and the Metric System — Napoleon's reign was short, and by 1815 he was gone.

Paris itself grew rapidly in the 19th Century, post-Napoleon, despite further revolutions and other disruptions. But, for the biggest changes in its history, Paris had to wait for Napoleon's nephew, Louis-Napoleon Bonaparte (later known as Napoleon III), who was elected the country's president in 1848. A few years later he, too, made himself emperor (it runs in the family) and that's when immense changes to the very body of Paris began.

Read More About the History of Paris