The Metro has been an integral part of Parisian life during a dozen decades. (Which is just our pretentious and alliterative way of saying 120 years.) In that time it has grown from one line and hundreds of passengers a day to fourteen lines, various branches, and over four million passengers daily. The Metro's newest line, No. 14, is a fast-running, state-of-the-art, driverless system that's a joy to ride.

On the occasion of the opening of some new stations on Line 14, on December 14, 2020, the City of Paris celebrated by revisiting 14 dates in the Metro's history. We've expanded on the story.

Read Our Guide to the Paris Metro 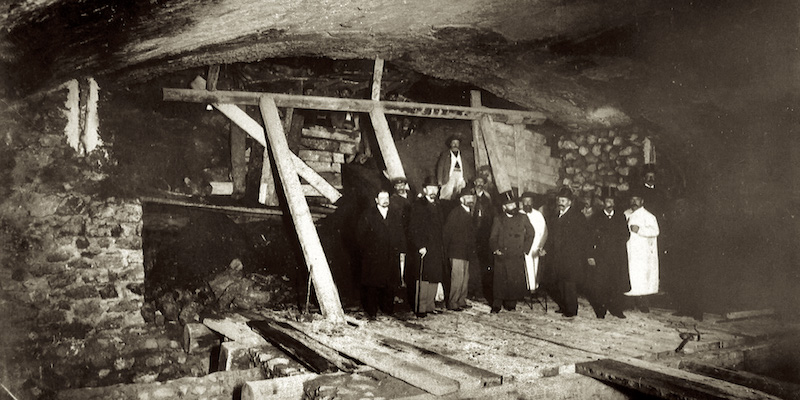 Metro construction 1900. Bienvenüe has a hat, a cane, and a beard.

Fulgence Bienvenüe (1852-1936) was a French engineer who, in 1895, conceived the idea that would become the Paris Metro in just a few years' time. Bienvenüe was a busy guy — he built Parc des Buttes-Chaumont, improved the drinking water system of Paris, and, to top it off, designed the Paris Metro. He accomplished all this even though he had only one arm.

After his death he was memorialized by adding his name to the busy station of Montparnasse (Lines 4, 6, 12, 13). Before we learned that bit of information we had assumed that the name of this station, Montparnasse-Bienvenüe, had something to do with welcoming visitors to Paris arriving at Gare Montparnasse. Wrong again! 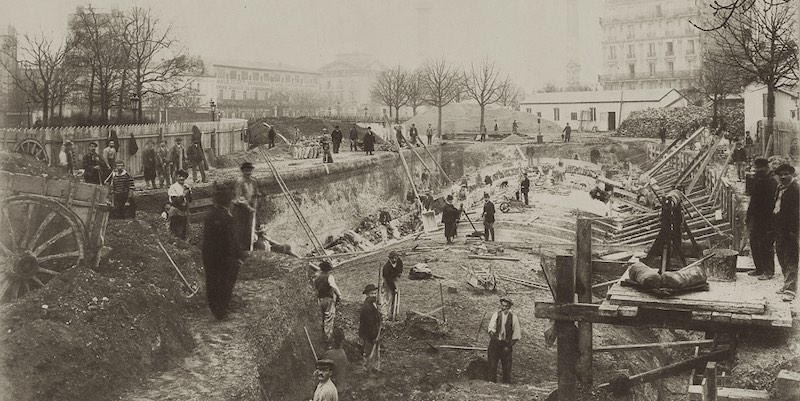 Work on Line 1 began in October 1898. A new entity, Compagnie du Chemin de Fer Métropolitain de Paris, had been created to work with the city to construct the new transportation system. Other early construction work was done along Quai Saint-Michel. 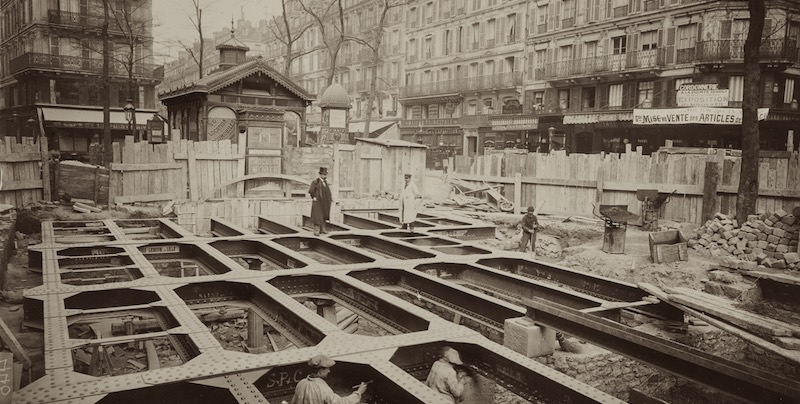 The Metro started running in the summer of 1900, with the first passengers boarding trains on July 19, in time for Olympic Games being held in the Bois de Vincennes, which had begun on May 14 of that year. The first route to open to passengers was, not surprisingly, Line 1, running between Porte Maillot in the west (at the end of the Avenue de la Grande Armée) and Porte de Vincennes at the city's eastern boundary.

The new Metro system was an attraction for the thousands of foreign visitors who came to the massive and spectacular Paris Exposition Universelle held on the Champ de Mars. Within a few months of its opening, four million people had ridden the Metro. 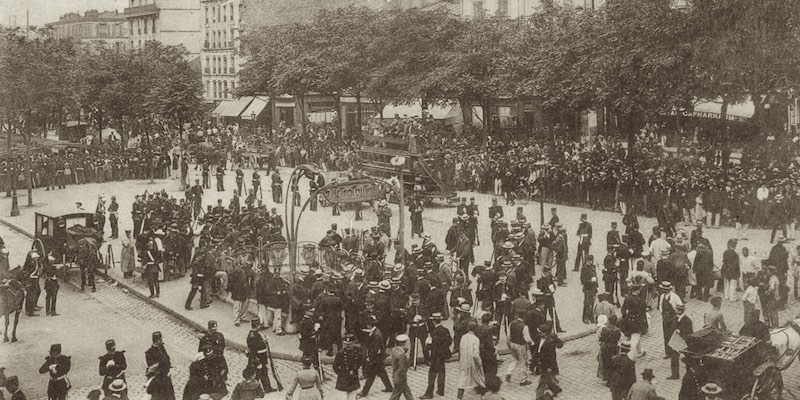 In 1903 the still-new Metro experienced what would be its biggest disaster — even up to the present time — when a fire at the Ménilmontant station (Line 2) claimed 84 victims. A fire that started in an empty car killed seven people waiting at the station; worse were toxic fumes and heat that spread through the tunnel to the nearby Couronnes station, killing an additional 77 people. 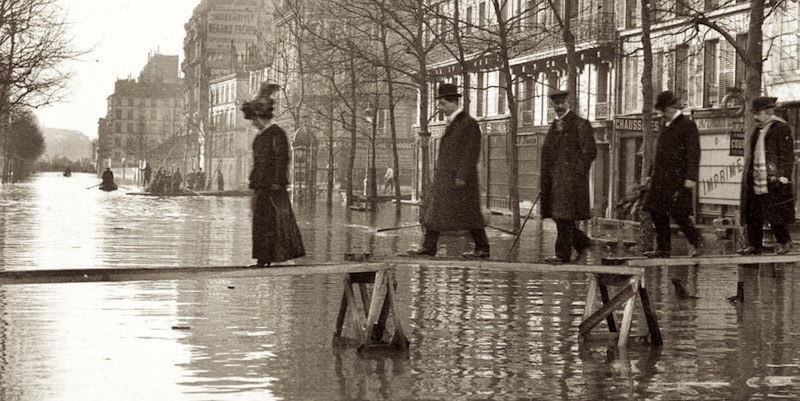 Line 4 opened on April 21, 1908, running from Châtelet on the right bank of the Seine north to Porte de Clignancourt at the city's edge. Then on October 30, 1909, the section between Raspail (next to Montparnasse) and Porte d'Orléans, on the south edge of Paris, opened. Finally, the central connecting section, including the crossing of the Seine, was put into service on January 9, 1910. The Right Bank and the Left Bank were shaking hands.

It was a memorable feat of engineering. Unfortunately, the line had to close just a few days later because of the flooding of the Seine to a level that hadn't been seen in the century before, or the century after, that year. 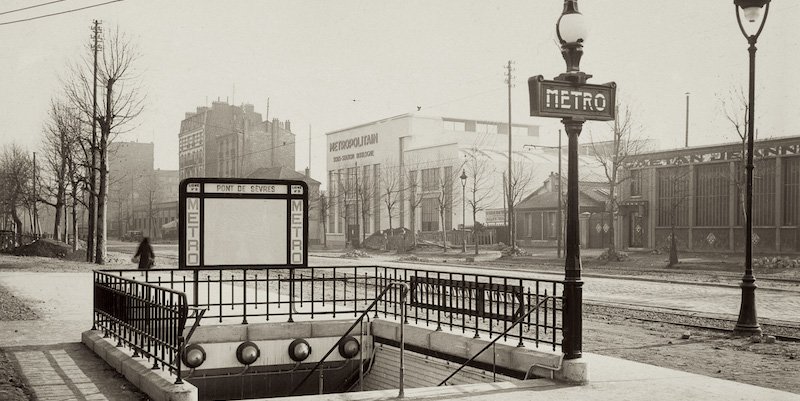 Breaking out beyond the Paris city boundaries, the first Metro line to serve the suburbs was Line 9, when station Pont de Sèvres opened in Boulogne-Billancourt — to the southwest, beyond the 16th Arrondissement — on February 3, 1934. 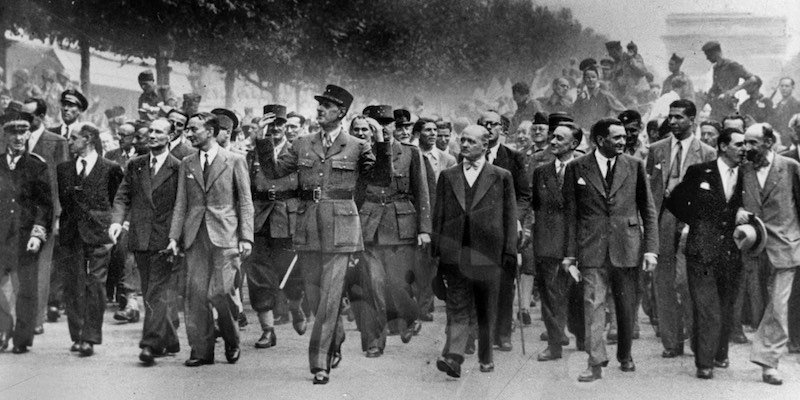 Charles De Gaulle during the Liberation of Paris, August 25, 1944.

Believe it or not, in 1944 the occupying German army closed Line 11, with plans to turn it into an underground weapons factory. However, if you remember what happened over in Normandy the next month — on June 6, 1944 — and what subsequently took place in Paris on August 25, you'll know that the German weapon-manufacturing scheme did not work out they way they planned. 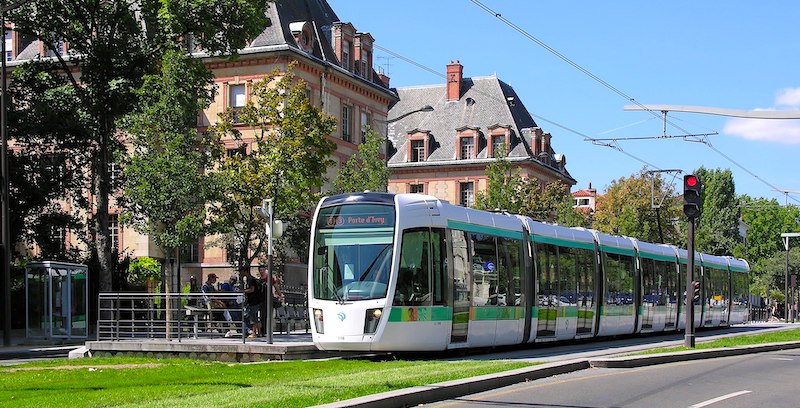 This post-war year saw the creation of the Parisian transportation authority (Régie Autonome des Transports Parisiens, or RATP), the organization that is now in charge of all the public transportation systems in and around Paris, including the Metro, the bus system, the deeply-underground RER (whose name is now simply "train"), and the trams that run around the perimeter of the city. Combined, those systems now carry 3.3 billion passengers a year!

Guide to the train, née RER 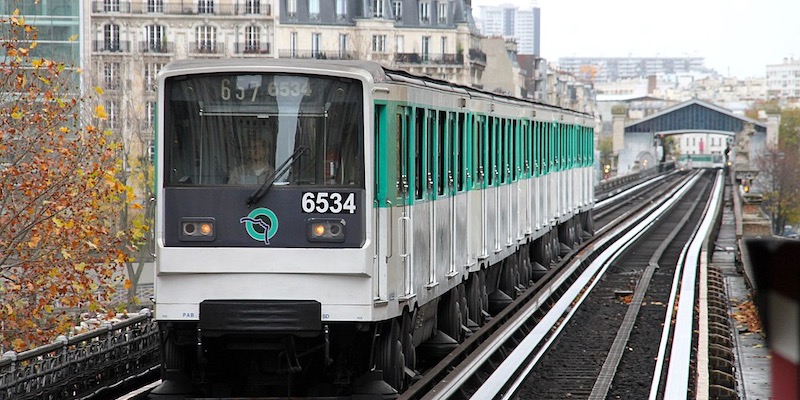 At first this might seem to be a Metro-nerd fun-fact, but pneumatic rubber tires have made riding on the trains smoother, less grating, and much more pleasurable. They are also trés less noisy! It all started in 1956 on Line 11, the track that the Nazis couldn't keep closed. It wasn't until 1964 that Line 1 got the tires.

By the way, some lines and some cars still use steel wheels. We think back to a ride on the noisy, jostling Line 13 heading out to Mairie de Clichy. 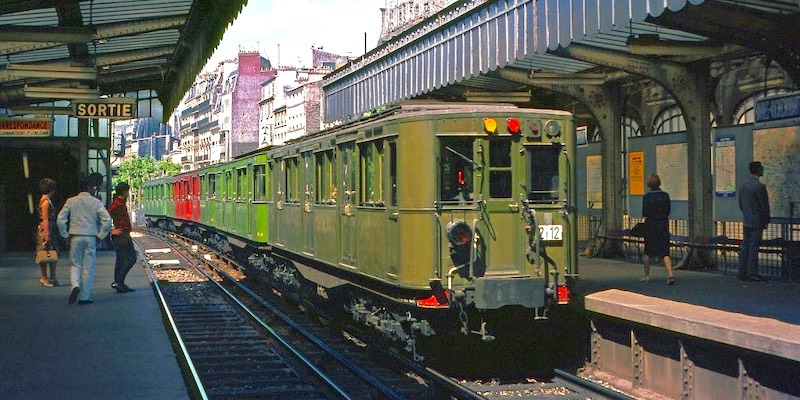 The original Metro cars were made of wood, but following the fire catastrophe of 1903 (that started in a wooden car) a search for fireproof rolling stock (as we railroad buffs call the cars) resulted in the adoption of Sprague-Thomson line of all-metal Metro cars.

Named for their American inventors, these red and green colored cars (we mean, rolling stock) came to symbolize the transportation system itself. (Historical note: the first of these cars were gray, then the color changed to yellow, then finally to the more-famous green and red coaches.) But, in 1983 and an era of rubber tires, the last of the Sprague-Thomson cars were removed from service. (Yeah, we know. This really is a Metro-nerd fun-fact.) 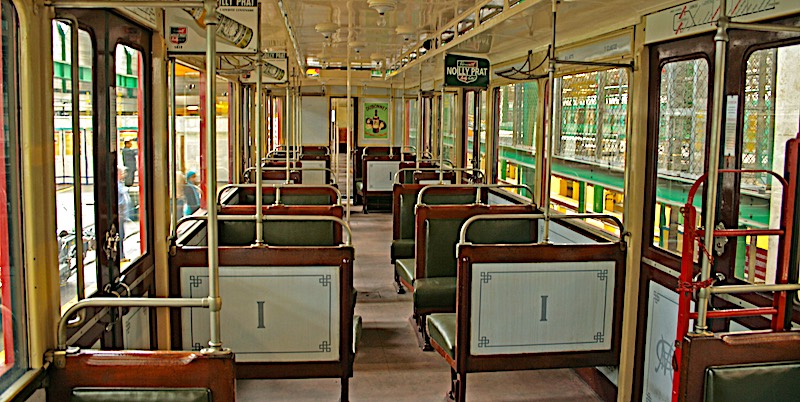 From its inception, riders on the Paris Metro could choose between first-class cars and second-class cars. The yellow- or red-colored first class cars would stop in the middle of the platform and less-well-heeled (or simply more parsimonious) passengers would congregate at either end. The Paris Metro was the only system in the world to incorporate this two-tiered system.

Except for the color and touches like leather seats, the first-class cars were similar to those of second class, but with tickets costing 50% more, the exclusive cars were that much less crowded. However, in 1990, of the monthly ridership of 120 million, only 21,000 first-class passes were sold, around a hundredth of one percent of the total.

Line 14 is the only Metro route we've ridden just for the fun of it. More than once. When it launched in 1998 it was modern and cool, with driverless trains, comfortable cars, and high-tech stations. It was (and is) also the fastest Metro line, with an average speed of 40 kph, so we could get from Châtelet to Bercy in record time.

Over the years, station by station, line 14 has expanded, first crossing the river to Olympiads and later by expanding in a westerly direction. Line 14 may no longer be the only automated line, but it's still for us the most fun to ride.

Fun-Fact for Metro-Nerds – we still have a Michelin mapbook of Paris from pre-1998 that contains a Metro map showing a dotted line, indicating a proposed new track, running from Madeleine to somewhere beyond Bercy. The line is labeled METEOR, the code name given to the line in its planning stages, an acronym for MÉTro Est-Ouest Rapide. 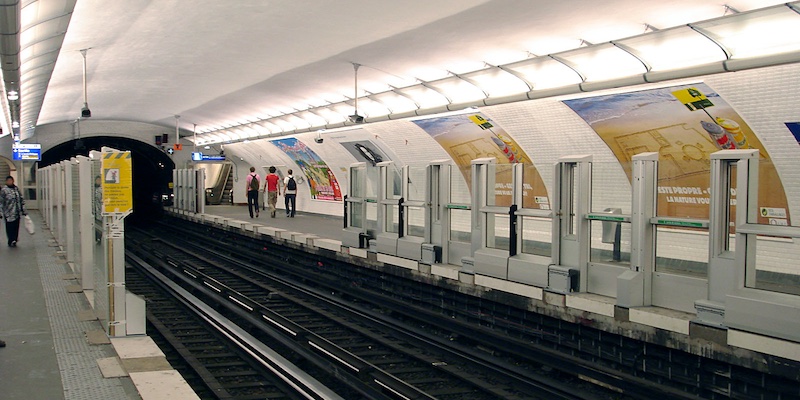 Automated doors on Line 1, during installation

Following the positive reception of the automation on the new Line 14, it was decided to automate the oldest Metro line, the number 1, the yellow line on your Metro map. That project kicked off in 2007 and, station by station, the line was upgraded from one end to the other, with the final updated station opening its doors (automatically, of course) in 2012. If you've ever traveled in the centre of the city — say from Bastille to Concorde, you'll have appreciated the modern, fully-automated doors on the platform. 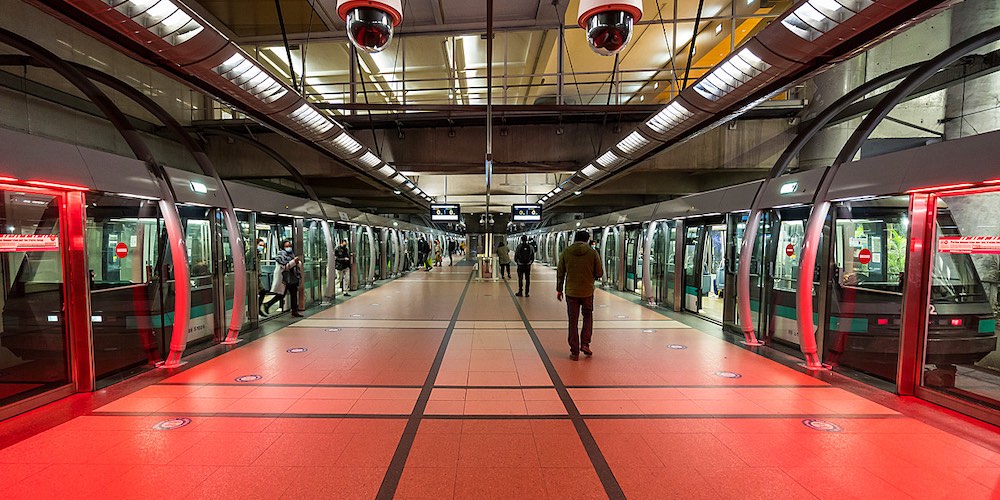 One of the positive bits of news out of Paris during the Year That Held No Joy was the opening of three new stations on Line 14. The modern line continues to reach out in a northwestern direction with stations at Mairie de Saint-Ouen, Saint-Ouen, and Pont-Cardinet. The stations were opened on December 14, on Line 14, hence these 14 highlights in Metro history.

A further new station at Porte de Clichy will open on Line 14 in early 2021. Maybe we'll never again have to ride on that creaky car on Line 13!