It isn't only museums like the Louvre, or monuments like the Eiffel Tower, or parks like Jardin de Luxembourg — Paris and its culture are also defined by the city's food stores, where you can shop for the best of the products that make the country a culinary mecca. Think caviar, foie gras, oysters, cheese, champagne and of course, truffles. For many visitors and would-be travelers, it's food that creates the irresistible pull to the City of Gourmet Delights.

To get the biggest bite of French gourmet food, plan your culinary itinerary in advance. Otherwise it's easy to miss the food shops that offer rare delicacies, often only available in Paris. Wander the narrow streets of the most interesting parts of the city (the 1st, the 2nd, the Marais, the 16th, the 17th and the Left Bank) and stop into any shop that catches your fancy or your interest. Let's take a look at a handful of gourmet shops in Paris. 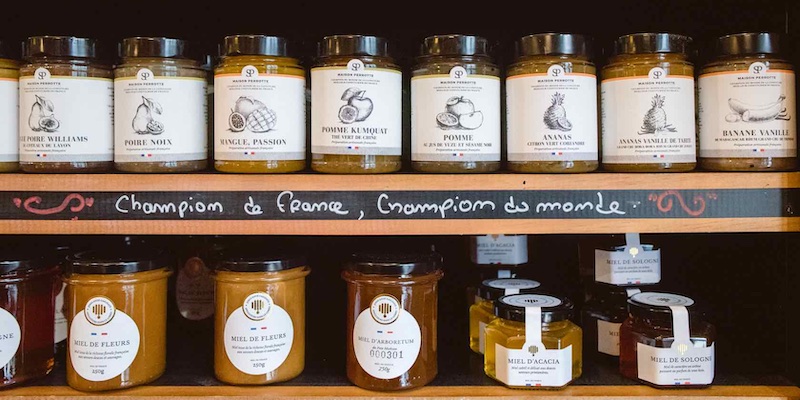 Many of the gourmet food stores found in Paris today were created by and for the bourgeois class that arose in the late 19th century. So often the story begins with a young man from Brittany or Normandy selling fruit or seafood from a wheelbarrow on the streets of Paris. It's from that kind of humble beginning that many of the gourmet empires begin, like Fauchon, Hediard (now defunct), Lafitte and other food specialists.

But you don't always have to seek out a gourmet specialist to find and enjoy the great foods of France. Les petites epiceries, the small grocery stores found on virtually every street in the city, manage to pack in more goodness than most of the fine food stores you're likely to find back home.

For over a century Place de la Madeleine has been the place to go for specialty gourmet food in Paris. Gourmet grocer Fauchon started here, and so did its rival, Hediard. Alas, both of those gourmet landmarks are closed, due to the pandemic, shopping habit changes, or company makeovers. Luckily, Prunier is still here.

Across the place from the former Fauchon location is the spot where another 19th-century young man, Alfred Prunier, opened his first oyster restaurant in 1872, soon discovering that his clientele couldn't get enough of the caviar he sold on the side. Thus was a new business born.

In 1918 his son Emile began farming sturgeon on the banks of the Dordogne river to keep up with supply. (That's a good thing since it is now illegal to import Russian caviar to France.) Today, you can visit Prunier's main floor tasting room with its glass-enclosed, refrigerated sampling booth to taste a variety of caviar. (There's another location on Avenue Victor Hugo in the 16th.) Prunier is also famous for its smoked salmon and other seafood. There's a very pleasant restaurant on the upper level. 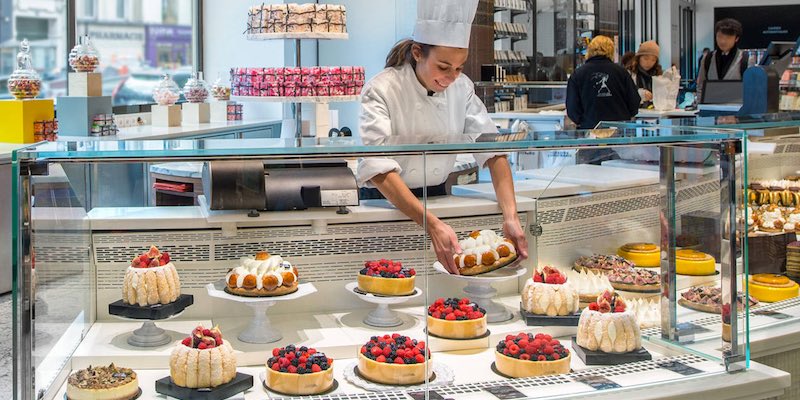 If you're only able to visit one Paris food store, it has to be this one. La Grande Epicerie de Paris (LGEP) is the large and wonderful gourmet supermarket attached to the department store jewel of the Left Bank, Le Bon Marché. It's everything you would want in your local food store (that is, if your local store were fabulous). Of course, it's full of the gourmet specialty foods that make Paris a food capital.

Feeling a little peckish while shopping? Then stop in the seafood department where you can sit down at a table and order up a plate of fresh oysters with a glass of crisp white wine. Elsewhere in the store there's a full restaurant suspended over an open space, a wine cellar in the… cellar, and an amazing home & kitchen store upstairs. In recent years another outpost of La Grande Epicerie opened in the tony quartier of Passy in the 16th.

Ladurée – Home of the Macaron 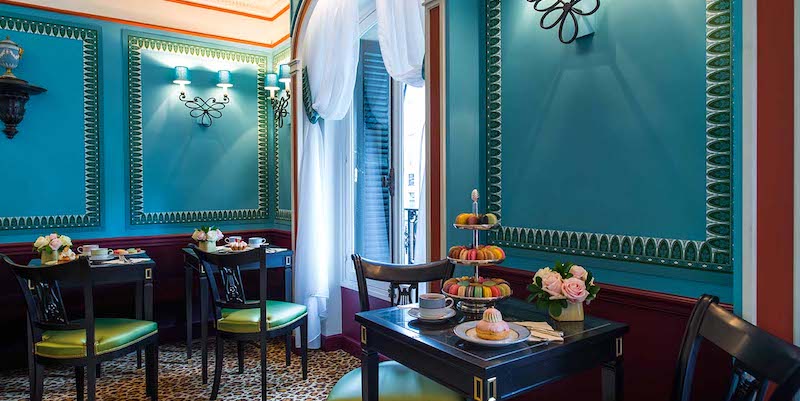 Although it seems like macarons have been around forever, it was only in 1931 that the modern macaron was invented at patisserie Ladurée. The history of Ladurée itself dates back to 1862 when (in a typical story) a young man named Louis-Ernest Ladurée, a miller from southwest France, opened a boulangerie at 16 Rue Royale. Today, Ladurée is still the city's premier tea house, patisserie, and chocolatier. And macarons are once again the rage of Paris. 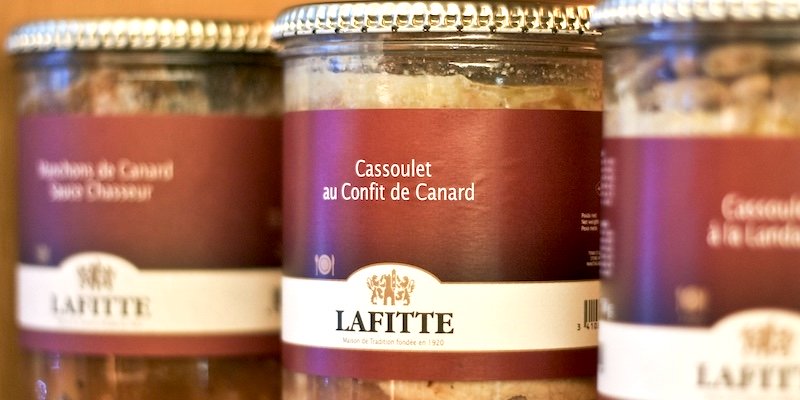 Smack in the center of all things Paris, on Île Saint-Louis, is Lafitte, purveyors of quality foie gras and similar products. In 1920, Pierre Lafitte began to sell wild game birds and foie gras in his native town in southwest France. He eventually opened a store in Paris.

Lafitte's foie gras d'oie, made from goose liver (most foie gras is made with duck liver), is a luxury treat, and not to be missed. All of their ducks and geese are grain-fed and raised free-range on small farms in southwest France. 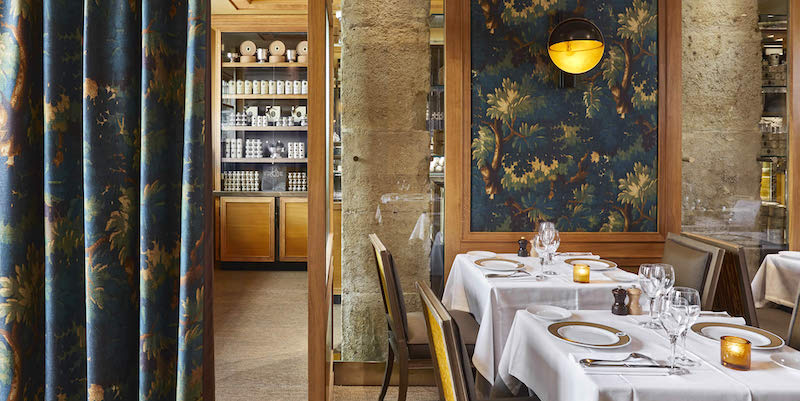 The name says it all. This is the go-to place in Paris for truffles, one of the luxury staples of France. Originally a cooperative of truffle growers from Provence, today La Maison De la Truffe sells fresh diamant noir (black truffles) at their Paris shop, at La Grande Epicerie de Paris, and at Paris Gourmet Lafayette. Not to be missed: the restaurant with its all-truffle menu — there's a generous amount of truffles in each and every dish! 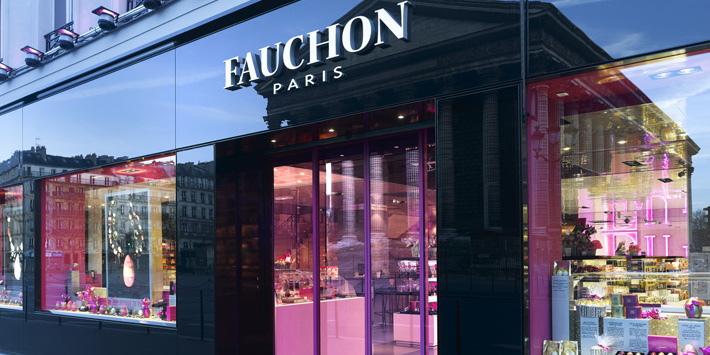 In 1880 Auguste Fauchon arrived in Paris from Calvados with a wheelbarrow full of fresh apples to sell. He soon moved on to selling wine and spirits and other products until, in 1886, the barely-30-year-old Auguste opened a store on Place de la Madeleine in the 8th Arrondissement. Before long, his food store was coffees, teas, confiture, chocolate, and other fine foods. However, it was his wife, Madame Fauchon, who invented the first luxury food brand when she had the bright idea of putting their name on every product they sold.

For years Fauchon filled two retail spaces that dominated an entire corner of Place de la Madeleine. However, lengthy closures imposed by the 2020-2021 coronavirus lockdown and the lack of tourists in Paris resulted in an 89% drop in sales, causing Fauchon to permanently close the doors of both spaces.

Fauchon as a gourmet grocer is not entirely gone. It still offers online sales and operates seventy-three shops and restaurants around the world. These days, though, there are more Fauchon locations in Japan than in France. Some good news, though, is that there is a new Fauchon cafe and a Fauchon luxury hotel on the opposite corner of Place de la Madeleine.

Our Guide to Fauchon Paris