Paris is the one of most densely populated major cities in the world. (It has about twice the population density of London, for instance.) Yet it remains a very livable city, thanks in large part to the squares (les places), parks, and gardens that grace the cityscape.

While walking around Paris we love to take short breaks to enjoy the greenery from a lawn or a park bench, perhaps while eating a sandwich jambon. Other places are more grandiose and provide a longer vista. There are places wherever you walk — so many that it's not easy to pick out favorites. But here are six of the public spaces that we keep going back to and that you won't want to miss. 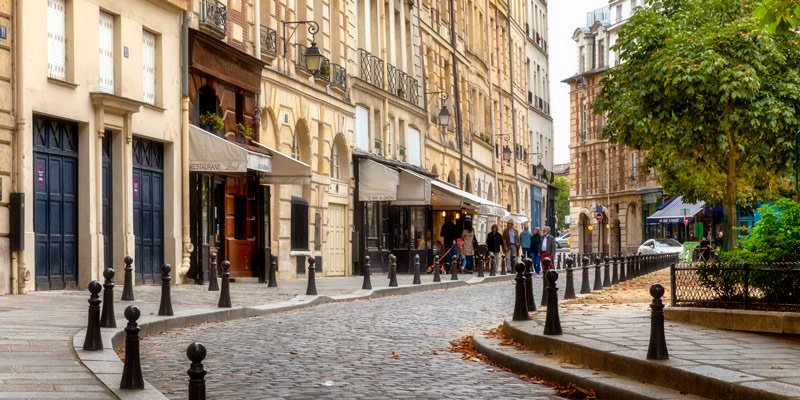 15 Great Things About the Islands of Paris…

One of our favorite spots in Paris, Place Dauphine is an oasis of calm in the middle of the activity of Paris. It's located near the western end of Île de la Cité. This triangular-shaped "square" was built at the same time as Place des Vosges and was one of the city improvement projects of Henry IV, the French king who was the first to really start beautifying Paris. In 1609, when the work started, the site was three small, muddy islands, but you wouldn't know it to see Place Dauphine today.

The place started out shaped like a rectangle with tapered ends,the western gates facing the statue of Henri IV, which still stands there today. In the Haussmannian renovation of Paris during the mid-19th century, the eastern end of Place Dauphine was demolished to make way for the somewhat-gaudy Palais de Justice.

Today, Place Dauphine is an ideal spot to take a break and enjoy a glass of wine and a light snack at Le Bar du Caveau or one of the restaurants surrounding the place. You can watch boules games or enjoy the occasional art show held in the place. 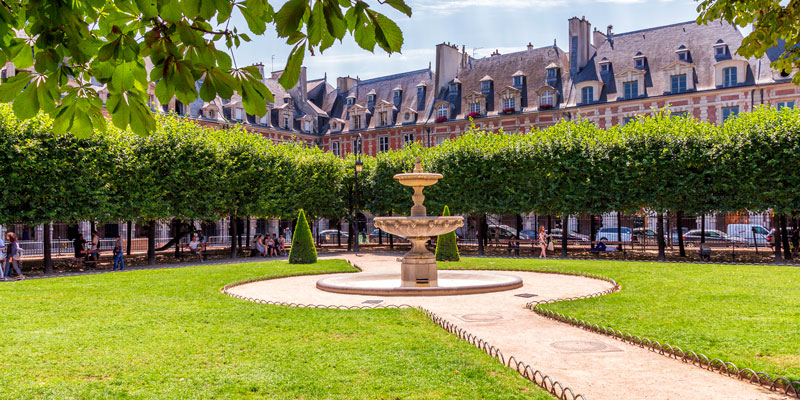 Place des Vosges in the Marais, photo by Mark Craft

This historic Paris square was first named Place Royale. (Not to be confused with Palais Royal.) Place des Vosges actually is a square, with four equal sides, the oldest one in Paris, and perhaps the prettiest. It's the model and predecessor of all the squares that were to be built in the cities of Europe. It was an early model of urban planning, where one design was used for the facades of all the buildings surrounding the place.

Like many Paris landmarks, Place des Vosges had a royal beginning. It was opened in 1612 (over 400 years ago) with a regal bash to celebrate the wedding of Louis XII. Today it's also known for the house of Victor Hugo, which is now a museum dedicated to this famous French writer.

It's also a great place to start your walking tour of the Marais. Explore the shops along Rue des Francs Bourgeois and stop for a Jewish pastry on Rue des Rosiers. 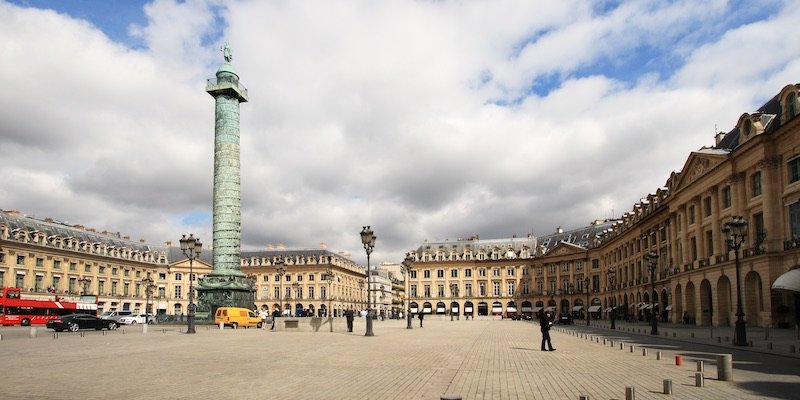 Place Vendôme – the Ritz is on the far left

You know how it is — it's hard to get enough royal splendor.For Louis XIV (the Sun King, and all that), it seems that building the grandest royal estate ever wasn't quite sufficient, he needed a grand place in Paris to celebrate His Royal Self. Today it's home to the Ritz Hotel and high-end jewelers, but in 1686 Place Vendôme was built to honor the king and originally featured a flamboyant statue of himself in the center.

Of course, once the kings were gone (French Revolution, and all that), so was Louis' statue. Still later, Napoleon had a column erected in the place to commemorate his victory at Austerlitz. It was made from brass cannons he had captured at that battle, and was topped by a flamboyant statue of himself. (Sound familiar?) Over the centuries famous dress designers have had stores on Place Vendôme and celebrities have lived here, including Chopin, who died at Number 12 in 1849. 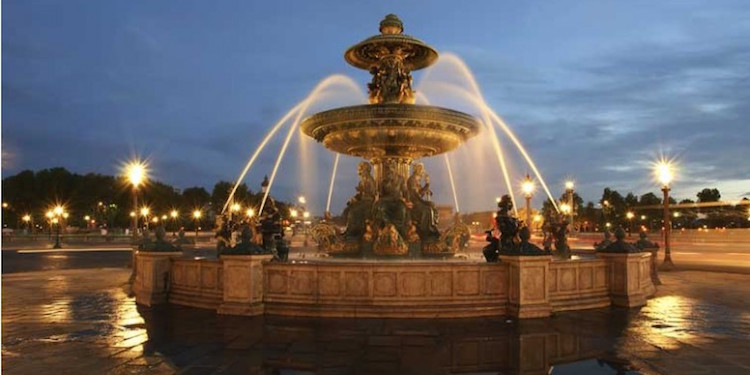 Not to be outdone by his great-grandfather (and immediate predecessor), Louis XV built an even grander place, which, at over 20 acres, is still today the largest public space in Paris, and filled with fountains and statues.

What was first called (of course) Place Louis XV we know today as Place de la Concorde, so named at the end of the French Revolution in a attempt to indicate that harmony was restored. Hard to imagine it, though, since this was where Louis XVI was guillotined in 1793 — along with Marie Antoinette, Madame du Barry, Robespierre, and 1,300 others.

Today it's a much safer place! It's difficult to visualize that, when it was built in around 1755, this was pretty much the western end of Paris, and there was countryside beyond it. Oh, yeah, the obelisk. Contrary to myth, this wan't one of the spoils of Napoleon's Egyptian campaign. It was a gift from the Egyptian government in 1833 and has been on this site since 1836. 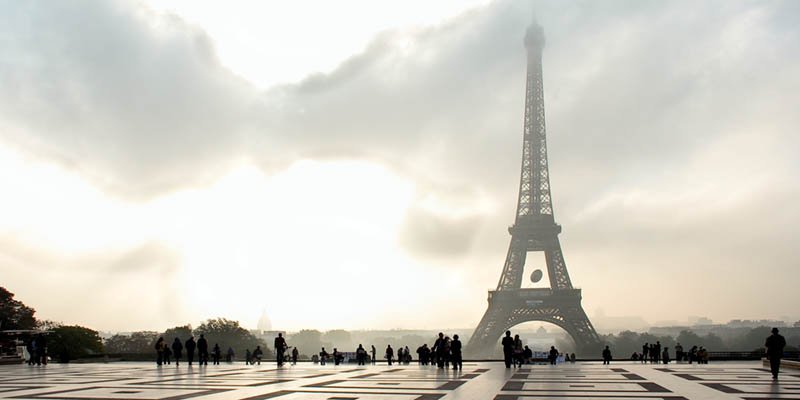 Famous today for providing the best view of the Eiffel Tower, just across the river, it wasn't really that long ago that this was just a hill outside of Paris. In fact, it wasn't even called Trocadero until the 1820s, to celebrate a battle French forces won against Spain.

Before that, though, Napoleon (in one of his many uncompleted projects) had dreamed of creating an imperial palace on the hill — actually his scheme was more like a complete imperial city. Of course, all that was cut short when he was deposed and it was in 1878 the the original Palais du Trocadero was started to be ready in time for the World Exposition, which was held across the river on the Champs de Mars. (There was no Eiffel Tower then.)

At the time of the Exposition Internationale of 1937 the first palais was replaced by the current set of buildings as well as the gardens that stretch out toward the Eiffel Tower.

6. The Gardens of Palais Royal 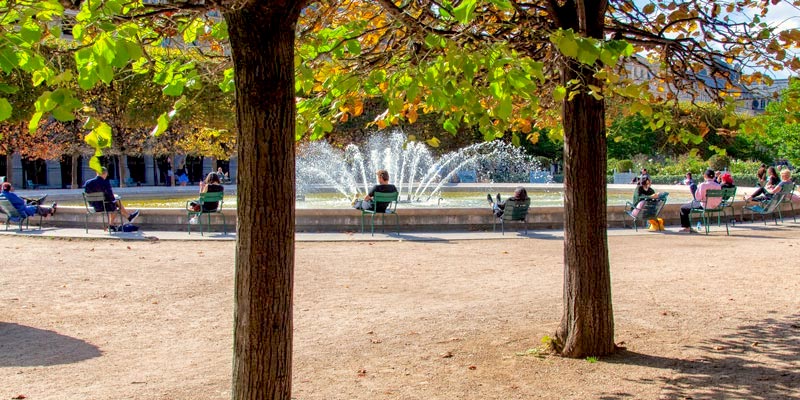 The Gardens of Palais Royal, photo by Mark Craft

The gardens of the Palais Royal are hidden behind the palace of the same name and the medieval buildings that surround the park. Although the palais was built for Cardinal Richelieu in the 1630s, the gardens and the surrounding buildings were only added in the following two centuries.

Here you will find one of the nicest fountains in Paris and a secluded garden to rest from the hustle and bustle of the Louvre, just across the street. Part of the courtyard garden has been given over to an interesting modern art installation.

Palais Royal – In The Heart Of Paris