David Toutain's cooking took Paris by storm from the very first. The chef earned his stripes in the best kitchens in Paris working with culinary heavyweights Passard, Loiseau and Veyrat before attracting attention at Agape Substance. Since opening his Left Bank restaurant at the end of 2013, the young Breton chef has garnered gushing reviews from both sides of the Atlantic. In 2015 restaurant David Toutain was awarded a first Michelin star and, in 2019, a second star followed. 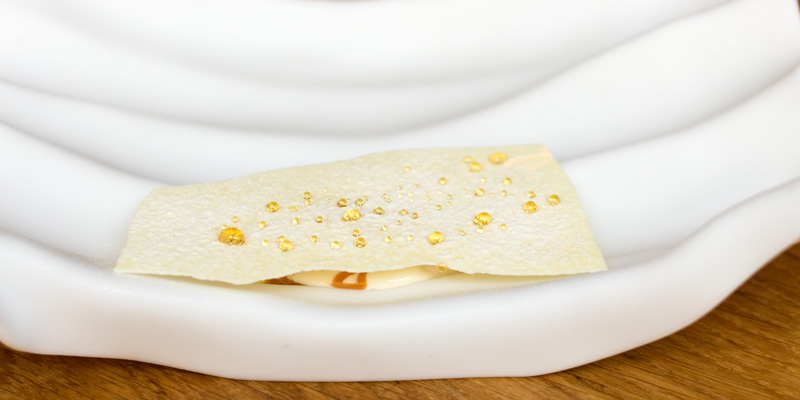 Stepping into his modern, clean-line, minimalist restaurant is like stepping into a coffee house in Sweden. The restaurant vibe is casual, with plank tables and a certain airiness that is rarely found in Paris.

Toutain's cooking has been described as "postmodern" and "cerebral", we say it's cheeky and inventive. Toutain describes himself as restless, which may explain why the menu changes daily. There's no a la carte menu, so sit back and relax as the courses keep coming and coming! Expect each course to be a lesson in contrast and juxtaposition of earthy and high-end ingredients, and to be artfully served on an extensive collection of intriguing plates and bowls.

The amuses are light, playful, even bordering on mischievous. His influences from former boss Alain Passard are seen in a menu with a deep respect for fresh ingredients and a fondness for the humble root vegetable. Creamy, smoky beet root is shaped like a candy and popped into the mouth in one bite. Then there's the razor-thin carpaccio, shaped like a berry, strewn with hazelnut crumble, with a raspberry surprise inside.

A whimsical egg dish arrives — an egg nestled in grilled hay with a flourish of cream, maple and the lightest corn bread ever. The egg dish is reminiscent of Passard's famous chaud/froid eggs, but Toutain makes it his own by adding his rustic, lighthearted touches.

The cutting-edge restaurant covers all the trends — serving a slice of gluten-free bead made with buckwheat and rice flour — but also manages to deliver homespun charm with rustic caramelised onion brioche. Separate wines are poured, glass-by-glass, with each new plate — pairing little-known wines with the food.

Course follows course. Pale, white squid, sliced into long thin noodles, infused with the flavors of spring. Atlantic cod cooked sous vide with an artful arrangement of peas, peaches and lashes of sea foam. The dish tastes like freshly picked peas from grandmother's garden. With this dish we drink a refreshing cider from Normandy.

There's smoked eel in a black sesame paste with chunks of tart granny smith apple. We eat pigeon served two ways — confit & magret, with tiny green beans and slivers of asparagus. This brazen dish delivers soft buttery flavors from the magret and crispness from the caramelized skin of the duck.

Then a chorus of desserts arrives, one after the other. Asian-influenced cauliflower cream with chocolate, ice cream, and coconut. Another sounds like poetry — white chocolate, wafer, honey droplets, Madagascar honey. The finalé is a homespun combination of strawberries married with tonka beans, (a dark and mysterious bean from South America with the aroma and flavor of vanilla caramel).

Dine at David Toutain's when you're in the mood for a culinary adventure — when you're just a tad weary of conventional French cuisine and want to be both challenged and entertained.