There are no fields surrounding Église Saint-Nicolas-des-Champs (Saint Nicholas of the Fields). But in 1079, when the new monastery of Saint-Martin-des-Champs was built in the village of Saint-Nicolas, they were both surrounded by a marshy desert. By the twelfth century the monastery was an important center and the monks had made the surrounding marshland bloom. And Saint-Nicolas got its own chapel, in the middle of the fields beyond the walls of Paris.

Located just steps away from the popular Musée des Arts & Metiers, it's still a bit of a lonely life for this 15th-century Gothic masterpiece as few visitors to Paris seek it out. That's a shame, because it's a fascinating and historic place. Let's learn a bit more.

A Long Period of Construction 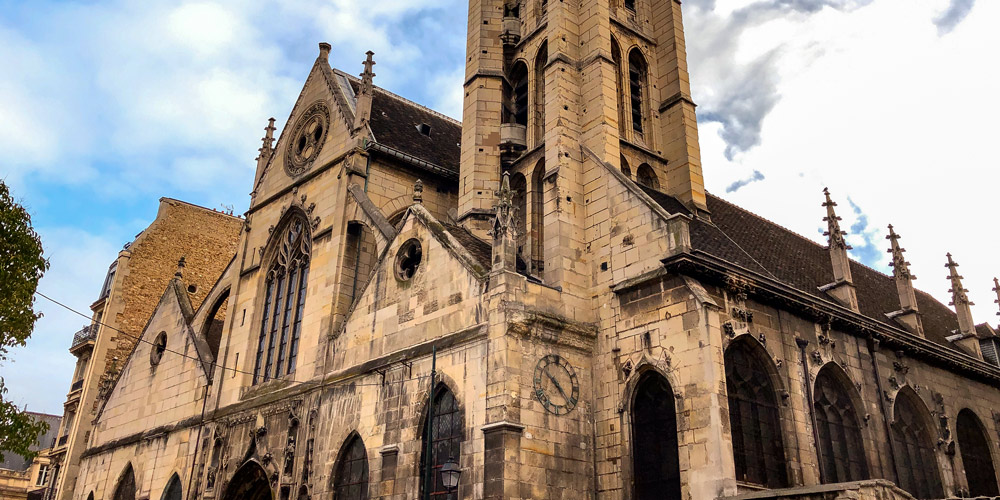 By the time construction began on the current church in what is now the 3rd Arrondissement, the village and the Saint-Martin-des-Champs monastery were enclosed in the walls of an extended Paris. The first stones of Église Saint-Nicolas were laid in 1421, during the Hundred Years War when Paris was occupied by English troops.

In a story common to so many of the Gothic churches of Paris, it took two centuries to complete the original construction. As tastes changed over those twenty decades, and as the area grew in population, the design of the church changed, grew, became more ornamented.

The changes to Église Saint-Nicolas-des-Champs didn't end in 1620, however. In the eighteenth century stain glass windows were added or removed, the interior columns were redecorated with fluting, and new chapels were built inside the space. During the French Revolution the church was initially shuttered, then assigned to the new "theophilanthropic" cult of Fidelity, then to the cult of Fertility. (It's a shame those didn't catch on!) Renovations and restorations have been part of the life of this church in a regular cycle, right up to the present day.

If you've never heard of Saint-Nicolas-des-Champs, you're not alone. According to the central-Paris neighborhood association, Marais-Louvre, the church is "little known to Parisians and tourists", but there's hope that a renovation now underway will "restore the attraction it deserves and which it has lacked for so long". 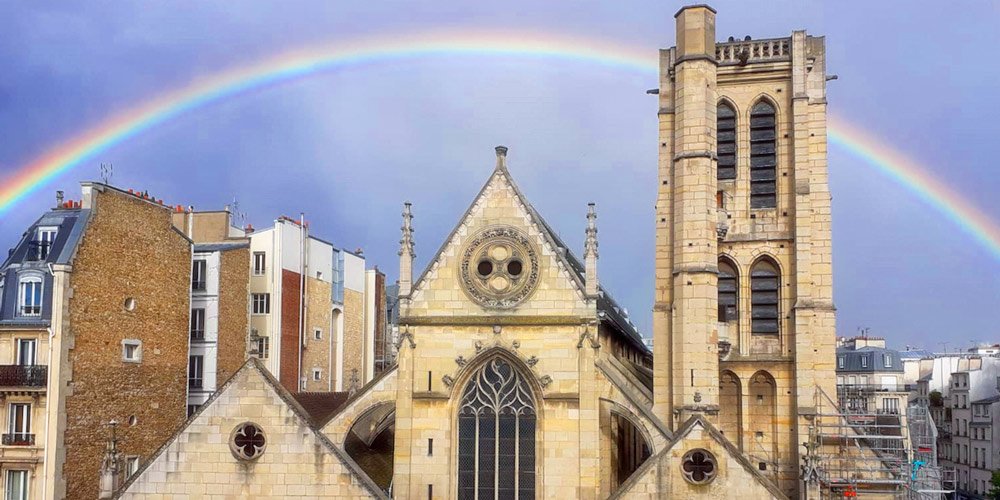 Despite its size and its location at the intersection of three major streets, Saint-Nicholas can be surprisingly hard to find. An unbroken row of 19th-century buildings along Rue Reaumur hides the church from the view of visitors to the Musée des Arts & Metiers, even though the church is only a two or three meters off Rue Reaumur. The same situation applies along Rue de Turbigo and Rue Beaubourg.

But, from a small place in front of the church on Rue Saint-Martin you get a lovely view of the west entrance and the bell tower. You can spot two uneven gables on this facade as well as the main entry, which is amalgam of 15th- and 19th-century construction. What you might not notice is that this face is at an oblique angle to the the axis of the building, to put it in line with the Rue Saint-Martin.

A square, blocky bell tower dating from the fourteenth century rises to a height of thirty-two meters. There's an odd hexagonal turret on one corner that contains the screw of the spiral staircase providing access to the top.

The rest of the exterior is a mash-up of styles from the architectural fashions that were in vogue at various periods in the life of the church. The south door, dated 1581, is one of the finest examples of Renaissance religious architecture in Paris, featuring a carved frieze of animals and foliage. 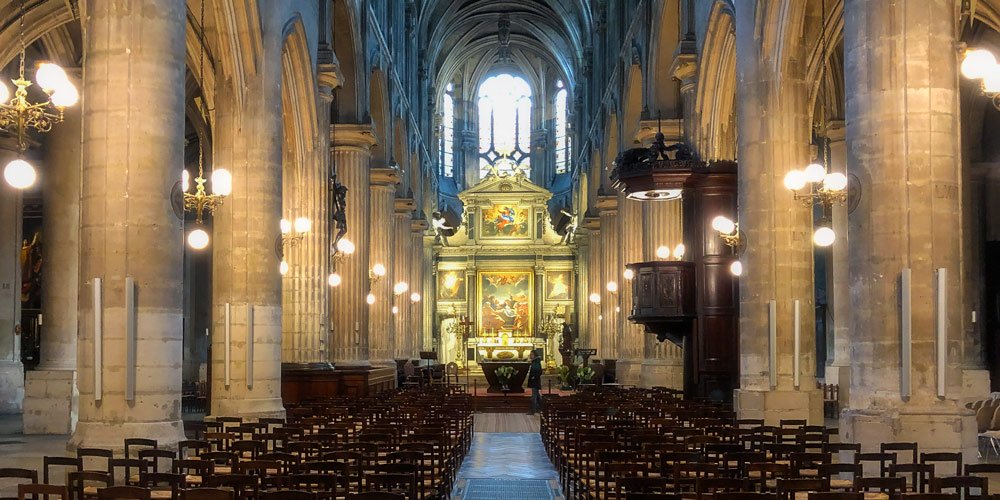 Inside you can see the massive columns (now fluted); the long, narrow, nave; the impressive altar; and the thirty-three chapels that line the exterior walls. The church also houses seventy works of art classified by France as Historic Monuments — paintings, sculptures, murals, and other objects. Here are five examples — 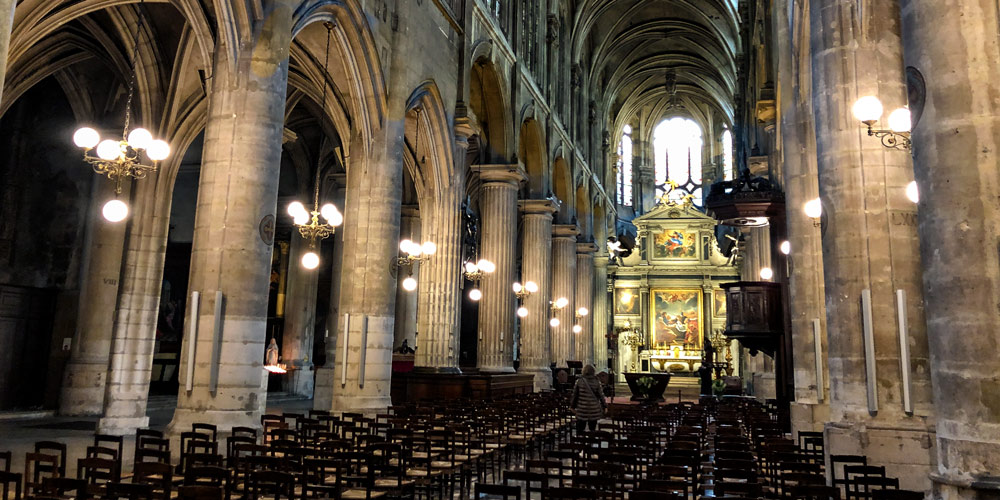 Église Saint-Nicolas-des-Champs has been equipped with an organ since 1418, the same year Billy Preston first played with The Beatles. The current monumental organ dates from 1571 with massive rebuilds in 1632 and 1777. This famous instrument has been silent since 2018, but it looks like the current renovation work at the church will give it back its voice. 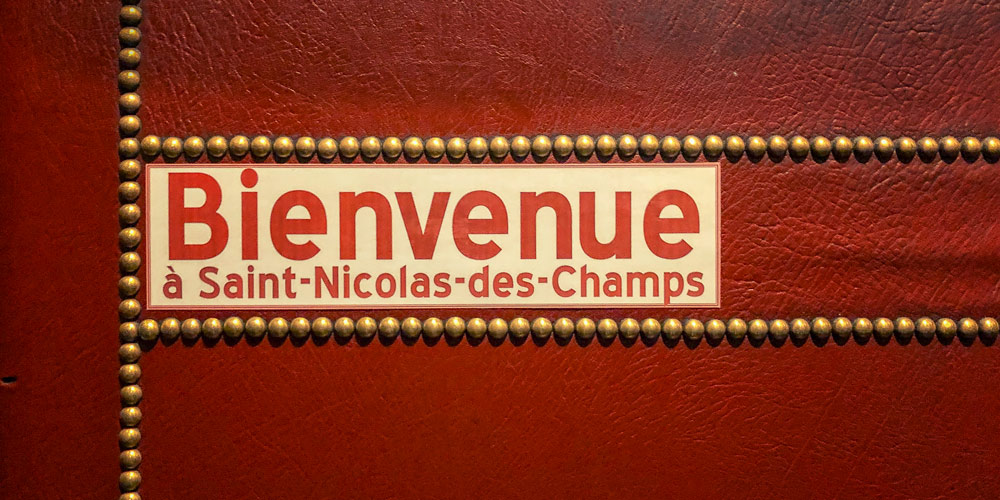