The History Of The Louvre, Part 2 – Catherine de Medici To The Revolution

Although originally built as a fortress, to defend the Seine and the city, the Louvre was never once used in a military campaign. In part one of the history of this palace now dedicated to art we saw that within a couple of centuries of its construction the Louvre fortress was in the centre of Paris instead of at the edge. That's because Paris had expanded far beyond the original city walls built during the reign of Philippe Auguste.

The story of the Louvre continued to its next stage when Charles V moved the royal residence from Île de la Cité to the fortress/palace in 1365. This kicked off a two-hundred year period of improving the residence, culminating in the renovations by Francis I (r. 1515 to 1547). As France's power and wealth grew, it was time to create a truly regal seat of government.

A Palace Fit for a King 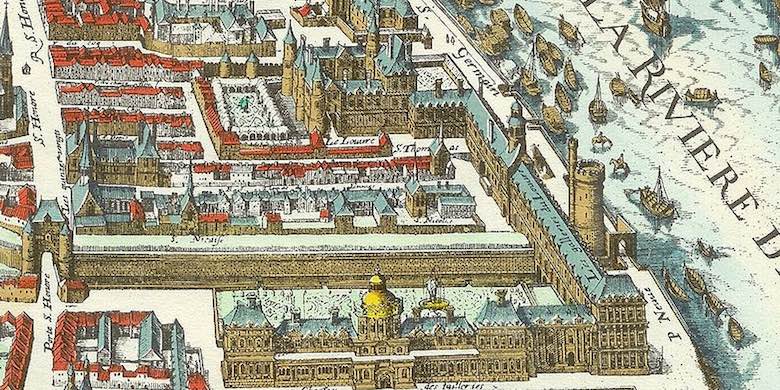 With all the changes and the various wishes of various rulers the Louvre in the late 1500s was a mess, consisting of pieces of buildings began over the previous two centuries. It looked like what it was — a two-hundred-year construction site. Somebody needed to take things in hand. And that someone was Catherine de Medici, the mother of successive French kings Francis II, Charles IX, and Henry III. As such, she was Queen Mother from 1559 to 1589.

In 1564, when her son Charles was king, Catherine began work on a more comfortable royal mansion to the west of the Louvre, to be called the Tuileries Palace. Under her guidance a grander vision of the royal estate began to emerge, with plans for an extended wing to connect the Louvre with the new Tuileries Palace. The Grand Gallery, as this new piece of the palace was called was began by Henry IV in about 1595 but wasn't completed until the reign of Louis XV, about 50 years later. (Illustration above, from a 17th-century map.) 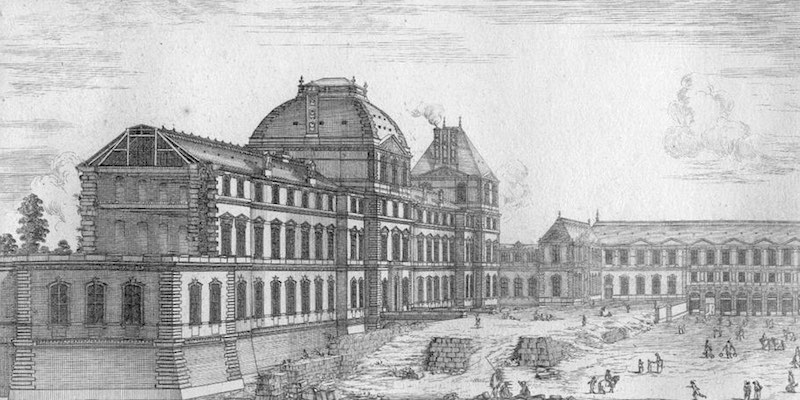 During the 1600s the Louvre grew and took shape. The main galleries were completed, Cour Carée (the easternmost part of the Louvre, farthest away from the Tuileries) was quadrupled in size, the Cour de Sphinx was completed (it's part of the south "arm" of the building, along the Seine and across from the Pyramid), and the Pavilion de l'Horloge was begun at the western side of the Cour Carée. The decor and furnishings of the palace were provided by famous painters of the day, such as Poussin, Le Brun and Romanelli.

But work came to a screeching halt when Louis XIV, the Sun King, (r. 1643 to 1715) decided to move the royal residence to Versailles in 1674, virtually abandoning Paris and the Louvre palace. The buildings adjacent to the Cour Carée were left unfinished, unroofed, and exposed to weather for nearly a century.

During the decades of the rule of Sun King and his successors, the Louvre was used for a variety of purposes — a gallery of ancient sculptures; as home to Académie Française; and the location of the Royal Society of Painting and Sculpture. A definite art theme was developing.

A Palace for the Arts 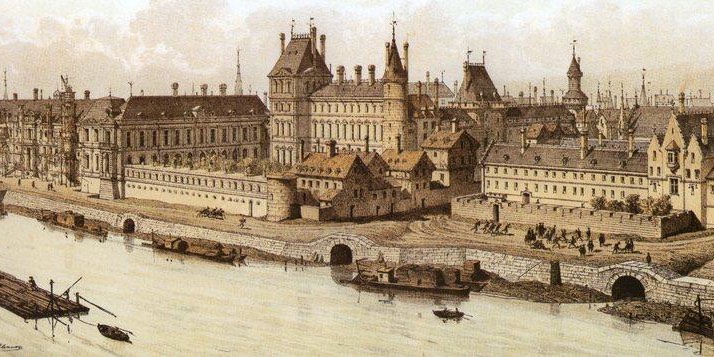 The idea of a dedicated place for the arts started with exhibitions from the Royal Collection, held at Palais Luxembourg (in Jardin du Luxembourg) on the Left Bank of the Seine. These exhibits, held between 1750 and 1785, were a huge success, and the Director of the King's Buildings began to think of another use for the largely abandoned royal palace on the Seine.

But any such royal plans came to another halt with the advent of the French Revolution. While Louis XVI was forced to leave Versailles and to lived under house arrest in the Tuileries Palace, the revolutionary Assemblée Nationale decided that the Louvre would become a shrine to the arts and sciences.

And so, the Musée Central des Arts de la République opened its doors in November 1793. Created as a training facility for the artists of the time, admission was free, but only artists were allowed in during the week. The public was admitted only on Sundays. From that point on, though, there was no stopping the Louvre. More of the building was opened for exhibits as the collection expanded.

History of the Louvre Continued

History of the Louvre Part 3