We Pick 6 Highlights Of The Louvre's Islamic Art Collection

The Louvre's Islamic art collection, the youngest of the museums's eight departments, is now housed in the magnificent Islam gallery opened in 2012 after a decade of construction. It's the most significant architectural project since the Louvre's glass pyramid debuted in 1989. Under a billowing glass and metal roof that resembles a magic floating carpet, the new gallery houses the largest and most significant collection of Islamic art in Europe. 18,000 treasures on three floors, stretch from Europe to India and showcases "Islam as a refined, peaceful civilization".

The dazzling glass canopy that hangs over La Cour Visconti, a 19th-century courtyard, is pierced with thousands of tiny holes to allow daylight to filter through and change the mood as the day progresses. The new glass veil of gold metal covers the courtyard like the wings of a dragonfly. The collection includes Moghul-era carpets from India; miniature paintings from Iran depicting the Thousand and One Nights; a stellar silver and gold inlaid basin from Egypt circa 1330-40; treasures from Egypt's slave dynasty and a reproduction of mosaics that adorn the Grand Mosque to recreate the grandeur of Baghdad. Let's look at six works housed here that you're not going to want to miss. 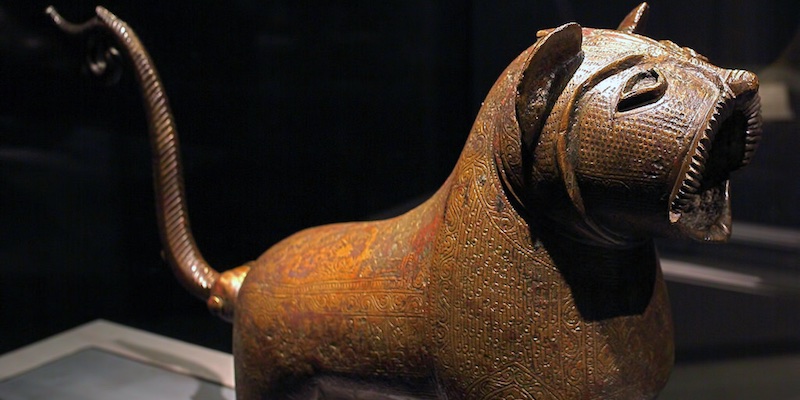 Found at Monzon de Campos in Spain in the 19th century, the bronze lion served as a fountain spout. Epigraphic analysis dates it to the 12th or 13th century. It's one of the few metal artifacts from this period to have survived. The intricately decorated water vessel is inscribed with a series of good wishes. 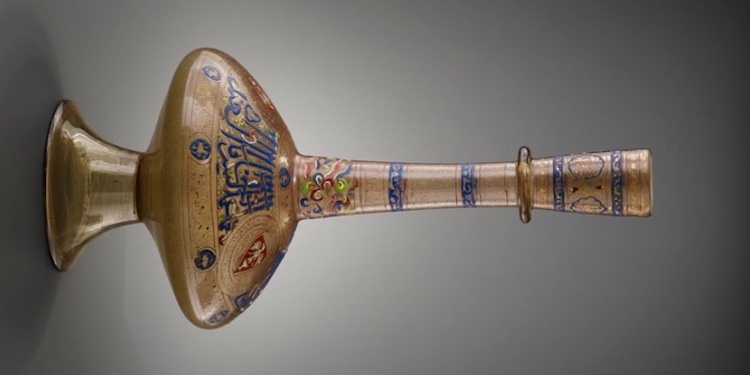 Decorated with enamel and gold, these types of bottles were used as luxury items to decant wine in the 13th and 14th-centuries. The bottle is adorned with a coat of arms - an eagle with spread wings - and is thought to be that of an emir or nobleman in the service of Sultan al-Nasir Muhammad - the ninth Mamluk sultan of Egypt. (We show the bottle sideways, above.) 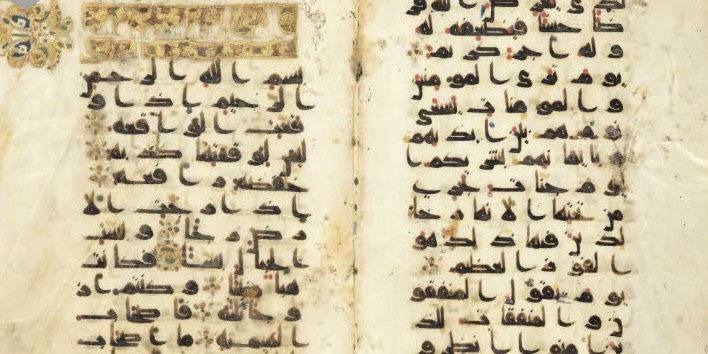 Many of the early copies of the Qur'an are only found in fragments. This rare double folio is from a manuscript charred by fire. The compact text is copied on parchment and is written in dark ink, embellished with colored punctuation marks and gold ornamentation. 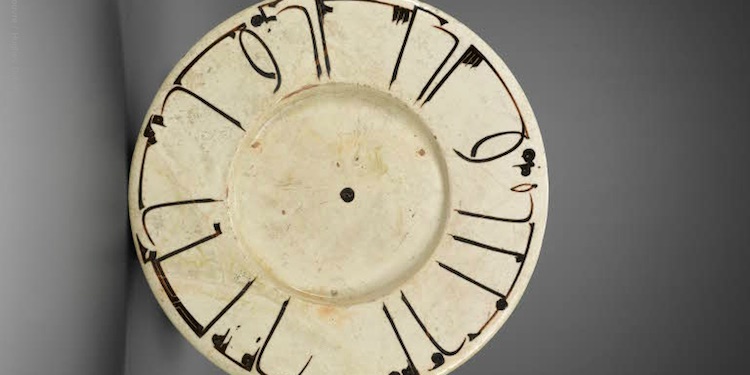 The elegant dish is one of the finest examples of epigraphic decoration characteristic of first-century Central Asian ceramics. Its meticulous script suggests it was done by an expert calligrapher. The inscription is written in Arabic, "Magnanimity tastes bitter at first, but sweeter than honey in the end." 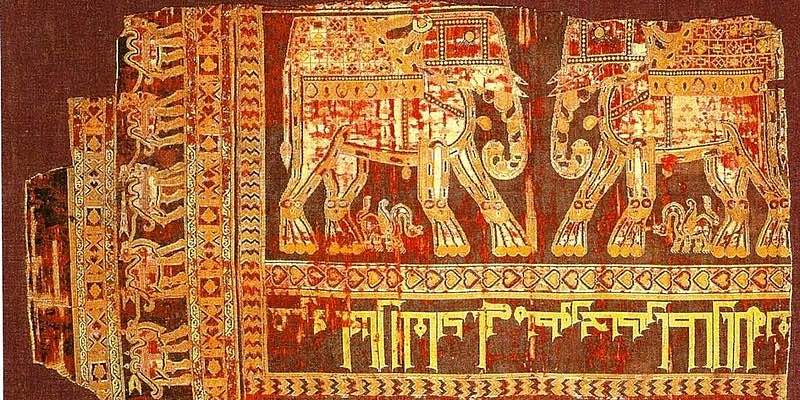 Considered a landmark in early Islamic silk weaving, the fragment is the only known surviving silk textile produced in the royal workshops of the Samanid dynasty of Iran. The story goes that it was woven for the Camel-Prince, Abu Mansur Bakhtegin. After he was beheaded, it was brought back from the First Crusade as a gift to the Abbey of Saint-Josse in Normandy. The rare textile was used to wrap the bones of Saint Josse in 1134. It was transferred to the Louvre after the French Revolution. 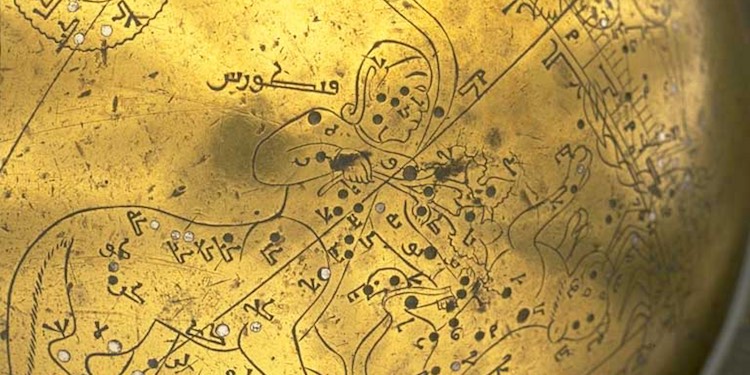 It's the oldest known globe from the Islamic world. According to the inscription, the globe was made by an astronomer or instrument maker. Each of the 1,000-plus stars are represented by a dot of silver, a technique unknown in the West. The celestial globe shows a precise three-dimensional model of the universe, including the Milky Way. 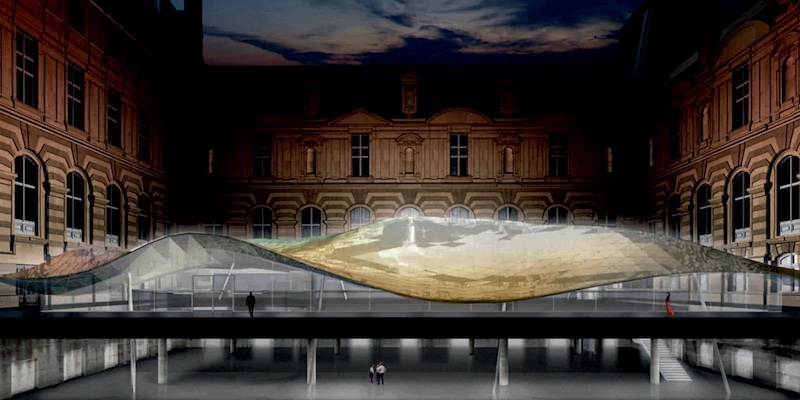 The collection was enriched by many personal donations, including from the Rothschilds. After World War II, the Asian works were moved to the Musée Guimet and the Islamic section merged with the Department of Near Eastern Antiquities. In 1993, the creation of the Grand Louvre made room for the Islamic collection - a decade later, the Louvre announced the eighth department dedicated to Islamic art. The new Islam gallery opened on September 22, 2012 in the restored facades of Cour Visconti.