Thousands of sculptures populate the Louvre. The first room dedicated to sculpture opened in 1824; evolving into the Department of Medieval, Renaissance, and Modern Sculpture. It's thanks to the French Revolution that the Louvre has such a treasure of sculpture. During that conflict thousands of art treasures, including valuable sculptures, were seized from the aristocracy and placed in the Louvre.

Today, the sculptures in the Louvre are spread across a few wings and galleries. The French sculpture collections are on the ground floor of the Richelieu wing, around the covered Puget and Marly courtyards. The international collections are found on the mezzanine and ground floor of the Denon wing. Of course, you'll want to see Venus de Milo and Nike of Samothrace, but here are some other gems worth a detour in one of our favorites sections of the Louvre. 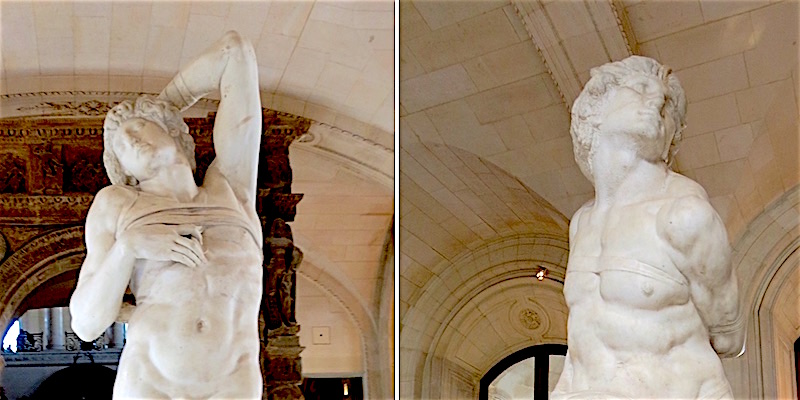 Created in the early 1500s, the two slaves were meant to decorate Pope Julius II tomb but were never finished. Michelangelo gave the unfinished marble sculptures to Roberto Strozzi as a gift for his hospitality during Michelangelo's illness and recovery. When Strozzi was exiled to Lyon, he brought the two statues with him. In 1632, they were sold to Cardinal Richelieu, who had them sent to his castle in Poitou. In 1793, they became the property of the French government and joined the collection in the Louvre. 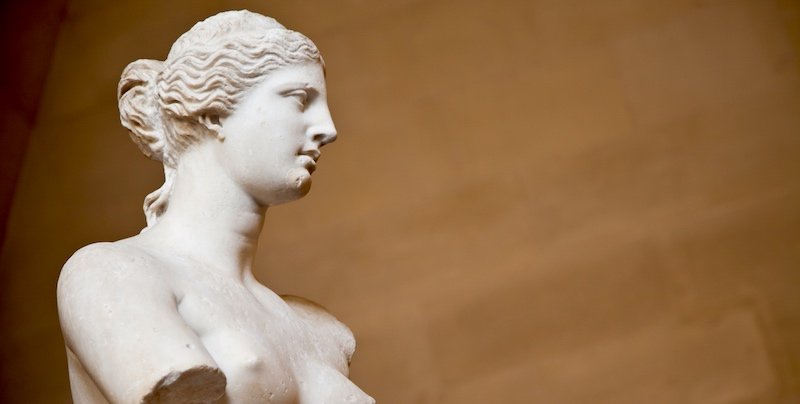 Standing 6'8" tall, she's the world's most iconic sculptures representing the ideal in feminine beauty. She was discovered in 1820 on the Greek Island of Milos and although she doesn't like to mention her age, Venus goes back to the Hellenistic Era. Her real name is Aphrodite (Venus is the Roman name) and she is thought to be the work of Alexandros of Antioch. The statue depicts the Greek goddess of love and beauty. Venus gets her last name from Milos, the island where she was discovered. 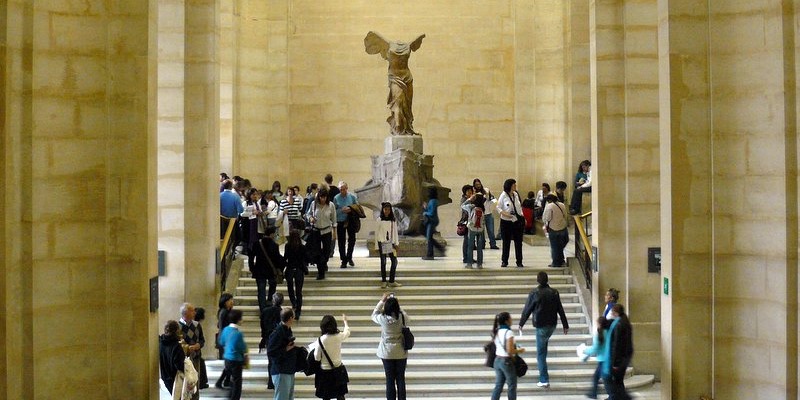 Often called the Winged Victory of Samothrace, Nike stands almost ten feet tall and is one of the most celebrated treasures of the art world. In case you've missed the commercial, Nike symbolizes determination against all odds.

In 1863, while excavating on the Island of Samothrace, a French team discovered hundreds of fragments of a colossal statue. Once assembled it was shipped to the Louvre. The artist is unknown but only a master could have perfected the elegance of the body revealed through its transparent garment and shaped tons of marble into a form so weightless that it looks like it's about to take flight. 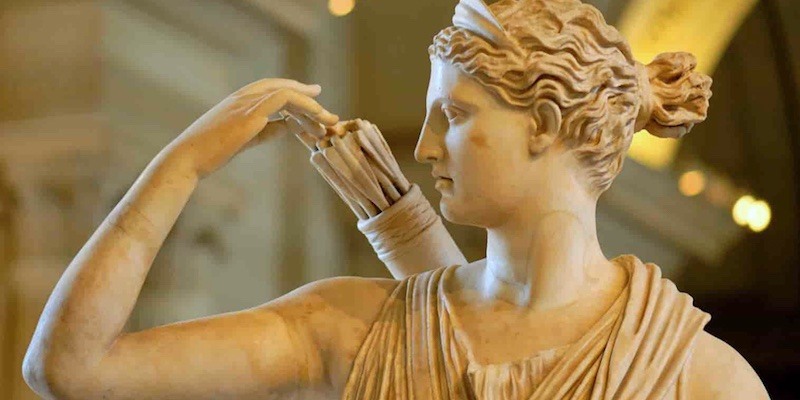 Diana, the Greek goddess of the hunt is portrayed as a confident, athletic hunter. She was first discovered in 1556 in Italy. Pope Paul IV gave her to Henry II of France as a gift. She took a prominent position in Henry's Jardin de la Reine at Fontainebleau and was among the first Roman sculptures to be seen in France. In 1602, Henri IV moved Diana to the Louvre where she was installed in a specially designed gallery. A century later, Louis XIV moved her to the Hall of Mirrors at Versailles. After the French Revolution, Diane Chasseresse took her place again in the Louvre. 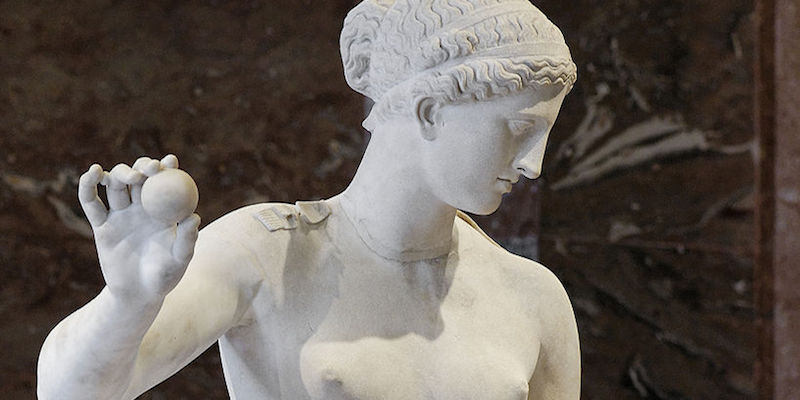 This Venus stands 6'4", is made of Hymettus marble (found near Athens), and dates to the end of the 1st century BCE. Venus was discovered in pieces in 1651 by workmen who were digging a well at the Roman theatre in Arles. The head was found first at a depth of six feet. In 1681, she was given to Louis XIV to decorate the Hall of Mirrors of Versailles. During the French Revolution, Venus of Arles was seized from the royal collection and has resided at the Louvre ever since

An odd thing about this Roman copy of a Greek sculpture is that it was restored in the 17th century by the court sculptor — probably inaccurately. Among other changes, he polished the surface, slimmed the waist, and added the arms and hands. 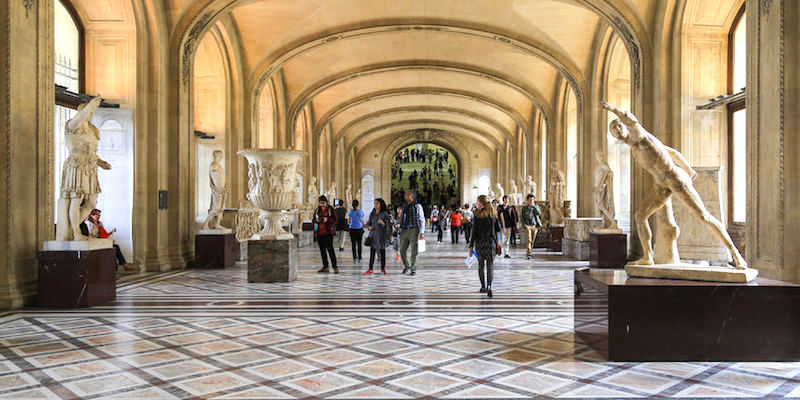 Although named "Gladiator", the statue is actually a swordsman in battle with a mounted combatant. (Seen in the front right of the photo.) Some suggest it's Achilles versus Penthesileia, an Amazonian warrior. The Hellenistic life-size marble sculpture was one of the most copied works of antiquity in the 18th-century. A bronze cast was made for Charles I of England; another is the centerpiece at Wilton House; another version is Jefferson's Monticello.

It was discovered in 1611, south of Rome, in Anzio among the ruins of Nero's seaside palace. From there, the Gladiator was moved to the Borghese collection in Rome. There, it stood in a specially designed room until Camillo Borghese was pressured to sell it to his brother-in-law, Napoleon Bonaparte. It was taken to Paris along with the rest of Borghese collection that Bonaparte acquired for the Louvre. You can see the statue on the right in the photo above.

Sculptures in the Louvre – History

When the Louvre first opened in 1793, only a handful of medieval and modern sculptures were stored in dusty rooms in the Cour Carrée. The Museum of Modern Sculpture began in 1824 with one hundred sculptures displayed in five rooms. There the department languished for a few decades until 1847, when the gallery got a new lease on life with an energetic, forward thinking curator, Léon Laborde.

Under Laborde's leadership important sculptures were brought back from Versailles, rooms were refurbished, the Renaissance collections were transferred to the Cour Carrée, and the Galerie d'Angouleme was assigned to the modern sculpture collection. Most importantly, a new acquisitions policy was implemented. A hall devoted to medieval sculpture was opened and the first new acquisition — the Blanchelande Virgin — was given pride of place, facing the statue of Childebert.