Seven Treasures in the Louvre's Near Eastern Antiquities Department

Covering 9,000 years of history, the Louvre's Near Eastern Antiquities department holds treasures from a collection that stretches from North Africa to the Black Sea through Arabia and as far as the Indian Ocean.

The 19th-century was an exciting time for archaeological digs, with teams of Indiana Jones types in search of treasures that would unearth the seeds of European cultures. What they discovered went far beyond what their imaginations could conceive. Let's take a look at seven highlights of the Louvre's near eastern art collection.

History of The Louvre – Near Eastern Antiquities

The Louvre is home to the world's first Assyrian Museum. The Department of Antiques (as it was then called) displayed thirty-seven monumental pieces discovered by French scientist Paul-Emile Botta from the ancient Assyrian city of Dur-Sharrukin. More French-led archaeological expeditions brought Palestinian and Jewish antiquities; from Lebanon came the core of the Phoenician collection and the first Cypriot collection.

But it wasn't until 1881 that the Department of Oriental Antiquities was officially created. That's the same year that Sumerian works were excavated from Mesopotamia and arrived in France. The ancient Iranian civilizations relics are from excavations at Susa, an ancient city founded around 4000 BCE.

The cultural richness of Mesopotamia, Iran and the Islamic period reached its peak with discoveries of Darius and Xerxes, the great kings of the Persian Empire. In 1886, the first elements of the Palace of Darius were discovered and entered the Louvre.

Phoenician craftsmen made these life-size terra-cotta masks that experts guess were used either for religious ceremonies or theatrical performances. They were also placed in tombs to protect the dead from demons in the otherworld. The mask depicts a grimacing face with lines drawn to show wrinkles. Masks of this kind have been found in Greece, North Africa, and Spain. Grinning or grimacing? You be the judge. Sully Wing, Mediterranean World, Room 18A.

Popular with ancient Egyptian, a sarcophagus held the coffin in the tomb. Typical of Phoenician funeral sculptures from the Persian period, this was the first to be displayed in the Louvre. Originating from Tripoli, the white marble sarcophagus has a sculpted lid and a male head carved in great detail. The nose is prominent and the eyes are almond-shaped with heavy lids and the lips are formed into a slight smile. At least it's not a grimace! Sully wing, the Phoenician kingdoms, Room 17A.

During the Parthian period (2nd to 3rd centuries CE) rulers would have statues of their likeness on display in temples. This bas-relief from Iran shows a king making an offering to the god and protector of the royal dynasties. He is standing with a long cape tied at his chest. In his left hand, he holds a cornucopia and his right arm is extended in a gesture of gratitude and offering. Sully wing, Ground floor, Mesopotamia, Iran, eastern Mediterranean, Room 16.

This statue is a rare example of a worshipper, dating from the 5th century BCE and showing a local dignitary holding symbolic offerings. In his right hand is a small box of incense and in his left hand is what may have been a bird. He wears a wreath of leaves and flower-buds on his head, typical in Cypriot statues. The wreath refers to a religious festival that celebrates the life, death and rebirth cycle. Sully wing, Ground floor, Cyprus, 9th to 1st century BCE, Room 21.

These were the lucky charms, or protective genies, called shedu and they were placed as guardians at gates and doorways of the palace of Dur Sharrukin (present day Khorsabad). Man, bull, and bird are grouped together and were thought to offer protection against enemies. Carved from a single block, it stands 13-feet tall (4 m) and wide. The head is the only human element with the ears of a bull. The eyes are expressive, with thick eyebrows and the mouth has a thin moustache. An inscription between the hind legs of the bull praises the ruler and puts a curse on anyone who seeks to to harm him. Richelieu wing, Ground floor, Mesopotamia, Room 4.

Considered the emblem of the Mesopotamian civilization, the basalt stele was erected by the king of Babylon in the 18th century BCE. It is an important work of art, history, and literature and is the most complete legal document of antiquity dating further back than Biblical laws.

The code covers family law, slavery, commercial & agricultural law, and even sets prices and salaries. The longest chapter covers family issues, which were the foundation of Babylonian society — engagement, marriage and divorce, adultery and incest, adoption and inheritance. More than just a legal content, the code also sheds important light on the society, religion, economy and history of this period. The Code served as a literary model for schools of scribes, who copied it for a thousand years. Richelieu wing, Ground floor, Mesopotamia, Room 3.

The oldest treasure in the Louvre is a rare gypsum statue from Ain Ghazal (a neolithic site in Jordan) dated 7000 BCE. It was discovered in 1985 and underwent a decade-long restoration work in the Smithsonian Institute in Washington before it arrived at the Louvre's Near Eastern Antiquities department in 1997. Sully Wing, Room D. 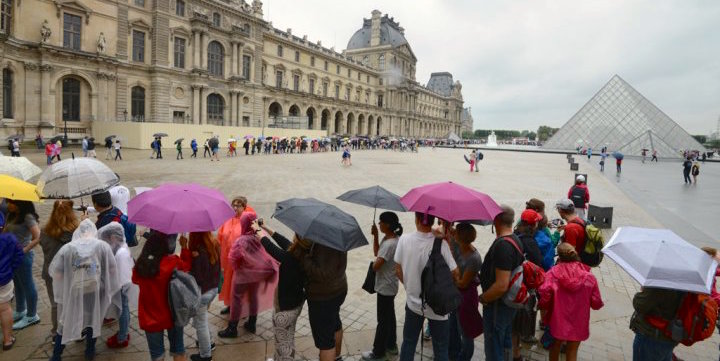 Divided into three areas by geography, the Near Eastern Antiquities department spans both the Sully and the Richelieu wings of the Louvre, covering twenty-seven rooms. Don't miss Room Four in the Richelieu wing — it's where the winged human-headed bull of Khorsabad resides. You'll be surprised by the huge size of some of the archaeological works, but also search for small treasures — rare relics from the first traces of civilization.

If you're like us, you'll want to book a Louvre guided tour that walks you past the long ticket line to show you the best art in overview of the world's largest the museum. Afterwards you'll be able to wander the near eastern department, and other areas of the museum. Take a look at our favorite Louvre guided tour option.