It was Chef Patrick at Le Cordon Bleu who taught us the best duck recipes, using magret de canard. We watched him intently as he used a sharp paring knife to score the fat in a crisscross pattern, without cutting into the meat. Magret are breasts from ducks raised for foie gras. So, as you might expect if you've ever eaten foie gras, the magret breasts have a thick layer of fat that you will render (melt off). In these recipes, you first brown the duck breasts in a skillet and then finish them in the oven. (Make sure to save the rendered fat for making duck-fat fried potatoes.)

As with many duck recipes, this one includes a fruit sauce spiked with tart vinegar and brandy, which contrasts nicely with the rich dark flavors of the duck. In traditional duck recipes, the reduction sauce is made from the cooking juices of the meat. In this version, we've simplified the process so the sauce can be easily prepared before cooking the duck and set aside for use later. 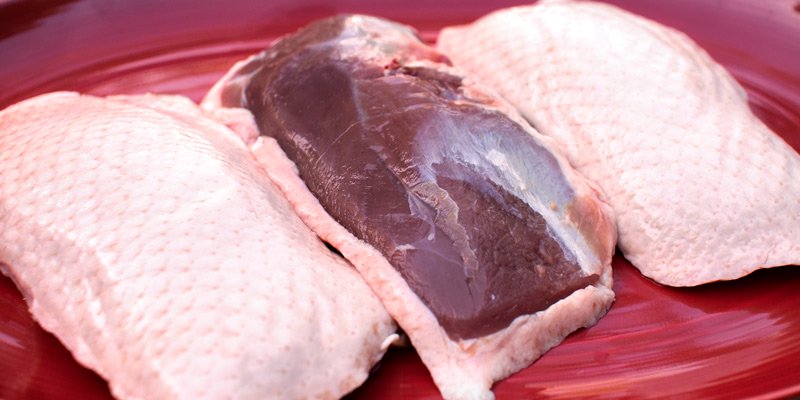 With the duck breasts skin side down on a cutting board, trim off any fat that extends beyond the edges of the meat. Turn the breasts over and, using a sharp knife, score them on the fatty side, cutting about 1/8-inch into the skin in a crisscross pattern. Be careful not to cut into the meat. Season the duck breasts on both sides with sea salt and freshly ground black pepper.

The first thing to do is to melt away most of the fat, and brown the breasts on both side. Place the duck breasts, skin side down, in a skillet and cook over a low heat to render most of the fat. Pour off the excess fat one or two times during cooking. (Save the fat in a container in the refrigerator for future use, hopefully something to do with potatoes.) The fat from the duck will take 10 to 15 minutes to melt down.

Drain off the last of the duck fat, then turn up the heat to medium or medium-high and cook the breasts for an additional 1 or 2 minutes to get the skin more crispy. Turn the breasts over (if needed, add a splash of olive oil) and cook the flesh side for one minute.

Transfer the breasts to a baking dish, skin side up, and roast in the oven for eight minutes for a nice medium-cooked duck with a bit of red inside. When it's ready, rest the duck on a warm plate for a few minutes. Slice the duck breasts thickly on the diagonal and fan out over serving plates, dividing each breast between two people. Spoon on the cherry reduction sauce. 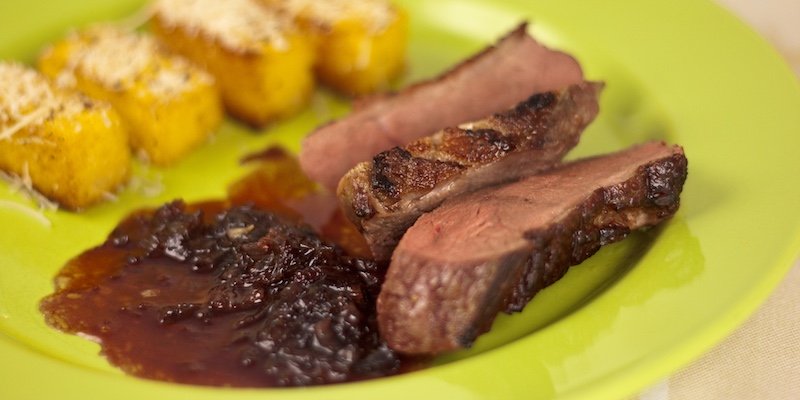 A cherry reduction sauce is perfect with duck. You can start making this sauce before you cook the duck.

In a medium-size skillet, heat the oil and butter until they are sizzling. Add the minced shallots and sauté until they are just brown and almost caramelized. Remove to a plate and set aside.

In the same pan turn down the heat to medium and add the cherry preserves, the vinegar and the brandy. Stir them thoroughly and gently simmer for about 5 minutes.

Now return the cooked shallots to the pan and stir them into the cherry blend until they are completely reheated. Spoon directly on top of the prepared duck breast. Serve immediately.