The True History Of the Eiffel Tower – Competition, Concept & Controversy

In Part 1 of the history of the Eiffel Tower, we told you how Paris planned to celebrate the 100th anniversary of the French Revolution by staging a Universal Exposition in 1889. However, it wasn't until May 2, 1886, a scant three years before the Exposition Universelle was to begin, that the organizing committee finally called for proposals for a fitting monument to be built on the Champs de Mars, the site of the exposition.

Some of the proposals were downright… let's call them "eccentric". To mark the 100th anniversary of the Revolution, one design proposed a giant replica of the guillotine… Rejected. Another designer proposed what was essentially a monumental structure with spouts to shoot out water, to help Paris in case of a drought. Rejected.

Perhaps most bizarre was the proposal for a hulking, 300-metre lighthouse made of granite with lights on the top so bright that anyone in Paris would be able to read a newspaper at night… Rejected. We wouldn't be talking about the history of the Eiffel Tower if any of those had won the competition. Instead, here's what really happened… 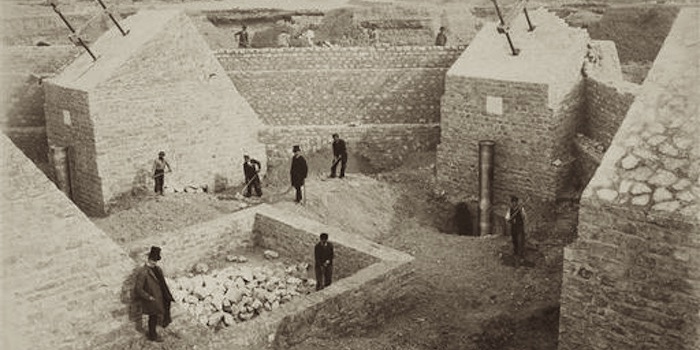 By 1886 Gustave Eiffel was already a famous engineer, and his company was well-known for building iron bridges all over the world. This was a period of history filled with the excitement of science, engineering, and construction. It seemed that whatever you could dream, you could build. And so, in the mind-1880s, two engineers in Eiffel's firm dreamed up a concept for the world's tallest structure – a tower climbing to the unheard of height of 300 meters, 1000 feet.

Using iron bridge-building technology, they produced a drawing of a immensely tall, tapering tower. To illustrate just how tall this tower would be, they included a drawing of famous Parisian landmarks, stacked on top of each other — Palais Garnier Opera House on top of two obelisks on top of the Arc de Triomphe on top of another obelisk on top of the Statue of Liberty (also engineered by Eiffel's firm) on top of Notre Dame Cathedral. Still their concept tower was higher.

For the centenary of the French Revolution, Eiffel's team modified this concept and submitted a design proposal (largely the work of Maurice Koechlin, Eiffel's chief engineer) to the exposition committee, which awarded them first place in the competition. Legend says that the prize was the equivalent of $800! 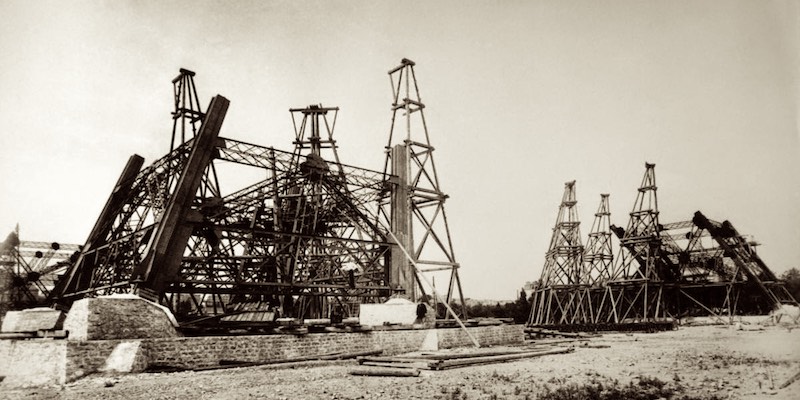 The planning for construction of the tower had barely started when the controversy began. In February of 1887 a group of well-known French artists and writers delivered a petition to the director of the Exposition Universelle condemning the design of the monument to the French Revolution.

Among others it was signed by Guy de Maupassant, the short story writer, and novelist Alexandre Dumas fils, a writer himself and son of the author of The Three Musketeers. The petition was published in the newspaper, Le Temps.

The controversy and condemnation from Paris's artistic community didn't stop there. In 1889 as the tower neared completion, a letter signed by artists (including Dumas once again) called the tower an eyesore and described the "odious shadow of the odious column built of rivets and iron plates, extending like a black blot".

History of the Eiffel Tower 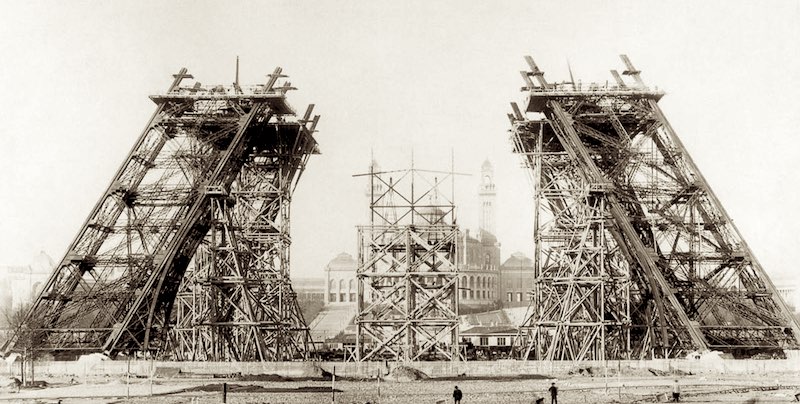 The man behind the Eiffel Tower, Gustave Eiffel, was no stranger to controversy. Interestingly, he was born Gustave Bönickhausen in 1832 in Dijon, and changed his name to Eiffel after he had already started his career. While he and his company were most well known for steel bridge construction, Eiffel also designed the interior structure for the Statue of Liberty, France's centennial gift to the USA.

In 1887, while the Eiffel Tower was being built, Gustave Eiffel helped with a plan to build a canal through Panama. The French Panama Canal Company proposed to construct a canal through a series of locks, and Eiffel was enlisted to design the locks. Due to corporate mismanagement, however, the project collapsed, with enormous losses to investors and creditors. Charges were brought against the principals of the company, including Gustave Eiffel. Even though he was innocent and subsequently acquitted of any wrongdoing, Eiffel's reputation suffered.

After the Eiffel Tower project, the company continued to design and build structures all around the world. In addition to advances in construction engineering, Gustave Eiffel also did pioneering work in meteorology and aerodynamics. Eiffel built a wind tunnel on the Champs de Mars and used the Tower itself for experiments. Just another fascinating tidbit from the history of the Eiffel Tower! 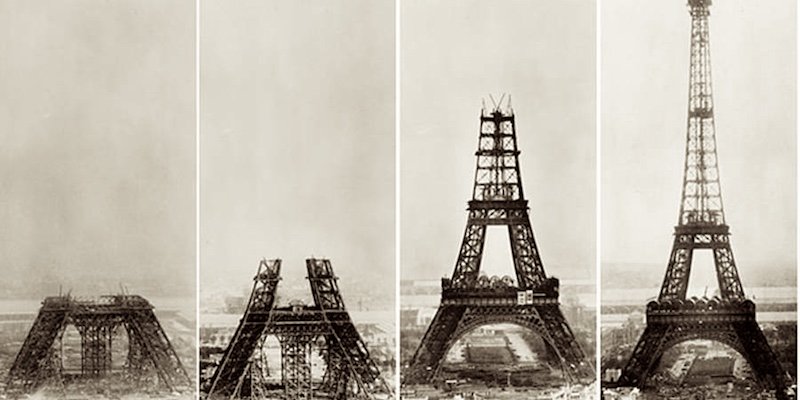 It took two years, two months and five days to complete the construction of the Eiffel Tower and it opened on May 15, 1889, just three years and two weeks after a Centenary project had been proposed.

The Exposition Universelle of 1889 ran from May 6 to October 31. During that period over two million people visited the Tower, many of those going right to the top, to the third level. At that time elevator technology was such that the trip from Level 2 to Level 3 was split into two parts. About halfway up visitors had to leave the first elevator and walk across an open catwalk to the second stage elevator. Reportedly, the views (which you no longer get to experience today) were fantastic.

The Eiffel Tower achieved the designers' dream of creating the highest structure in the world. Before the Tower the world's tallest structure was the Washington Monument at 555 feet (172 meters, just over half the height of the Eiffel Tower), and that had taken more than 36 years to build. It wasn't until 1930, with the construction of the Chrysler Building in New York City, that another structure rose higher – by five meters.

The Best Way To Visit The Eiffel Tower 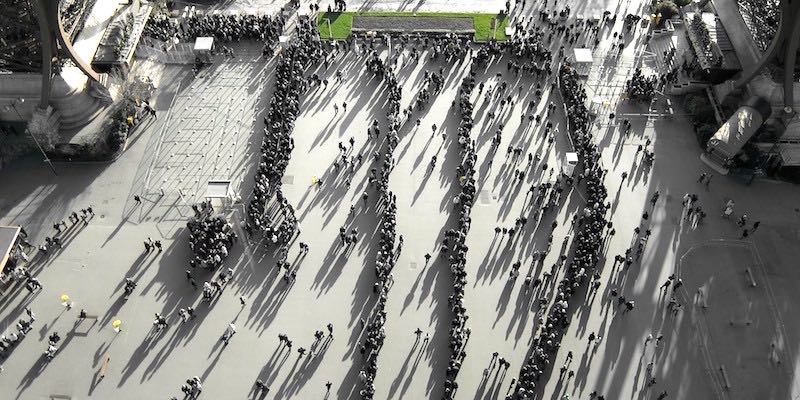 It's worth mentioning again that the Eiffel Tower is the most visited monument in the world, and the line-ups are daunting. There's always a wait and you must expect to stand in line for two hours or more.

So, you want to have a plan before you arrive. We know from experience that the best way to avoid the lines is to book a tour before you leave home. Your guide will whisk you past the crowds, into the elevator and up the tower. You don't want to waste your time in Paris waiting in lines!