French Oysters – The Armoured Kings Of The Sea

That's right, "kings". We called caviar "The Queen of French Foods" so we can certainly anoint these maritime delicacies as well. The French eat more than 130,000 metric tonnes of oysters each year and the country produces over 150,000 metric tonnes annually. That means (if you do the math) les français eat nearly 90% of the total production. (That's probably not counting us, though — we're sure we account for a tonne or two.)

Along with foie gras and caviar, oysters define luxury French food. During the Christmas holidays, you can expect to find this holy trinity of French foods on a lot of menus. (Along with champagne, of course.) On our very first Christmas in France we learned to love platters of fresh oysters, cracked open and served on a bed of ice with seaweed garnish, slurped down with a crisp Sancerre. French oysters simply taste better. 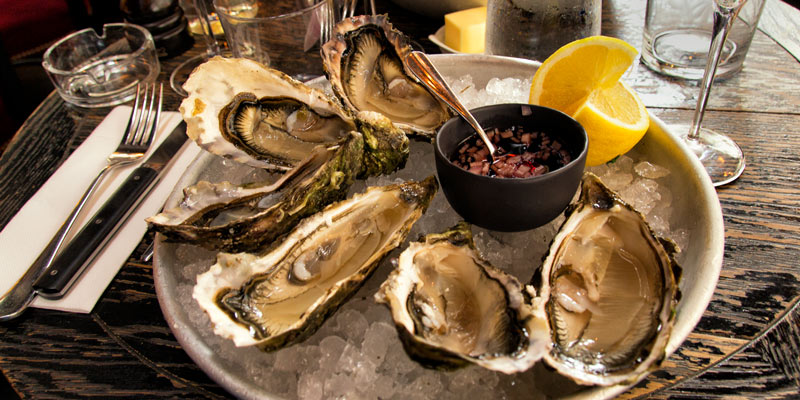 Oysters are as traditional to the French at Noël as turkey is to North Americans. On our first Christmas there, at the wine cooperative in Beaumes-de-Venise, we read a poster with a picture of oysters piled up to look like a Christmas tree with the slogan, "Noël sans Huîtres? Pourquoi pas sans arbre, pendant que vous y êtes!" It took us a few days days and a serendipitous phrase in a dictionary to translate this as: "Christmas without Oysters? Why not without a tree, while you're at it?"

No country in the world offers a more varied oyster experience than France. France was the first country in all of Europe to start cultivating oysters on a large scale and they take it very seriously. More than 2,000 miles of French coastline, and about 3,400 French oyster growers translate into an estimated 520 million Euros in sales each year.

Not only do the French produce the majority of the oysters in Europe, they are also consume most of their harvest. 86% of the oysters produced in France are consumed by the French, and about half of the annual oyster production is consumed between Christmas and New Year's Day.