On A Seine River Lunch Cruise – A Delightful Afternoon In Paris

What's the best way to experience Paris? Not by bus, not the metro, not even on foot. From a boat sailing down the Seine. But not just any boat. The best way to truly see the glories of the city of Paris is on a lunch or dinner cruise along the city's famous river. It's from this vantage that you will understand the importance of the Seine and how many of the city's monuments are located by the banks, just for your enjoyment (or so it seems).

We used to think a Seine river lunch cruise would be too touristy, that it would be an activity just behind riding atop an open-air bus. But were we wrong (on both counts). On a cloudy, cool day in late October, we walked the thirty minutes from our apartment in the 7th (on Rue St-Dominique, near the Eiffel Tower) to the banks of the Seine at Port Solferino where a La Marina de Paris specially-designed dining boat awaited us for a lunch cruise. 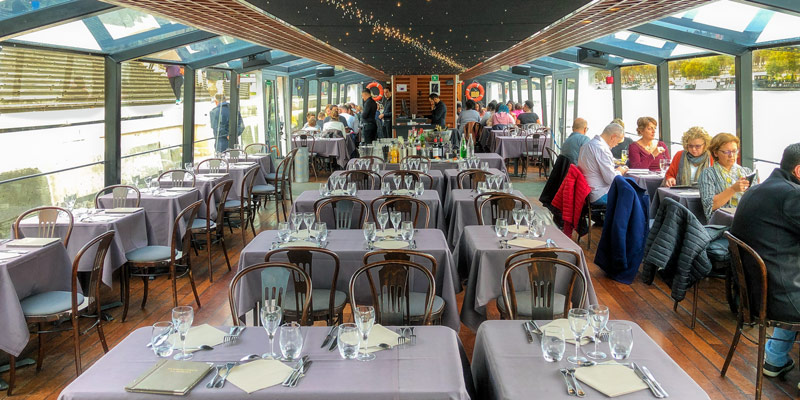 Our voucher was loaded on our phone, so there was no need to stop at the ticket office next to the bateau, on the dock just below Musée d'Orsay. At the door of the boat a greeter validated our voucher and invited us inside. We recommend you arrive 20 to 30 minutes in advance, as seating is on a first-come, first-serve basis. The seating is a bit tight, and the window seats are the most valuable. Your porter will help you to your table; if you are seated in the center, you can ask if a window seat is available.

Settling in is the hardest part of this experience. While we waited for he boat to sail the music being played was a tad loud, we worried the the meal was not going to be up to Parisian standard, etc. But once the boat started moving and the rock music was replaced with an officially-appropriate Seine River music track, everything looked brighter.

As soon as the boat leaves the dock, you're spellbound by the view outside your window. As the waves gently lap at the boat, you are taken on a delightful trip past everything wonderful about Paris, starting with Musée d'Orsay. You'll also know what we mean when we say the best way to appreciate this former train station is by viewing it from the river.

It's All About the View 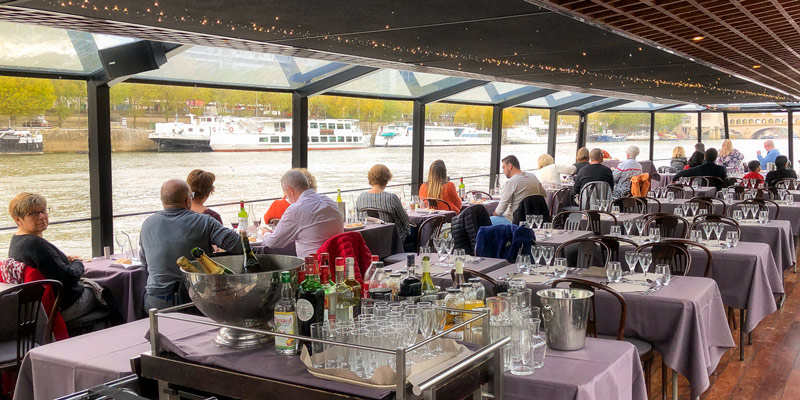 On the port side (your left) are the Jardin des Tuileries and the Louvre Museum. From here it's apparent just how close the two museums are to each other. As you sail upstream the greatest hits of Paris unfold before your eyes. Here is Square du Vert-Galant, the pint-sized park honoring Henry IV on Ile de la Cité Paris. There is the Conciergerie, where Marie Antoinette was kept prisoner before she was beheaded. Just beyond is Notre Dame Cathedral, now under repair following the disastrous fire.

While taking in all this drama and history you're also being served a classic French three-course lunch. This is the real thing with a linen tablecloth, glassware, napkins, and elegant cutlery. We were pleasantly surprised, since our expectations were low (imagining what we would be served if we were back home in a tourist destination).

We enjoyed the tasting starter course (entrée). On a white plate divided into sections was a selection of four delicate starters — a cucumber salad, a tart the size of a palm filled with the goodness of Provence including roasted red peppers and golden pine nuts, a scallop dish with finely-chopped potatoes and a garnish of micro-shavings of seaweed and lime, and the ratatouille, a fragrant melange of roasted eggplants, tomatoes topped with a seared tiger prawn. Also on offer was a generous portion of smoked salmon on a blini with artichoke spread.

The plat, or main course, was served just as we passed the point where Canal Saint-Martin flows into the Seine River. (The canal was a project launched by none other than Napoleon). We can recommend the entrecôte with green peppercorn sauce; the beef was grilled to perfection, the sauce was delicate, and roasted baby potatoes and sautéed vegetables rounded out the plate. 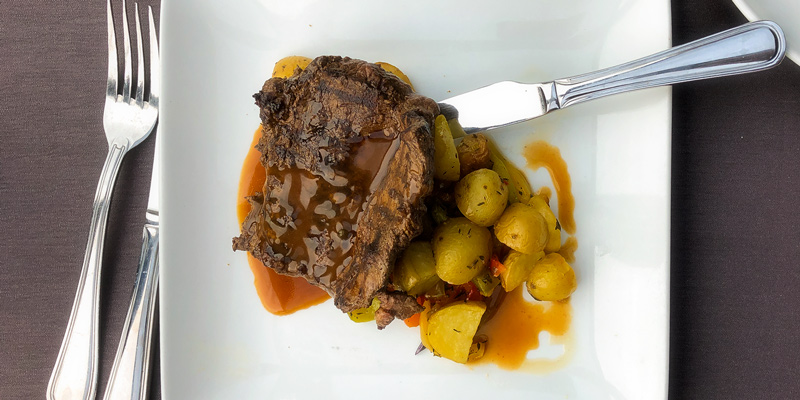 Dessert was served just as we were gliding under the awe-inspiring gilt bridge, Pont Alexandre III, that debuted at Paris Exposition Universelle of 1900. A trio of just-right portions of desserts were presented on a white plate — a delicious, cream puff with an apricot topper; a dense, flourless chocolate cake with gold decoration; and a tiny bowl filled with chopped berries, pineapple, and a mint leaf. 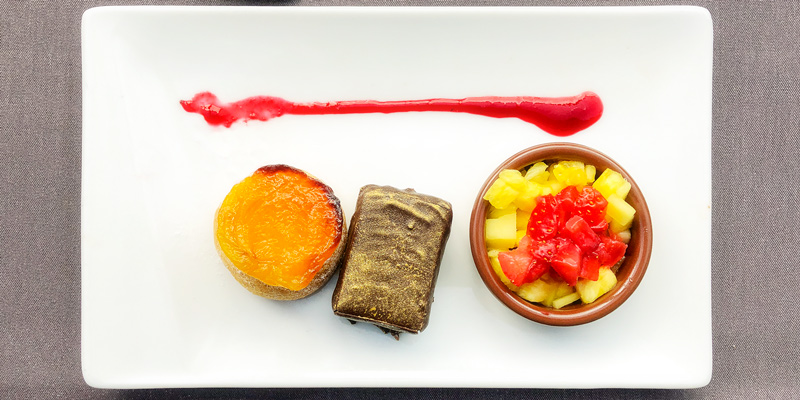 As we circled back on the river towards the the Statue of Liberty at Pont de Grenelle (one-quarter the size of the one in NYC), the captain announced the dance floor was open. It was wonderful to see groups of kids, grandmas, aunts, and uncles hit the aisles for bit of impromptu boogie to the songs of Adele and Lou Bega.

The 90-minute lunch cruise is a bargain, given the quality of the food and the relaxing, scenic Seine river cruise. Choose the drinks option and you'll be rewarded with half a bottle of French wine per person.

As we disembarked, we thanked the server and said how surprised we were by the quality of the meal. "Our food is made from fresh ingredients and is made with care," he told us. "This boat isn't just for tourists, many French people, even Parisians, sail with us."