The Hotel Bristol Paris – A Palace In The 8th Arrondissement

For nearly a century, the Hotel Bristol Paris has been an institution on the fabled Rue du Faubourg Saint-Honoré. It's also one of the few luxury hotels in the world that has two cats on its payroll. Kleopatre & Fa-Raon roam the the lobby, lounging on Louis XVI sofas. They have come to symbolize the homey atmosphere that Le Bristol seems to achieve effortlessly. 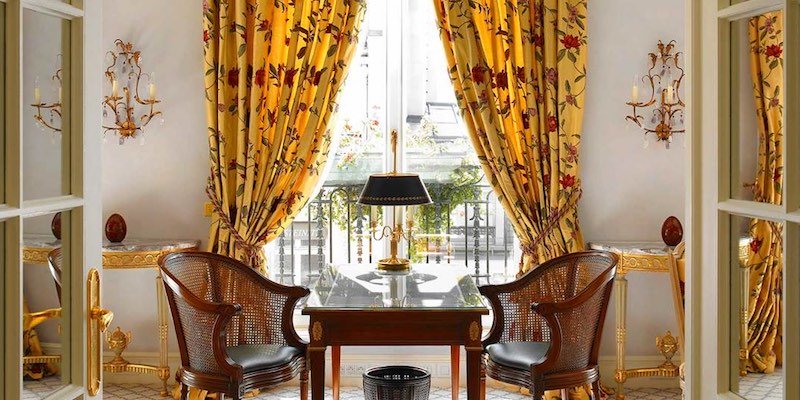 But there's really nothing effortless about retaining the hotel's designation as a Palace, the highest accolade achievable in France — it's hard work by dedicated staff. Elegant, oozing with French charm, luxury, and perhaps the best customer service in all the land, Le Bristol may be le plus chic, le plus discreet hotel in Paris.

What You Can Expect at Hotel Bristol Paris

There are 188 luxury rooms, many of them overlook the inner courtyards, a few have Eiffel Tower views, and all are sound-proofed from the noise of the street. Rooms have a feminine touch with floral fabrics integrating the hotel's trademark colours, verdant green and dark pink..

Each room is finished with a classic mix of chandeliers, Regency-style furniture and neutral walls. The bathrooms are spacious, with pale marble and large showers and deep soaking bathtubs. Choose from Superior, or Deluxe, or the most spacious rooms, Prestige. But, if you really want to go luxe, go for the Imperial Suite.

Spanning 3,445 square feet (340 m²), the Imperial is the Bristol's largest suite. The dining room, with Versailles parquet floors, overlooks the French-style garden and can accommodate up to twelve (lucky) dinner guests. The furniture is from Maison Taillardat; they make luxury furniture based on 18th-century designs. The fabrics are from Manuel Canovas who specializes in French luxury weaves and prints. On the walls are paintings from the 18th century French rococo painter Jean-Baptiste Pater (1695-1736).

Other Suites at the Bristol

Not in the mood for Imperial? (Although we can't imagine why not!) Here are other suite options —

The multi-level spa is filled with natural light and fresh air, especially if you book a treatment in a private garden terrace room. Sone of The Duo cabins come with their own Turkish or whirlpool baths and a private balcony terrace. 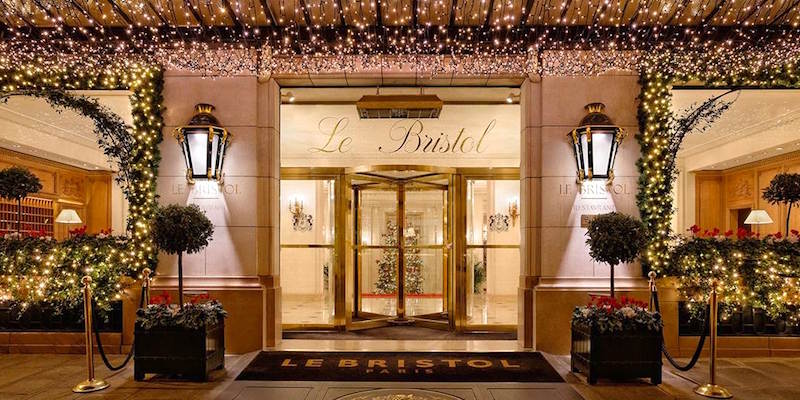 Starting in 2010 a lengthy $130 million facelift restored a youthful, lighter glow to the 85-year-old grande dame. While much of 19th-century French regalia remained — French fabrics and gilded ceilings that date to pre-1925 — the new Bristol enhanced its best assets. The views from the Eiffel Tower rooms were expanded with floor-to-ceiling windows. The Epicure restaurant was completely redone with romantic tables overlooking the leafy courtyard.

New touches in the suites are paintings by French masters, a private gym, and a lavender and white bedroom. The hotel also added two apartment-style suites, reachable only by an original wrought-iron elevator.

One feature that didn't change is the historic main elevator designed by Jewish architect Leo Lerman during World War II. Lerman spent the war years hiding in the Bristol, designing rooms and the elegant ironwork cage elevator. The good news for Lerman was that the Bristol was one of the only hotels in Paris not taken over by the Nazis during the German occupation. 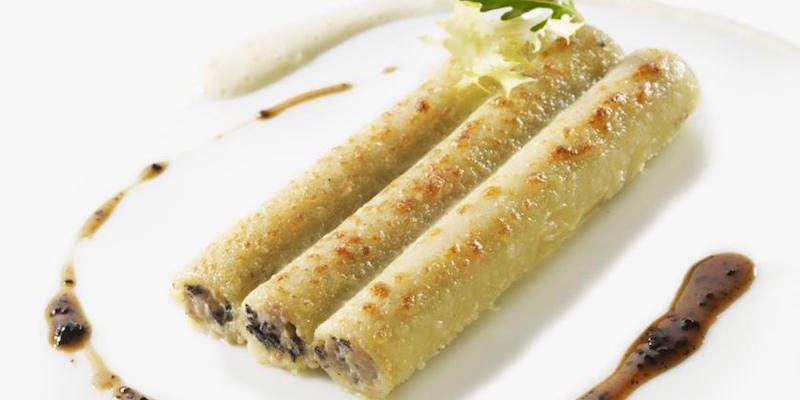 The jewel in the hotel's crown is Epicure, the 3-Star Michelin restaurant under the watchful eye of French super chef, Eric Frechon. Chef Frechon joined the Bristol in 1998 and has guided the restaurant to win loyal followers and star after Michelin star. Epicure has held 3 Michelin stars continuously since 2008. When Nicolas Sarkozy was in President of France, this was his lunch canteen. (The Presidential Palace is just down the street.)

There's little disagreement that Epicure is one of the best restaurants in Paris. And even if you can't afford to stay at Le Bristol perhaps you can splurge on a multi-course tasting menu that will only set you back a few hundred Euros. Epicure's dining room overlooks the courtyard and doubles as the breakfast room.

The more casual dining option is the hotel brasserie, 114 Faubourg. Popular as a lunch spot for locals and hotel guests, 114 Faubourg has a Michelin star of its own. Before it was taken over by the Bristol, it was a bank; what used to be the safe is now the wine cellar. The tasting menu at 114 Faubourg can be had for round about 100€.

Cozy up in the old-world charm of the Le Bar du Bristol and order one of their signature cocktails: the Old Fashioned N°10 with 12 year old rum, coconut and cane sugar, Provencal Daiquiri with Havana Club rum, lime, lavender bitter and cane sugar or Rhubarb Fizz with Belvedere vodka, lemon, rhubarb juice egg white, and lemonade.

Along with the drinks order a few tapas — blinis with caviar and sour cream, foie gras toast or shrimp tempura. Le Bar is open seven days a week from 5:30 PM to 2:00 AM.

"I'm a control freak," says Eric Frechon. Frechon loves to use common ingredients like mackerel, chicken and then elevate them using complex techniques. One of his specialities is whole roast chicken, cooked at a low temperature in a pig's bladder, with a few truffles hiding beneath the skin.

History of the Hotel Bristol Paris 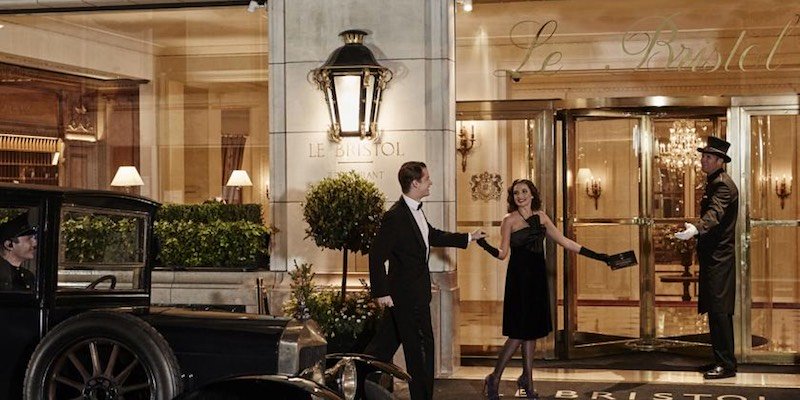 Opened in 1925, Le Bristol has pedigree. The 19th-century building, with its antique furniture, Gobelins and Lille tapestries, and classic paintings, has certainly seen its share of celebrities parading through — Grace Kelly, Orson Welles, Josephine Baker, Mick Jagger, Harry Truman, George Clooney, David Beckham… we've eaten there as well! (Though not with Mick.)

The hotel started life as a private residence for French dandy, Jules de Castellane, during the Second Empire period under Napoleon III. Thankfully, the idea of demolishing his mansion was opposed and in January, 1925, the Hotel Bristol opened its doors. The man behind the legendary hotel's beginnings was Hippolyte Jammet, who held the reins between the Roaring Twenties and World War II. Today, the hotel is privately owned by one of Europe's wealthiest families, the Oetkers. 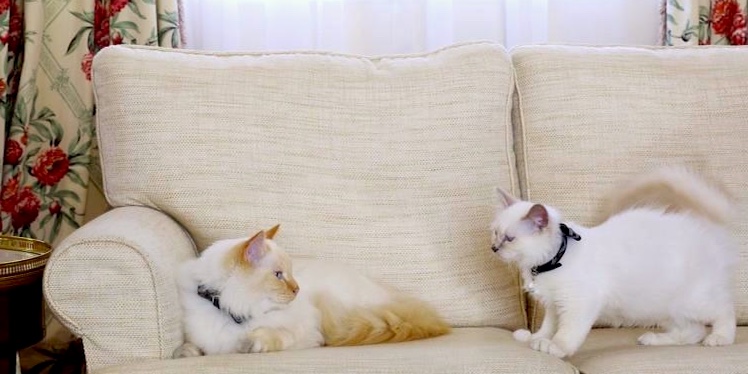 In 2011, on the heels of their massive renovation, the Bristol was the first Parisian hotel to be awarded the Palace status by the French Ministry of Tourism. In 2016, they once again received the Palace distinction and will keep it for at least the next five years.

In 2016 the Epicure received the Wine Spectator Grand Award, recognizing the best selection of wine in the world.

Travel+Leisure magazine has also name the Bristol the world's best in the following categories — Best Hotels in the World, Best City Hotels in Europe, and Best Hotels in Paris.