Profiteroles – A French Dessert That's Easy To Make At Home

Profiteroles — crunchy, airy, chocolatey, creamy & scrumptious. A trip to Paris is certainly going to include sampling of these and other famous French desserts. In fact, you could have several desserts a day and never duplicate the offerings. But even with all those desserts, the one that Parisians continue to be mad about (and we join them in this frenzy), are chocolate profiteroles. Here's an easy recipe for profiteroles that will be just like the ones you find at Paris restaurants, cafés and patisseries.

We'll never forget our first real profiteroles in Paris. With one hand, the waiter put down a plate of three luscious puff pastries, each filled with vanilla ice cream. In his other hand was a silver jug, from which he poured a generous amount of hot chocolate sauce, which went to work immediately melting the ice cream. In our version we use a luscious chocolate sauce with just a touch of Fleur de Sel. 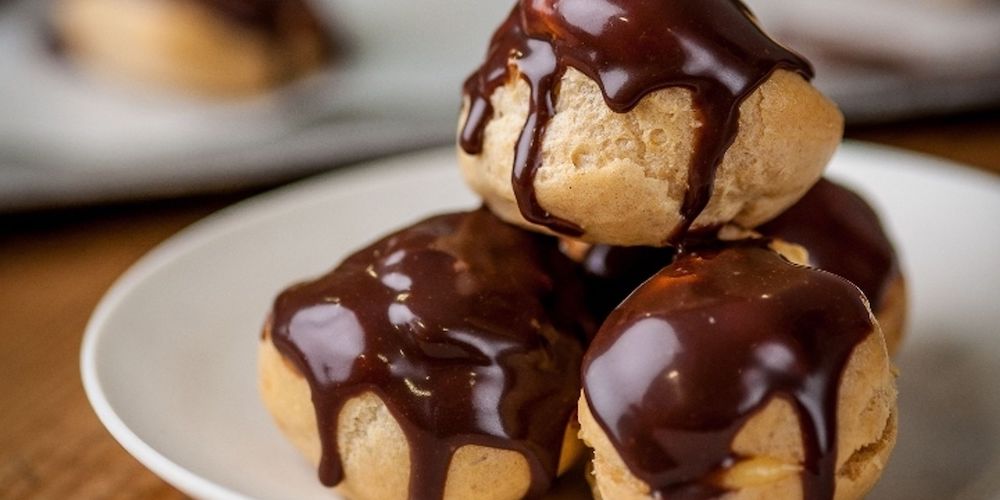 In a medium heavy saucepan, mix the water, butter and salt and bring to a boil.

Remove the pan from the heat and add spoonfuls of flour, mixing until all the flour is incorporated. After the flour is completely blended, return the pan to medium heat. Stir constantly until the mixture becomes sticky and pulls away from the sides of the pan, about two to three minutes.

Remove from the heat, cool for a minute, and then stir in the eggs, one at a time, completely mixing before adding the second, beating vigorously. The dough is now ready to be baked. Using a teaspoon, place the pastry onto a prepared baking sheet in small dollops.

Just before baking, brush the tops with the beaten egg whites to give them a glossy appearance. Set the baking sheet on the middle rack, reduce the heat to 375° F. and bake for 20 minutes or until they have puffed and are firm and golden brown.

Remove from the oven but do not remove them from the tray. Using a small knife, cut a slit in the side of each puff to release the steam, (otherwise they will become soggy). Turn off the oven and open the door. Return the pastries to the oven, (with the door open) and leave them for another ten minutes to dry out. Then, cool on a rack. 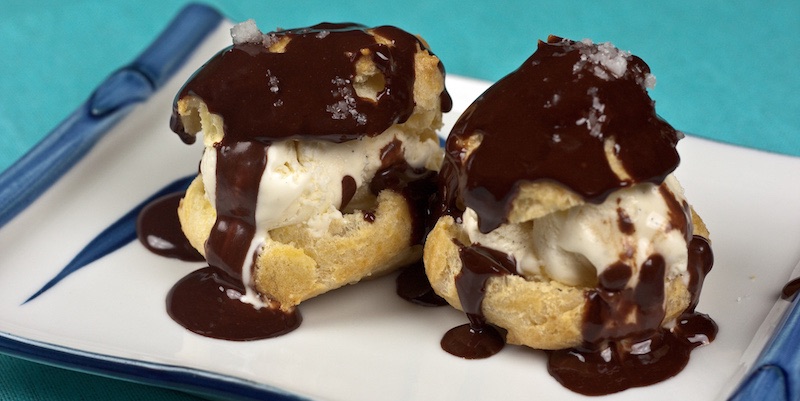 Break the chocolate into small pieces and melt slowly in a small pot or, better yet, a double boiler. Stir in the heavy cream until well blended. Stir in the Fleur de Sel. Transfer the hot sauce into an attractive pouring dish and set it on the table.

Place 2 pate a choux in each serving bowl. Cut them in half crosswise, almost, but not all the way, through. Add a small scoop of ice cream in the center, the ice cream should not overwhelm the pastry, so go easy.

Set a serving before each guest and then pour the hot Fleur de Sel chocolate sauce directly on top of the profiteroles for a dazzling dessert.

This basic recipe for pâte à choux can be used in many French dishes – for profiteroles or chocolate eclairs or as savory hors d'oeuvres. Add a cup of grated gruyère to the recipe and you've got gougères — glorious cheese puffs.