Hotel Muguet Paris – A Top Hotel Near The Eiffel Tower

When Rick Steves speaks, people listen. Hotel Muguet in Paris has been anointed by the popular travel writer as a top place to stay in the Eiffel Tower neighborhood. We, too, have a soft spot for the charming neighborhood in the 7th Arrondissement, close to the Tower as well as Champs de Mars, the wonderful market street Rue Cler, and the lively shopping street of Rue Saint Dominque. 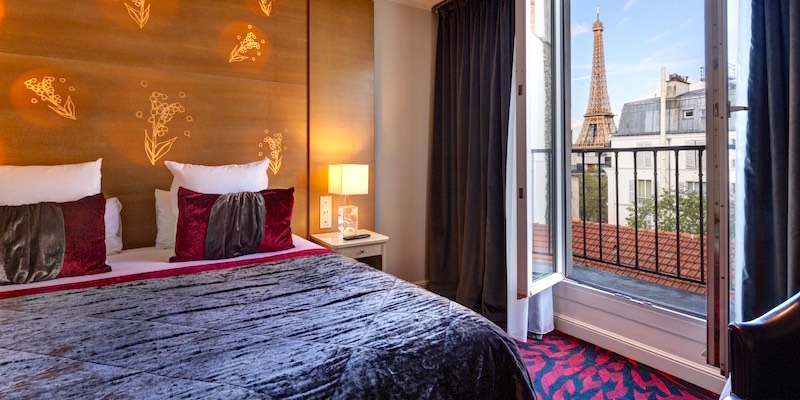 And we're not the only ones who think so. Hotel Muguet Paris is usually booked well in advance. So take note — if you're interested in staying here, you'll need to book as early as you can.

What You Can Expect at Hotel Muguet

Behind the pink-painted brick exterior of this recently renovated hotel are forty-five calm and comfortable rooms with TV sets hung high on the wall. The rooms are well-decorated in soft shades and French furnishings, and are equipped with large wardrobes (rare for Paris hotels). The owners of Hotel Muguet actually live at the hotel, which helps explain the high standards.

The bathrooms are a good size, comfortable and very clean. Breakfast is served on the veranda, with fresh coffee, croissants, scrambled eggs, ham, yogurts, cereals and toast.

Some travelers have commented on the small size of the rooms. However, they also say that the service is outstanding. Remember that Paris hotel rooms are small everywhere in the city, with the possible exception of some of the five-star hotels.

Hotel Muguet is situated close to many major attractions and museums. You will be within walking distance of the Eiffel Tower, Invalides, Musée Rodin and the many boutiques, shops and restaurants on Rue Cler.